Skip to Content
Written by Logan Michael in Behavior last updated April 2022
BetterWithCats.net may earn a small commission when you use one of the links on this page to purchase. 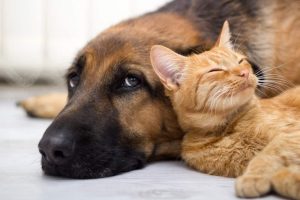 With all the funny things our cats do, it can already be difficult to really interpret and understand all their behavior. But when you add another animal into the mix, things can get really confusing and while cats and dogs can most certainly get along it’s not without the occasional bump in the road.

It’s not uncommon for cats to lick dogs but sometimes that licking to turns to biting, especially around the neck.

But why would a cat bite a dog’s neck?

Most cats bite a dog’s neck as a form of enthusiastic grooming or play. It’s unlikely to be a form of aggression and cats will only bite aggressively as a last resort. Paying close attention to the body language of both the cat and dog can help you easily figure out what’s motivating your feline.

But let’s take a closer look at what’s going on here and how you can determine what explanation makes the most sense for your feline friend.

What's Inside show
Reason 1: Grooming
Reason 2: Playtime
Reason 3: Love Bites
Reason 4: It’s A Leftover Kitten Instinct
Reason 5: It Could Be A Form Of Obsessive Compulsive Disorder
Why It Probably Isn’t About Aggression
It’s Probably Not About Dominance Either
How To Stop The Behavior?
Closing Thoughts

When we think of grooming, we usually just think of licking and a cat’s rough tongue is typically enough to do the job. But biting, nibbling and even a little chewing are all a part of grooming too, especially when there’s something caught in the fur.

Other times, enthusiastic grooming can turn into biting, and this can happen not only with dogs but also with cat-to-human interaction where licking can often turn into light bites.

Grooming is usually the most likely explanation if your cat’s biting is proceeded by licking while your cat shows loose relaxed postures. Grooming bites are usually quick and cats will primarily use the front of their mouth. In many cases, cats will appear to nibble the dog’s neck as part of their grooming bite and this is how cats break up clumps of fur

When grooming is the cause of a cat biting your pup’s neck, there’s usually nothing to worry about. If the dog doesn’t like the interaction, they can get up and walk away but you might be surprised at just how many dogs will enjoy a little grooming from their furry roommate- even if it includes the occasional nibble!

Most cats are ready to play at a moment’s notice and if they’re experiencing a case of the zoomies, it’s not going to take much to put them into full play mode. Other cats don’t need zoomies as an excuse and they’re ready to bop your ankles or your dog’s wagging tail anytime they see it!

These playful felines may also be more likely to bite your dog’s neck as part of their play routine.

But why the neck?

In many cases, the neck could simply be the most available part of the dog. When dogs lay on their side (one of their favorite sleeping positions) their head is stretched out and their neck is exposed. It’s also a soft spot usually with loose skin that cats can get a hold of. What’s not to love for a cat?

However, there could be an even deeper explanation. Because play mimics your cat’s predatory instincts, it’s possible that cats are going for the neck just based on their natural instincts and wild cats bite the neck to kill their prey. Just to be clear, that doesn’t mean your playful cat is trying to hurt your dog with their bite. Instead, they’re just playing the same way that they’d hunt.

Playful bites can sometimes be hard to identify since your cat’s body language may look aggressive with ears low, wide eyes, and tight postures. It’s important to look at context clues to figure out what’s going and if your cat goes from chasing beams of light in the kitchen to chomping your dog’s neck it’s probably safe to say that your feline is in play mode.

Play bites are also usually (but not always) a bit longer and playful cats will usually chomp down and hold onto the dog’s neck for a few seconds.

Love bites are one of the most misunderstood and downright confusing aspects of feline behavior. If you try to translate this to the human world you might end up with something like a love slap which probably doesn’t sound very appealing.

But what are love bites in the cat world?

According to Dr. Karen Becker, a little nip is a completely normal way of saying they love you and a common sign of affection but unfortunately “your cat doesn’t understand her love bites aren’t always pleasant for you.”

These kinds of cat bites are actually a normal part of how cats (but especially kittens) interact with each other. Dr. Becker goes on to explain that “kitties nip each other affectionately, and their skin is tougher than ours.” So it’s kind of like kitty kisses!

Love bites can happen in all kinds of unexpected scenarios and some cats absolutely love giving the nose a little nibble to show their love- even if it’s a little confusing for us. Your dog might be just as confused by these bites are you are, even more so when they occur on the neck.

To help you identify a love bite, whether it’s on your hand, your hair, or your dog’s neck you can check out this video for some great examples:

If your cat is both kneading and biting your dog’s neck, it’s possible that their leftover kitten instincts are at play. There are several reasons why a cat may knead a dog, but it’s most experts agree that it’s probably a combination of a self-soothing behavior and a drive to claim territory.

Cats typically prefer to knead areas that are soft, smooth, and have some type of similarity to their mom’s stomach where they first started kneading to produce milk. That’s why so many cats love to knead and bite blankets but it also explains why a dog’s neck could be so appealing for the kneading and biting combination. After all, a dog’s neck is soft, furry, and not that different from their mom’s belly!

Biting that’s related to kneading is usually characterized by small bites and many cats will even suckle. In most cases, this isn’t a problem for dogs and they may even enjoy it. But if cats get a little too eager, they could remove fur or irritate the skin around a dog’s neck however most dogs will get up and walk away before this happens.

Reason 5: It Could Be A Form Of Obsessive Compulsive Disorder

In rare cases, your cats may bite a dog’s neck as a result of obsessive compulsive disorder or a similar condition. Just as with humans, cats with OCD can become obsessed with specific activities which can include biting your dog’s neck.

OCD is a complicated subject but if you notice your cat making a great deal of effort to bite or suckle your dog’s neck, even after your dog has gotten up and walked away, then OCD or some other form of anxiety could be a factor.

However, don’t jump to conclusions too quickly and this is definitely the least likely explanation.

Why It Probably Isn’t About Aggression

One of the big concerns around any type of cat biting is that it’s related to aggression, even more so when it’s around your dog’s neck.

But in most cases, aggression probably isn’t a major motivation for your cat. Most cats will show distance increasing behaviors first which include things like hissing, swatting, and sometimes even huffing. What aggressive cats don’t do, is run right for a bite.

Hissing and swatting are a cat’s first line of defense and going in for a bite can be very dangerous for a cat in a truly aggressive situation. Consider how exposed a cat has to be to get that close to another animal that they see as a threat.

The exception is situations where dogs are rapidly closing the distance but in those cases, it should be obvious aggression is at play and it’s your job to deescalate and ideally completely prevent a situation like that.

It’s Probably Not About Dominance Either

While dominance can play a part in feline aggression, cats have many other tools for showing dominance that are much most subtle than a bite to a dog’s neck.

Territory is of primary importance to cats and they’re more likely to show dominance by claiming their turf instead of going for a bite to the neck. Cats may growl, hiss or swat when dogs approach certain areas or try to lay in specific parts of the house.

In other words, dominance for cats is more about securing the best spots in the house instead of showing your dog who’s boss by biting their neck.

How To Stop The Behavior?

In most cases, the biting isn’t going to be a problem and the dog may even enjoy the experience. If biting becomes too hard, the dog can always get up and walk away, and giving your dog plenty of places to lay is a good start.

You can also offer your dog some private time in another part of the house or in their crate.

But in cases where dogs are more tolerant of the behavior, it can be a bit more difficult to modify.

Increasing both physical and mental stimulation for your cat is a good start and many causes of the neck biting behavior can be addressed by burning off your cat’s extra energy.

When you first see your cat bite your dog’s neck, it can be a little startling. Just the description of a bite to the neck sounds painful!

But when you realize that most of the explanations are based on play or even a form of affection it doesn’t sound so bad after all!

What do you think? What explanation best explains your cat’s neck biting habit?