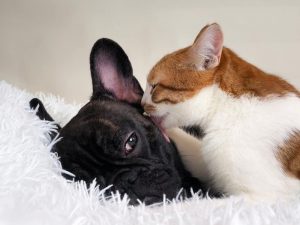 If you’re a cat owner, you’ve probably gotten a front-row seat to one or more of their grooming rituals. Cats are known for their steadfast grooming habits, and it would be no surprise for the average cat owner to see them engaging in a good grooming session multiple times per day.

But did you know that cats also groom other animals, including dogs? The answer as to why they do that might surprise you!

But why would my cat groom my dog?

Cats may lick and groom dogs for social bonding or affection, because the dog smells interesting, or as an act of dominance and establishing the dog as their property. The licking is generally considered safe and helps build a good relationship between your cat and dog.

What's Inside show
Reason 1: Social Grooming
Reason 2: Affection
Reason 3: Establishing Territory
Reason 4: Your Dog Smells Nice!
What Your Cat Licking Your Dog Probably Isn’t…
It’s Probably Not A Mother Instinct
It’s Probably Not Because Your Cat Is Mistaking Your Dog For Another Cat
Why Does My Cat Start Biting My Dog During Grooming?
Why You Should Allow Your Cat to Lick Your Dog
When You Shouldn’t Allow Your Cat to Lick Your Dog
Conclusion

The concept of social grooming (also referred to as allogrooming) extends beyond just cats and dogs, but pet owners who have both kinds of furry friends in their household will most likely see the two engage in social grooming at some point. Cats and dogs, despite being different species, can and do form social bonds with each other. Social grooming is one way in which cats can help establish a relationship with a dog.

When thinking about why your cat might groom your dog, one reason may be that your cat is trying to form a friendship with your dog. If you’ve brought home a new dog, your cat may become curious and start investigating this potential four-legged friend.

Your cat may begin licking or even nibbling at the dog. Cats will often lick the face and ears of a dog, but you can also see them groom other parts of the dog’s body. Some cats may even knead their new canine companion the same way they do you.

Contrary to popular belief, cats are social creatures and they don’t always portray an image of solitary attitude! While they are interested in forming bonds with other animals, they must do it on their terms. Mutual grooming is one way to build trust with a dog that lives in their household. In many cases, the dog may also begin licking and grooming your cat! This mutual grooming establishes an even closer relationship between the two animals.

While there is not enough research to definitively say that cats and dogs understand “love” in the same way a human does, they do understand attachment and affection and can show their love in different ways. Cats who frequently approach dogs and begin licking and grooming the dog while purring, kneading their paws, and showing other relaxed body language could be showing the dog that they are fond of them and interested in interacting with them.

Because cats tend to be very cautious in most of their daily life, being so vulnerable with a dog is a good indicator that the cat feels very comfortable being around the dog. For a cat to loosen up enough that they can spend a casual afternoon grooming a dog is a big sign of trust indeed!

Cats are territorial creatures and can be feisty about what they consider theirs and this includes everything from water bowls to cat trees. Cats will attempt to establish their territory and what they “own” by scratching, spraying, rubbing against, or by licking what they feel belongs to them.

You may notice that when your cat begins licking your dog, he also begins rubbing and nudging his head against the dog periodically. Both licking and rubbing against the dog could be your cat’s attempt to claim ownership over the dog. His licks and rubs say, “this is mine!” to other cats.

While your dog is probably unconcerned about being the cat’s property, other cats who smell your cat on your dog may feel differently and will either respect your cat and leave your pup alone, or they may decide they’d like your dog all to themselves!

One of the more unusual reasons your cat is licking and grooming your dog might be that your cat thinks your dog smells interesting! If your dog recently rolled in something or was around something that smells good (at least to the cat), you may see your cat licking, grooming, and rubbing all over the dog.

Sometimes the dog may just have something on them that the cat wants to taste, but other times your dog’s smell may be so overwhelmingly attractive to the cat that your cat will enter an almost intoxicated state like what you would see if they were exposed to catnip. So, while you may think your dog is a bit stinky and in need of a bath, your cat may absolutely love his smell!

What Your Cat Licking Your Dog Probably Isn’t…

Let’s look at a few options that are probably not behind your cat’s desire to groom and lick the dog.

It’s Probably Not A Mother Instinct

Cats and dogs are very different in how they communicate with each other, and it is unlikely your cat thinks your dog is anything other than a dog.

While cats and dogs can pick up on the behaviors of other species and may emulate them, they do recognize the differences between themselves and other species. Your cat may recognize your dog as a member of their family and household, but they probably do not see your dog as another cat.

Why Does My Cat Start Biting My Dog During Grooming?

You might notice your cat begin to bite your dog during the grooming process and it’s not uncommon for cats to lick then bite humans either. Cats might do this because they are attempting to indicate to the dog that the cat is of a higher social status, or the “dominant” one of the pair.

Cats may also bite if they become overstimulated and biting is their way of getting out excess energy and an indicator that they want to stop the interaction (even if they were the ones to initiate it in the first place).

Usually, the bites are not meant to inflict pain on the dog and will not cause any injury, but owners should separate the two if either pet appears stressed or upset.

Why You Should Allow Your Cat to Lick Your Dog

Grooming and licking allows a cat to communicate to the dog that it feels comfortable and trusts the dog not to hurt it. Allowing your cat to lick and groom your dog helps them build a relationship and communicate with each other. Mutual grooming also allows the cat and dog to sort out their social status to maintain peace and calm within the household.

When You Shouldn’t Allow Your Cat to Lick Your Dog

There are times where it’s best not to let your cat lick your dog. Certain flea and tick products that are used for dogs are toxic to cats if ingested. This includes chemical-based treatments as well as natural treatments (such as Tea Tree Oil). If you use any kind of flea and tick treatment on your dog, it’s probably safest not to allow your cat to groom him.

Depending on what kind of dog you have, cats can also ingest too much fur or hair from your dog and develop hairballs. While most cats can cough up a good-sized hairball no problem, if you are finding that your cat is struggling with an excessive number of hairballs, you might limit how much time your cat spends grooming your dog or provide your cat with a hairball treatment.

While it may seem a bit odd to see your cat licking and grooming your dog, the truth is that it might be a GOOD thing! The way cats interact with dogs is just as unique as the cats themselves. If you catch your cat giving your dog a quick bath, take a moment to appreciate that your cat might be trying to establish a good relationship with your pup.