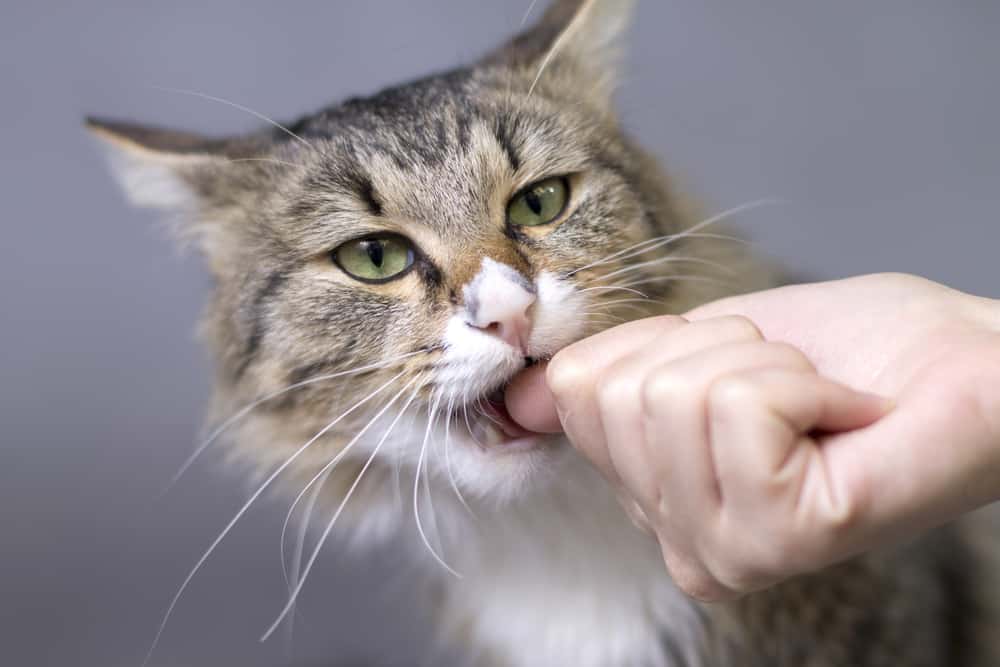 Here’s the scenario: You’re hanging out with Dr. Tuna (that’s your cat’s name obviously) and you’re gently scratching his cheek. Which he LOVES by the way. Then Dr. Tuna decides to start licking your hand ever so slightly.

You think, “Well, his tongue is a bit rough but he seems to be saying thanks for all the petting. I’ll allow it.”

Not a second later, Dr. Tuna is chomping down! Not super hard but it’s not exactly gentle either.

Ever wondered why your cat licks then bites you?

You’re in the right place. I set out to get the answer and do my best to solve this feline mystery! We’re going to dive deep into every possible scenario along with the context clue you need to look for to figure out what explanation makes the most sense.

But if you’re just looking for a quick answer as to why cats lick and bite then here it is:

Cats that lick and bite are most likely showing affection in the form of a love bite. This is especially likely if you’re just relaxing and not actively petting your cat. However, it could also be a sign of an overstimulated cat or just grooming behavior.

What Can We Really Know About Cat Behavior?

First off, it’s important to realize the sad fact that we can’t have a conversation with your cat… or any cat. That means we’re making educated guesses on why cats do certain things and we really need to rely on the context (aka what else was going on) to learn more about the behavior.

That’s why we’re going to lay out three possible reasons why your cat may lick then bite you while giving you plenty of context cues to look for so you can figure out which one makes the most sense.

When it comes to understanding cat behavior, context is extremely important!

Scenario #1: Lick Then Bite Without Any Petting

Here’s what it looks like: You’re sitting on the couch doing your thing and then kitty calmly approaches, licks one or two times, and gives you a little bite. You weren’t petting her at all and your cat seems completely calm and relaxed throughout the licking and biting.

The Biggest Factors To Look For: A happy, calm, relaxed cat that isn’t being pet before the lick and bite.

You May Be Dealing With A Love Bite

In this scenario, your cat is probably sharing a little love bite that’s preceded by a lick.

But what exactly are love bites?

According to Dr. Karen Becker, a little nip is a completely normal way of saying they love you and a common sign of affection but unfortunately “your cat doesn’t understand her love bites aren’t always pleasant for you.”

These kind of cat bites are actually a normal part of how cats (but especially kittens) interact with each other. Dr. Becker goes on to explain that “ kitties nip each other affectionately, and their skin is tougher than ours.” So it’s kind of like kitty kisses! 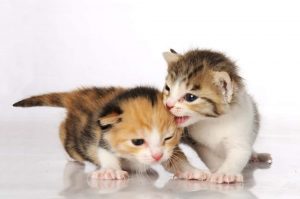 I can confirm firsthand that my cat Debbie is a big fan of love bites.

Unfortunately, her favorite spot to go for is my nose!

I’ll be sitting in bed, reading a book, and winding down for the day. Debbie will stroll up, let out a little chirp, and ever so slowly give my nose a bite.

Not only does it make me a little self-conscious about my nose, but it also doesn’t feel that great. But I’m not sure which of us is weirder…my cat for biting my nose or me for letting it happen more than once!

Or Your Cat Could Be Grooming You

Others argue that the licks and bites that occur outside of petting are part of the grooming process for cats and they’re just giving you a good cleaning.

Well, it’s really not much of cleaning so maybe we should think of it like a not so subtle hint.

So does this grooming theory hold weight?

Cats do occasionally bite during the grooming process. Usually, it happens when they can’t quite get something off their fur or they need to really scratch an itch. If you watch enough cats groom themselves or each other, you’ll eventually see that it’s not unusual for them to mix in a little nibble.

I’ve actually got a story for this one, too. I had a foster cat named Stormy that made it her mission to lick my wet hair after a shower. This always started as licks but then eventually ended in a bite or two.

That being said, I’m starting to get worried about what this article is saying about me.

But back to the grooming explanation for the lick/bite combo…

I believe the cat love bites are more likely unless your cat is obviously trying to groom you. If your cat licks you more than a few times then it’s possible she’s trying to give you a grooming but if it’s just one lick followed by a bite it’s probably a love bite.

Scenario #2: Your Cat Is Happy But Overstimulated

Here’s what it looks like: You’re giving your cat a good petting. Maybe you’re petting her quickly or just focusing on one spot a little too long. Or maybe you like to live dangerously and you’ve gone for a belly rub. Either way, she leans in, gives your finger a lick or two, and then a nice chomp!

The Biggest Factors To Look For: What kind of body language are you seeing from your cat? Does she look loose and comfortable?

Your cat may be experiencing something called overstimulation or sometimes called petting-induced aggression. Overstimulation occurs when the pets you’re giving your cat go from pleasant and enjoyable to suddenly uncomfortable or frustrating.

Why do cats get overstimulated?

While we can’t give a completely scientific explanation we know that cats are sensitive creatures with a clear threshold for when affection isn’t anymore.

I try to think of it like being ticklish. Sometimes someone could massage or rub your back and it might feel nice. But then they hit just the right spot near your ribs and suddenly you’re being tickled!

I know it’s a bit of a stretch (and anthropomorphizing animals isn’t a great habit to get in to) but I do think it’s still a useful way to think about overstimulation in cats. And I think it’s a better explanation than simply saying that your cat has mood swings!

The biggest problem is that our cats can’t let us know with words that something has become uncomfortable. Eventually, they get frustrated and communicate the only way they can think of…with a little cat bite!

So what can you do about overstimulated cats that go from happy and purring to licking and biting?

It’s important to note here that your cat will typically look loose and comfortable before overstimulation occurs but may show more stressful body language before the licking and biting occurs.

Always be observant of your cat’s behavior. If your cat already looks tense, stressed or fearful then don’t pet!

Try to pay attention to what your cat does after the lick and bite combination. If your cat creates distance by running away or hiding under something there’s a good chance they got overstimulated and they’re looking for some space. Make sure to give your cat the room they need and consider what happened right before she became overstimulated.

Eventually, you’ll be able to get a feel for the amount of petting your cat can handle and what they can’t.

Scenario #3: Your Cat Is Playing With You!

Here’s what it looks like: The tricky part is that playtime can look a lot like overstimulation! You’re petting your cat and then suddenly your cat licks then bites you! The big question is what does your cat do next?

The Biggest Factors To Look For: Does your cat take any kind of play postures after the first lick and bite combo or immediately start going after toys? If so, she’s probably just trying to play with you! If instead, your cat tries to run and create space you might be dealing with scenario #2.

How Your Cat Asks To Play

Instead, they have to find a way to let you know when she wants to play.

While grabbing or toy would seem like a perfectly clear signal some of our cats might prefer to be a little more forward and let the chomping do the talking.

So how can you tell if the licking and biting combo is actually a request to play?

You’ll want to pay close attention to what your cat does immediately after!

If she stays and still seems interested or sprints little circles around the house, she’s probably ready to play. But if she looks tense or hides it probably scenario number two and she’s ready for a break. 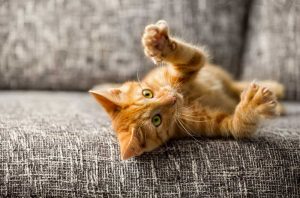 This kitten is ready to play!

I hope these scenarios helped clear up the great feline licking and biting mystery! But if you’re still left with more questions I’m here to help. I’ve put together some of the most common questions I’ve gotten about cats that lick and bite.

Q: Why does my cat bite me gently?

Gentle biting is a way for your cat to communicate. Most of the time it’s a “love bite” which is one of the many ways your cat may show affection. But it could also be your cat’s way of saying they’ve had enough petting. You need to pay close attention to your cat’s body language to figure out what your cat is trying to say.

Q: Why does my cat lick my other cat and then bite?

It could be because they’re grooming the other cat, they want to play or they’re feeling frustrated and overstimulated. Check out your cat’s body language which will help you understand exactly what’s going on. There’s a good chance your other cat knows exactly what the cat bites mean!

Q: Why does my cat lick then bite me but not my partner?

Somebody is the favorite! Your cat may be licking and biting you as part of a “love bite”, they may be asking you to stop petting them after they’ve had enough or they just want to play! Pay close attention to your cat’s body language and what they do after the bite.

Have you gotten the lick then bite combo from your cats? What scenario do you think it is?

I’d love to hear and hope you have some stories as weird as mine!