Skip to Content
Written by Logan Michael in Cat Behavior last updated January 2022
BetterWithCats.net may earn a small commission when you use one of the links on this page to purchase. 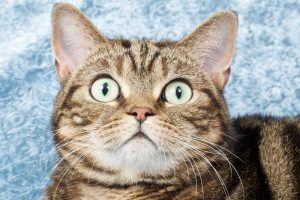 While I hope you never have to see a cat that’s so scared or stressed that they poop, it does happen. It’s not just cats that this happens to either, it’s a common response in fight or flight situations across many animals including us humans.

Why do cats poop and pee when scared? During times of extreme stress, a long list of physiological changes occur to optimize for fight or flight including the tightening of stomach muscles and relaxation of bowel control which can lead to cats getting so scared that they pee or poop.

While this isn’t the most glamorous subject, let’s look a little closer at why the feline fight or flight response might find it best to poop when scared or stressed.

What's Inside show
Looking At Other Species
Reason 1: Focusing On What’s Most Important
Reason 2: A Deterrent For Predators
Reason 3: Your Cat’s Stinky Glands
Do Cats Pee When Scared?
Why Do Cats Poop When Fighting?
How To Calm A Scared Cat
Move Slowly and Carefully
Show Your Cat A Safe Exit
Don’t Rush, Don’t Punish
When To Consult Your Veterinarian
Closing Thoughts

Looking At Other Species

As we explain why cats poop when scared in the rest of this article, we’ll need to look at other species (including humans) for some understanding. While comparing rats and humans to cats isn’t perfect, I’m happy to say that I couldn’t find a study where cats were intentionally scared to the point that they defecate, and there’s still a lot that can be learned from these comparisons.

I can’t imagine the true terror of living through World War II so that definitely counts as a high-fear situation. It also goes to show that this complex physiological response doesn’t always make sense. The rational human mind, even in the midst of war, likely realizes that pooping isn’t going to change anything. Especially when bullets are involved.

But the fact that it still happens highlights just how primal this response seems to be. Again, while I’m not saying cats and humans are the same, many fundamental responses, like the fight or flight response, look very similar across many species.

With that in mind, let’s take a closer look at each of the possible reasons why cats poop when scared.

Reason 1: Focusing On What’s Most Important

The idea of “focusing on what’s important” is putting it nicely but according to combat expert Geoff Thompson, “Digested food and drink is also seen as non-vital to fight or flight so [it] will be discarded.” The idea here is that a scared cat is removing any waste from their body since it won’t help in the coming fighting or fleeing situation.

While that might not seem like it could make much of a difference, in a true life or death situation, whether real or perceived, the body is going to take every possible precaution to get an edge.

Some even argue that removing waste in the form of poop or urine could give cats a slight weight or speed advantage. One study found that every pound of body weight in humans correlated to an extra 1.4 seconds per mile.

Again, that’s imperfect data from the human world but it still highlights the relationship between speed and weight and in the toughest situation every second, or millisecond, can matter.

Reason 2: A Deterrent For Predators

Many animals (especially prey animals) will defecate if they feel threatened by a predator. While this may just be an extension of the flight or fight response it could also be a way to deter the predator from pursuing them further. After all, that predator was probably looking for a tasty meal and the smell of an animal covered in their own poop might not be worth the trouble.

Remember, your cat is both predator and prey.

This idea is kinda like the defensive tactics of the skunk but on a much smaller scale. The skunk’s strategy is basically to gross you out (not the scientific term) and make any would-be predators think twice about turning the foul-smelling furry friend into dinner. Defecating and urinated during moments of extreme fear and stress could have a similar impact.

And I can assure you, you’ll know it when you smell it as it’s a uniquely terrible smell.

This smell may just add to the overall deterrent strategy.

Do Cats Pee When Scared?

Many cats will also pee when they’re scared and this is related to the same physiological fight or flight response that leads them to defecate.

Why Do Cats Poop When Fighting?

Just like cats will poop when scared, they may also poop in the middle of a fight with another cat or another animal.

This doesn’t mean that a cat is scared and instead it’s simply the “fight” side of the fight or flight response. Removing extra waste may deter the other animal from wanting to continue the fight but it’s also just the body’s way of getting rid of anything that’s not essential for the fight.

How To Calm A Scared Cat

Again, I hope you don’t have to encounter a cat that’s so scared they defecate. But if you do, one of the most important things you can do to calm them down is give them space. And as much as possible, allow them to act on their own terms.

For example, if your cat is hiding because a strange dog entered the home just let them keep hiding as long as their safe.

Here are a few other things to consider:

If a cat is scared enough to poop, they’ll also have dozens of other physiological responses including dilated pupils and an intense focus on everything around them. You’ll want to give your cat plenty of space but you also don’t want to run out of the room- that will likely make things worse.

Instead, take your time and take slow exaggerated movements. In the animal world, quick movements are more often a sign of aggression than friendliness so try to set your cat at ease by moving slow.

Show Your Cat A Safe Exit

If you pay close attention to a scared cat or almost any scared animal, you’ll notice that they’re often looking for any potential exit. This could be an open door or their favorite cat tree but it’s important to make sure a scared cat is able to identify an exit.

For some folks, there will be a very strong temptation to push the issue and show your cat that there’s nothing to be afraid of and certainly no reason to poop! But that is very rarely a good idea. Not only could that end with you getting scratched or even bitten but it typically makes the fear problem worse for your cat.

If you do want to try and coax your cat out faster, focus on positive reinforcement using treats and lots of patience. If your cat is food motivated, they may eventually decide that reaching that bowl of tuna water or other yummy treat is worth the risk.

When To Consult Your Veterinarian

If there’s a very clear cause for your cat’s fear, and the subsequent poop, then there typically isn’t anything to worry about. Of course, you’ll want to make sure that your cat isn’t put in that situation again but we’ve already established that pooping when scared can be a part of the normal fight or flight response for cats. So in some situations, this behavior makes sense.

But if your cat is regularly having episodes where they defecate as a fear response then there’s likely a bigger problem at play.

There’s either a physical health concern that’s causing fecal incontinence or there may be a mental issue that’s causing your cat to have a heightened and prolonged fear response. Either way, your veterinarian can help you understand what’s going on and how to address it.

However, if you’re ever unsure or worried, it’s always a good idea to talk to your veterinarian.

While at first it might seem like a cat-only phenomenon, releasing bowls is a normal part of the fight or flight response for many animals…including humans.

Different cats will have different thresholds for when they reach the point of defecating but if you do an encounter a cat that responds to fear in this way it’s important to give them space. In most cases, whatever caused this level of fear will be a one-time or at least unusual event. That could be a strange animal entering the home, a powerful storm, or a fight with another cat.

The pooping response isn’t only limited to being scared but is really a part of the fight or flight response. That means a fight with another cat or a terrifying sound could trigger the same response.

But if your cat is regularly brought to pooping as a fear response then there could be a much bigger problem at play and it’s time to consult your veterinarian.