Skip to Content
Written by Logan M. in Behavior last updated November 2020
BetterWithCats.net may earn a small commission when you use one of the links on this page to purchase. 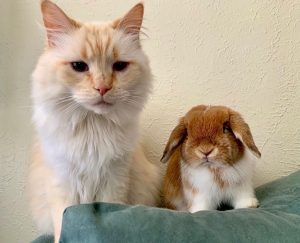 It’s easy to forget that our cute cuddly cats are actually prolific predators with a deep drive to hunt. And while this drive can be very cute when it’s directed to the latest toy or a shoelace, if we’re trying to create a big furry interspecies pet family it can cause real problems!

We all know that cats will readily hunt mice and rats but what other small animals like rabbits?

So, do cats eat and hunt rabbits? Yes, cats have been known to hunt and eat rabbits but that doesn’t mean they can’t get along in the same household with the proper introductions. Still, if your cat sees a wild rabbit outside the home there’s a good chance they’ll try to hunt it.

It’s all about context and there’s a lot of variables to consider. There are also big differences between hunting rabbits and actually eating them so let’s dive a little deeper to try and understand what motivates our carnivorous kitties.

Your Cat Is A Carnivore

Cats are carnivores. But not just any carnivore, cats are what’s called obligate carnivores which means they need meat in order to get all their required nutrients. That means animal-based meats aren’t just an important part of your cat’s diet, they’re absolutely necessary.

For that reason, you can find several types of animal proteins in cat food including rabbit. One of the most popular cat foods that feature rabbit as a prominent ingredient is Merrick’s Backcountry cat food and if you’re interested you can read my full review here.

Okay, so we know that cats can eat rabbits in cat food but what about the hunting part of things? What makes cats want to chase, pursue, and even eat rabbits?

All carnivores have a prey drive which is their instinctual urge to find, pursue, and capture prey. You’ve seen this hundreds of times firsthand when your cat attacks a piece of string, bites your hair, or chases down anything that dangles. It’s usually the movement of whatever it is they’re chasing that gets them going!

When it comes to rabbits, if a rabbit just walks up casually to a cat there’s a good chance your cat’s prey drive won’t kick in. For example, check out this picture of little Pylon the orange rabbit meeting Ari the cat. Pylon the rabbit is confident and calm and Ari doesn’t have a particularly high prey drive. As a result, these two are good friends! Remember, it’s all about context!

While cats are much more well known for hunting small rodents and birds they’ll readily hunt rabbits as well. Studies of feral cats have found that felines will eat “the most numerous prey species in that area for that time of year.” Which means if there are more rabbits then anything else then cats will be hunting rabbit. It’s important to point out that the study reviewed feral cats which are the unsocialized version of your domestic cat. So there’s no reason to assume that your happy house cat won’t be hunting rabbits if they visit the great outdoors.

Another study equipped house cats with tiny cameras to learn more about what they do when they’re out and about. One of the most interesting findings was that cats were happy to hunt even when they were well fed and that 70% of the time they didn’t eat what they actually killed.

While that might make our cats seem like little maniacs it’s this desire to hunt that, even when they’re not hungry, that has made cats such effective mousers over the years!

Is It Safe For Cats To Eat Wild Rabbits?

With all this information about cats hunting and eating rabbit, it might seem like it’s okay to let it happen, right?

Probably not. That’s because there’s a rare but possibly fatal disease called tularemia that can be transmitted from rabbits to cats. According to VCA Veterinary Hospitals, tularemia creates “tumor-like masses and abscesses in the victim animal’s liver” and is most commonly transmitted when a cat eats infected organs.

Even worse, tularemia can be deadly in cats and VCA Hospitals goes on to say that “tularemia can be treated, but it requires aggressive treatment including hospitalization with good supportive care (e.g., intravenous fluid therapy and antibiotics). The key to successful treatment is EARLY intervention. Even with early diagnosis and treatment, the death rate among cats with tularemia is high.”

As if that wasn’t bad enough…tularemia is also zoonotic which means it can be transmitted from animals to humans. Tularemia is rare but it’s a very real public health concern and a good reason to not let your cat hunt and eat wild rabbits.

The first signs of tularemia in cats are swollen, painful lymph notes in the head and neck along with fever. Unforntuely, there are several conditions that show the same early symptoms so if your cat has been eating rabbits (or you suspect they may have) it’s best to consult your veterinarian for the next steps.

Do Domestic Rabbits and Cats Get Along?

While cats might have an instinctual urge to hunt wild rabbits a lot can change inside the home when it comes to domestic cats and rabbits.

So do cats and rabbits get along? They absolutely can with the right introductions but it will also depend on the individual animals. Rabbits that are frightened and quick to run away might trigger your cat’s prey drive and it’s important to watch for this.

As the House Rabbit Society points out, “A cat who lives with a house rabbit might still stalk and chase a rabbit he met outdoors. The environmental cues would set the instinct in motion. In fact, he might even pursue his own rabbit-friend if they encountered each other outdoors.” This is critical to understand and highlights just how important context is in the feline/rabbit relationship!

It also means that for the most part, cats won’t attack rabbits unless something triggers their prey drive. But that doesn’t mean you should let your guard down. A cat’s prey drive is a powerful thing and a few moments could leave both parties injured.

How To Introduce Rabbits and Cats (Without Anyone Getting Eaten)

One of the most important things to remember is that you want your rabbit and cat to meet as furry roommates and not predator and prey. That means making sure your rabbit doesn’t sprint off and trigger your cat’s instinct to hunt.

One of the safest ways to start the introduction is while your rabbit is safe within a hutch or cage. That way the two furry future friends can get used to each other without any real danger between them. Over time, you can let them meet each other, ideally on neutral territory within the home, without any barriers between them. Don’t rush things and take your time.

Your rabbit and cat will find a way to create their own social structure that works for them and hopefully create a happy and harmonious home!

Cats and rabbits have a complicated and somewhat confusing relationship! While your cat might be eating rabbit in their cat food that doesn’t mean they can’t snuggle up to a bunny friend a few minutes later.

So while cats do eat rabbits in many contexts, domestic cats and rabbits can get along as long as they see each other in the right light. It can also make for some adorable photos like the ones in this article of Ari and Pylon!