Skip to content
Written by Logan Michael in Behavior last updated May 2022
BetterWithCats.net may earn a small commission when you use one of the links on this page to purchase. 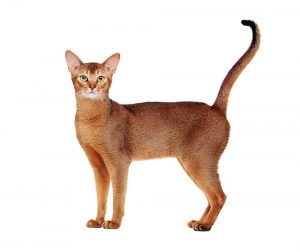 Cats have a long list of ways that they can communicate with us and even though we usually think of their meows or other sounds when it comes to communication, their tail can tell us a lot as well. From the upright question mark tail of a happy cat to the twitching and puffy tail of an irritated feline there’s a lot we can learn about cats by looking at their tail.

But what about when cats use their tail to give you a little slap or a bop? What does that mean?

Most of the time, a tail slap is either a way for cats to mark their territory or you just happen to be in the way. In other cases, it could be a sign that cats are overstimulated or cats could even just enjoy the feeling of bopping you with their tail.

Let’s take a closer look at each reason along with some tips so you can figure out which explanation makes the most sense for your cat.

What's Inside show
Let’s Clarify What We Mean By “Slap”
4 Reasons Cats Hit Humans With Their Tail
Reason 1: Your Cat Could Be Claiming Their Territory
Reason 2: You’re In The Way
Reason 3: Your Cat Could Be Overstimulated
Reason 4: It’s Fun
Closing Thoughts

Let’s Clarify What We Mean By “Slap”

When we talk about cats slapping humans with their tails we don’t really mean that they hit you with any kind of serious force. Of course, cats can control thier tail enough to hit you with it, but even with 6 distinct muscles in their tails, they still can’t move their tail fast enough to really hurt anyone.

We’ll talk about cats that slap, hit or bop people with their tail but we’re really talking about something that looks like this:

Now that we’re on the same page with what we’re talking about, let’s get into the reasons!

Reason 1: Your Cat Could Be Claiming Their Territory

For your cat, territory is extremely important and much of their day is spent spreading their scent to let the world know what belongs to them. But don’t get confused, we’re not talking about urine marking but instead using the scent glands that they have in their cheeks, paws, and even tail to claim their turf.

Not only can this kind of scent marking explain behaviors like headbutting and scratching but it can also explain the tail slap!

As far as your cat is concerned, you’re another part of their territory, and rubbing their tail on you is a good way to let the world know. In many cases, what starts as a headbutt turns into a full body rub that ends with a little slap of the tail. This technique is not only likely to feel nice to your cat (as they’re essentially petting themselves) but it’s also an efficient way to get their scent on you by using multiple scent glands.

However, because the scent glands on the head are generally more important, it’s fair to say that the tail slap is probably more of an afterthought than anything else. Still, some cats are just really enthusiastic about how they headbutt and they seem to put more energy into using their tail as part of the process.

But it’s still all a part of claiming territory.

If most of your cat’s tail slaps start with a headbutt or check rub, then it’s quite likely that claiming territory is the main motivation.

Reason 2: You’re In The Way

Take a second look at the video above and think about what that cat is really focused on.

He’s much more interested in what’s happening outside than anything that his human friend is doing. In this case, those tail slaps aren’t about the human at all.

Instead, that focused feline is moving his tail in the same way that any determined cat does with slow and steady movements back and forth. Those tail movements are similar to the way that humans furrow their brows or clench their teeth while they’re deep in concentration.

That means that the human just happens to be in the way of a tail that’s ready to slap.

To figure out if this explanation applies to you and your cat, pay close attention to what your cat is doing while they slap you with their tail. If they’re chattering at birds out the window or stalking their feline roommate for fun, there’s a good chance those tail slaps are just collateral damage.

Reason 3: Your Cat Could Be Overstimulated

In other cases, those tail slaps could be much more intentional and a swishing tail could be a sign of overstimulation in cats. When it comes to feline behavior, overstimulation refers to petting that stresses cats out instead of giving them enjoyment. The threshold for when this occurs is different for each cat but once you learn the signs it’s usually easy to spot before it becomes a problem.

And one of the most obvious signs is a twitching or swishing tail. Once again, those slaps may not be meant directly for you but they still send a strong message that your cat has a had enough petting.

As a student of feline behavior, I’ve read dozens of studies and watched hundreds of videos that all attempt to explain the complexities of cat behavior. I’ve also written hundreds of articles that detail the instincts motivating our feline friends.

But sometimes, cats just do something because it’s fun.

Whether it’s licking then biting your finger or bopping you in the face with their tail, cats don’t always need any big reason besides entertainment to do many of the things they do.

Now, I don’t think cats are specifically enjoying that idea of hitting you with their tail (whether that’s in your face or on the legs) but they probably do enjoy the feeling of slapping just about anything their tail.

Sometimes a slap from your cat’s tail can feel personal, but in most cases, it’s just your feline’s way of marking their turf.

In other cases, you just might be an innocent bystander to a tail slap.

But what do you think? Which explanation best explains your cat’s tail slapping habit?

link to Why Are My Cats Ears Hot? Find Out 6 Reasons For It

Why are my cats ears hot? This question probably occurred when you snuggled with your favorite feline and noticed her ears were hot. We’ve often heard cats hide when they have health issues or are...

If you’re looking for a Maine Coon growth chart, you probably have a Maine Coon kitten that you need to take care of. Don’t worry; we got you. We prepared everything you need to know about your...