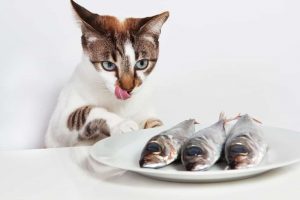 Cats are constantly represented in cartoons and movies as being downright fish crazy. Not to mention almost every brand of cat food has a fish flavor available. And cats certainly don’t seem to complain about all the fish!

After all, fish are in the water and I’m not sure if you’ve ever tried to give your cat a bath…but no amount of fish would have made my cat happy at that moment.

So how did cats develop a taste for fish without ever actually fishing?

While no one can know the answer with complete certainty, we believe that it all started with the ancient Egyptians…

But before we get to that, let’s talk about your feline’s ancient ancestors.

The Origins Of The (Not So) Common Housecat

All modern house cats share a common ancestor in the African Wildcat. These wild ancestors are still around today and can be found throughout the African plains.

But I can tell you one thing they aren’t doing…they’re not fishing!

Instead, these wildcats prey on rats, mice, gerbils, and hares.

You know, the usual cat stuff.

But that all started to change more than 10,000 years ago when it’s believed that Egyptians first began to domesticate the wildcat. While scientists used to believe that this started around 5,000 years ago, recent skeletal evidence gave way to the new 10,000-year timeline.

How Did Egyptians Domesticate The Cat?

What’s the best way to get to an animal’s heart?

And we have reason to believe that the ancient Egyptians first began to befriend your cat’s ancient ancestors with fish! 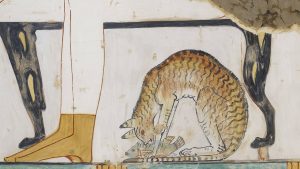 That’s a happy kitty below the dinner table chowing down on the original meow mix. AKA an entire raw fish.

You’ve probably heard of natural selection from Darwin. You know, the process by which the fittest individuals of a particular species survive and reproduce.

Normally, this is described in terms of natural adaptations to nature and the environment. But there’s another factor that can rapidly cause a species to evolve and change.

It’s called artificial selection and it describes the process by which mankind specifically selects certain traits within a species.

For an extreme example, you don’t have to look further than your household dog. I can tell you with 100% confidence that the modern English Bulldog certainly did NOT come about from natural selection.

So what does this have to do with your cat liking fish?

If the Egyptians primarily used fish to turn the African wildcat from fearful to friendly then they also unwittingly promoted a new species of cat that liked fish.

Remember, in every population, there are always variations. Just like some people love spicy food and others don’t there would be wildcats that really loved fish and many that didn’t. Not because they had eaten them before or knew how to fish. It’s just genetic variation that made these cats feel like fish was a good deal.

And it’s the wildcats that loved fish that would have become domesticated.

We can also guess (based on the artwork of the time) that fish was the major meal they gave their cats. So if you’re an ancient wildcat and you don’t like fish, you probably wouldn’t stay around too long.

These fish-loving felines bred and over thousands of years that particular trait was perpetuated in the population.

Protein is extremely important to cats. In fact, your cat is what’s called an obligate carnivore which describes animals that can’t obtain all the nutrients they need from plants alone. They need animal protein in order to stay healthy. In other words, there’s no such thing as a vegan cat.

This may be another reason why cats like fish. Their instincts drive them to find animal sources of protein and your cat is well aware that fish is full of protein.

Cats also taste things differently than humans and most other mammals. For one, they can’t actually taste sweets. So for our protein-focused felines fish might just be the equivalent of a candy bar!

What About Other Cats? Do They Fish?

While there’s strong evidence that your cat evolved from the African Wildcat there are other cats that fish such as the aptly named fishing cat of southeast Asia.

These cats spend a lot of time near the lakes, marshes, rivers, and wetlands where they’re known to scoop up fish. from the shore. They’ll occasionally even swim underwater to get the fish!

So even though the domestic housecat is more closely related to the African wildcat, they still have a fishing cat in the family tree!

While we can’t know for sure our best guess is that as obligate carnivores, your cat loves (and needs) meat, and there are few other types of meat that smell as strongly as fish! So while we may be a little grossed out by the fishy smell your carnivorous cat can’t resist!

Fish is also very nutrient-dense and relatively rare for cats to get. This only makes it even more appealing to your cat!

Is Fish Good For My Cat?

Like many dietary choices, it depends. But fish is a great source of protein for your cat full and it’s also full of taurine and other amino acids that are essential for your cat. Fish is also an excellent source of high-quality omega 3 fatty acids. So not only is fish a great source of nutrition for cat, but they also love it!

The feline food market is full of fish-flavored products so your cat has a lot to choose from. And we aren’t just talking tuna here, there are dozens of products featuring everything from trout to arctic char!

While we can’t say with certainty why cats like tuna so much, it’s safe to say that tuna is probably the richest and most flavorful food your cat gets. While commercial cat food is great for your cat it doesn’t provide the pure protein fix that your cat gets from a canned tuna. Additionally, in most cases, tuna is a rare treat that your cat knows isn’t always available.

In fact, tuna should never be your cat’s main food. Mercury poisoning in cats is a very real concern, especially when you consider how small your cat is compared to the proportion of tuna they can happily eat!

Barring mercury poison, which shouldn’t be a problem with tuna in small amounts, fish can be a great treat and a wonderful source of healthy omega-3 fatty acids!

We don’t recommend feeding your cat live fish. Not only is this a bit inhumane for the fish, but raw fish can contain pathogens that would be removed when cooked. Depending on the size of the fish, the bones could also cause major damage to your cat’s health.

What Do You Think?

I hope you got some insight into why exactly your cat likes fish. Or probably more accurately, why your cat LOVES fish (but hates water).

We’d love to hear what you think!

Did you learn anything new?

Does your cat love fish or not so much?