Skip to Content
Written by Samantha Davis in General Info last updated February 2022
BetterWithCats.net may earn a small commission when you use one of the links on this page to purchase. 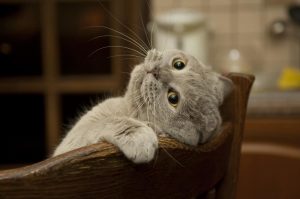 Did you know that scientific literature has identified up to 21 different vocalizations that a cat can make? Cats use their wide vocal range to express how they’re feeling and even to describe things around them.

Domesticated cats (that’s your furry friend!) even adapt their vocal sounds over time to communicate with their humans. Pretty cool, right?

Cats meow, but they also chatter, squeak, pant, trill, chirp and huff. For now, we’re going to look at the huffing sound.

So, why do cats huff?

Cats huff for several reasons, most commonly to communicate a mood like frustration. It can happen while playing or if they see something beyond their reach. They may also make a huffing sound when they sigh from being content, when they are tired, and in rare cases, as the result of a medical condition.

Below, we’ll take a closer look at the reasons why your cat might huff. Before we do that, though, let’s talk about what exactly huffing is.

What is Cat Huffing?

The huffing sound is made by your cat exhaling quickly through their nose. It might sound like your cat is trying to blow their nose or clear their throat, or it just might sound like a short, forced burst of air. Your cat’s mouth will be closed when they huff. They might make a huffing sound once or twice, or they can do it several times in a row.

Most of the time, this is the way cats express their frustration. In the video below, the cat can be heard huffing when it spots another cat outside the window.

Huffing is a different sound than wheezing or panting. As you learn the difference between these sounds your cat makes, you’ll be able to understand your feline companion a little better.

The most common reason that a cat huffs is out of frustration. They aren’t necessarily angry or upset, but there’s something that your kitty isn’t pleased with.

Cats might huff out of frustration because the toy they were playing with rolled under the sofa or there’s a bird outside they can’t chase. Your cat might even huff because you were playing with them and stopped or because they aren’t happy with the position you’re laying in. It doesn’t take a lot for a cat to get huffy and start huffing at you and any cat owner will tell you how particular they are!

Of course, cats huff when they are irritated with us, too! If you tripped over your kitty or stepped on their tail, there’s a good chance they will huff at you. Don’t worry though, cat’s don’t hold a grudge for that long. They prefer to live in the moment, so all will be forgiven a few hours from now!

Reason 2: They Want Something

Cats can easily be compared to toddlers in the sense that they want what they want on their schedule. Whether it’s a want or need, they get huffy when things don’t go their way.

Unlike toddlers, cats don’t have the hands and thumbs to help themselves to what they want. They can’t reach under the couch when their toy rolls out of the way or open the door to let themselves outside (at least most cats can’t open doors).

Instead, they communicate their needs by huffing.

Don’t feel bad if you can’t drop everything on a whim and give in to your kitty’s every demand. As long as they have food, water, and a clean place to go to the bathroom, they’ll be okay if you put off petting them or playing with them until later in the day. They might get a little huffy, but they’ll be loving on you again before too long and you might just need to give them a quick apology to make up for it.

Reason 3: Your Cat is Relaxed

On the opposite end of things, cats sometimes huff to express content and relaxation. It’s not uncommon for them to curl up in a warm, sunny spot or on your lap and let out a little huff. Usually, this just means that they are satisfied in the present moment.

A huff of satisfaction might even sound a little like a sigh. Unlike sighing in humans which usually indicates tiredness or sadness, cats sigh when they are content. They are actually more likely to withdraw if they are sad, probably because they are socially intelligent creatures.

Cats also huff when they are tired from exerting themselves. This might come after they are done running around outside and they curl up in your lap, or right after you’ve finished playing with them.

It is very normal for cats to huff when they are tired and as long as their breathing pattern returns to normal shortly after exertion. If your cat seems to have trouble getting their breaths back to normal, however, obesity or feline asthma might be making it harder for your kitty to breathe. This might sound like a panting or wheezing instead, which we’ll get to next.

While panting or wheezing can sound similar to huffing, cats pant and wheeze for different reasons. A cat is most likely to pant after being active. For example, they might run up the stairs and lay down, then huff. Cats that are overweight are also likely to pant a lot during and after playing.

Wheezing is very similar to panting, but it’s an action done with the mouth closed. Wheezing is usually caused by feline asthma or respiratory illness, so it’s something best managed by a veterinarian. They can prescribe medicine if your cat is sick, or advise you on steps to take to reduce irritants if you have a cat with feline asthma. But as a general rule, things like incense and air fresheners aren’t great for cats even without feline asthma.

You’ll be able to tell if your cat is wheezing by listening to the sound. In addition to the short exhale that sounds like huffing, wheezing is usually accompanied by a whistling or squeaking sound. Wheezing in a cat sounds a lot like wheezing in humans.

Cat Huffing vs. Other Cat Sounds

Huffing is just one of very many different types of cat vocalizations that your kitty uses to communicate with you. The key to deciphering what your cat wants is in understanding what these different vocalizations are, as well as what each of them means for your feline companion.

While it’s helpful to have somewhere to start, it’s important to remember that every cat is different. Scientific studies show that cats adjust their vocalizations based on the reaction of their humans. They are very socially intelligent creatures. This makes it important to pay attention to your cat’s social cues, too. Noticing what they are doing before, during, and after huffing can give you clues about what exactly your feline friend is trying to communicate.

It Probably Isn’t a Social Reaction

In the wild, big cats perform a vocalization called chuffing. Chuffing, which is also referred to as Prusten, is something that has been identified in jaguars, tigers, and some kinds of leopards. It is a series of short, high-intensity exhales that sounds similar to a huff that a house cat might make.

Chuffing is usually observed in social situations or other interactions between big cats. It may be used as a greeting or as part of mating. In these situations, it’s common for cats to do a headbob, too. Chuffing has also been observed by mothers trying to soothe their cubs.

Even though chuffing and huffing sound similar, the meaning behind them is very different. Chuffing is more similar to purring than huffing, since huffing is something often done out of frustration. It isn’t a social greeting like it is in the wild.

Your Cat Probably Isn’t Angry About Something That Happened Yesterday

Chances are, your cat also isn’t huffing because they are holding a grudge. It can definitely seem like they are mad at you if you’re a few minutes late with breakfast or if you step on their tail. However, their initial frustration won’t last too long! Chances are your cat will be back to loving you as soon as you sit down in their favorite spot to curl up in your lap.

Cats are smart creatures. Even though they can be trained to remember some things and are smart enough to recognize humans and animals they know, cats prefer to live in the here and now. This is good news, since it doesn’t always take a lot to get them frustrated!

Why Understanding Your Cat’s Sounds Matters

Even though cats cannot speak English like people do, cats do communicate their emotions. They even recognize and understand the emotions of their owners! This is the reason your cat might love on you a little extra on those days you aren’t feeling your best.

Since there is no one-size-fits-all guide when it comes to cat communication, understanding your cat is important for meeting their needs. It helps you know when they are upset, frustrated, tired, or even content.

The key to deciphering cat language is taking in clues from everything else going on around your cat. If they are frustrated because there is something out of their reach, then they will be staring at that item or actively reaching for it. If they run up on your lap and lay down before huffing, it’s a sign of contentedness and relaxation.

When to Be Concerned About Cat Huffing

In the case of normal cat huffing, there’s not really any reason to be concerned. Your cat is just trying to express their emotions.

One thing to pay attention to is what your cat is doing before, during, and after huffing. This gives you some hint as to the reason and meaning behind their huffing. For example, they might be exhausted if they’ve just finished playing or running around, or your cat might be content when they curl up in your lap.

If their huffing sounds last longer, then it may be a sign that they are panting or wheezing rather than just huffing. Some other signs that your cat is in distress is huffing accompanied by other sounds, like a rattling sound or a high-pitched whistling.

A wheezing cat should be closely monitored, especially if your cat hasn’t had feline asthma or other breathing problems in the past. Wheezing that is persistent or get worse might require emergency attention, especially if something is stopping your cat from breathing.

Cats that only wheeze intermittently should still be scheduled for a vet visit, especially if it becomes a regular occurrence. They can help you determine if an irritant like dust or smoke is to blame or if your cat is struggling with a respiratory infection. Your vet will also help you come up with a plan of treatment.

Huffing is just one of the many ways that your cat will communicate with you. In most cases, it’s not a cause for concern. Your kitty is just trying to share his or her emotions with you. They may be frustrated or tired. In some cases, cats even huff because they are content.

Huffing is usually something you don’t have to worry about. It’s just your cat trying to express themselves. If it’s accompanied by sounds of wheezing, however, it may indicate an underlying issue or health problem that needs to be addressed by a veterinarian.

Hopefully, this article has helped you understand a little bit more about why cats huff and the reason that they may communicate in this way. You might find yourself a little bit closer to understanding your feline companion now!

Are there any specific times that your cat huffs at you? Feel free to leave a comment or some feedback below.