Every cat owner probably asked: why do cats scream when mating, and it is logical that you want to know everything about your feline friend. Before we get in-depth about their scream and mating, let’s learn some things about cats and their sexual maturity.

While males reach sexual maturity between 9 and 12 months, females reach it around 5 to 9 months of age. You can recognize that cats are in heat by watching the signs like meowing, raising their tail, licking, and so on.

The heat duration is 5 to 7 days every month; however, this depends on many factors: if your cat has mated, the cat breed, and the time of the year. If you have a cat that is in the heat, but you don’t want kittens, learn how to help her during this time.

We know that cats start to meow when they’re ready to mate, giving the sign for males to come. That’s why you can hear your indoor cat meowing in another room. This way, cats want to attract males’ attention. But why do cats scream when mating, and why are their meows so audible during copulation?

Stick with this article to discover why and much more about cat mating and courtship!

Why Do Cats Scream When Mating? 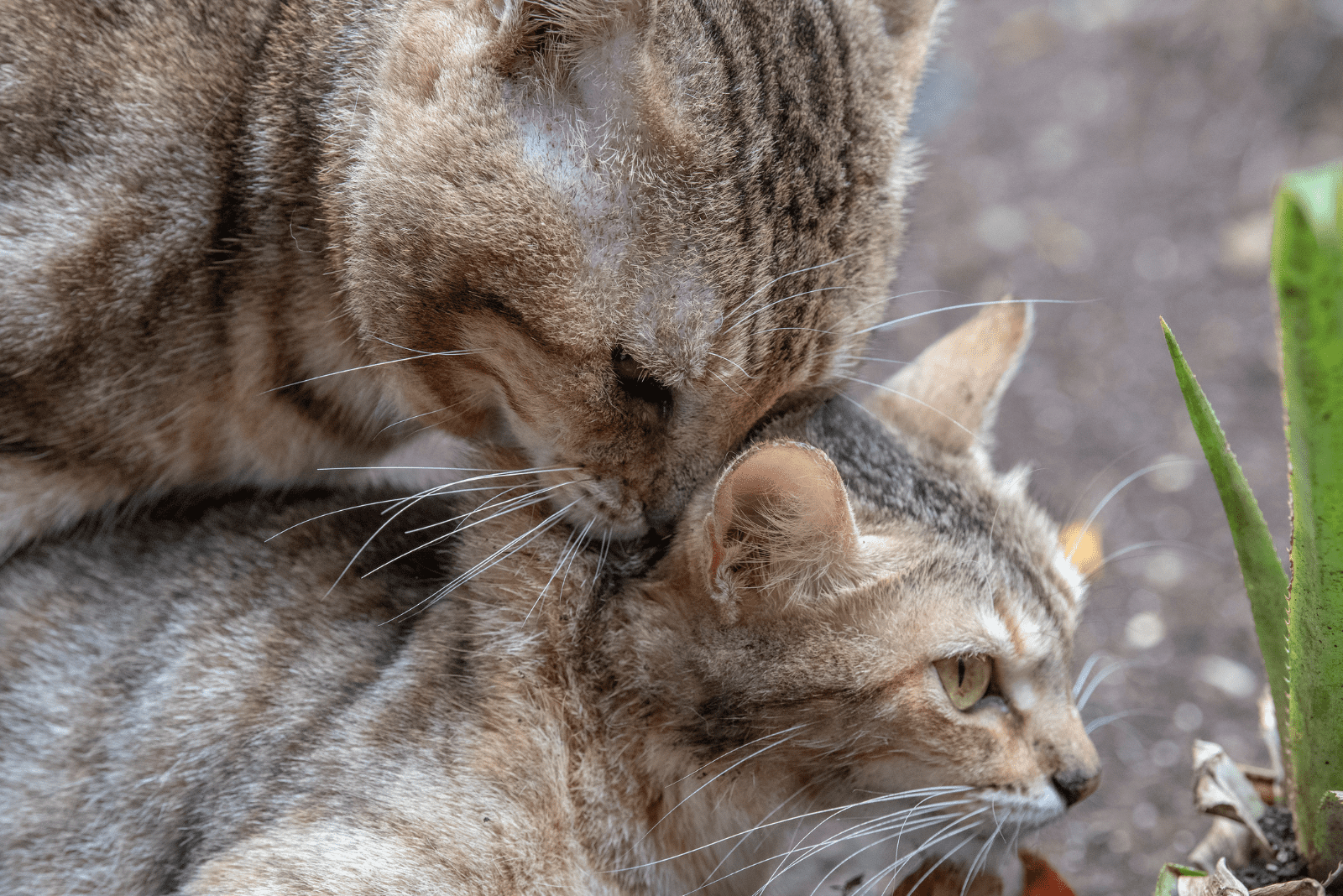 What is hiding behind a cats cry during mating? The reason might sound shocking, interesting, or just ordinary. Cats scream during the mating process because male cats have scratchy reproductive organs.

Because of the male barbed penis, cats feel pain and the scream helps them endure it. It is not uncommon for male cats to scream in response to a female cat’s screams, and those screams are a natural reaction to stimulation responsible for ovulation.

Cats release a few loud noises when they’re ready to mate and during the mating process. However, female cats are more likely to be vocal than male cats. But, male cats also have their unique sounds and calls in order to respond to the calls of female cats.

Why do cats scream when mating? Well, if you have a female cat that has been in heat, you’re 100% familiar with the noisy trilling call they do during the whole week of their heat cycle. Some cats can be really loud than usual, while others will live through the heat cycle a bit quieter, but that depends on the cat’s personality.

The trilling call they make is usually much louder when a female cat is just about to ovulate, and she needs Tomcat by her side.

When we talk about heat cycles, it is essential to mention that cats are induced ovulators. What does that mean? It means that their ovaries aren’t stimulated to release eggs. So the ovulation stimulant is actually a male cat’s penis that consists of spiny barbs that scrape the female cat’s vagina during the mating process. There goes the scream!

Besides the yowling, it is expected that the female cat will put up a fight and run away from the Tom cat, but he will stop her by holding her by the neck with his teeth.

Why Female Cats Scream During Mating?

We’ve learned that a female cat will scream and screech and even try to run away from the tomcat because she’s enduring real pain. During the mating process, cats caterwaul, and it is really, really loud.

Are Cats In Pain When Mating? 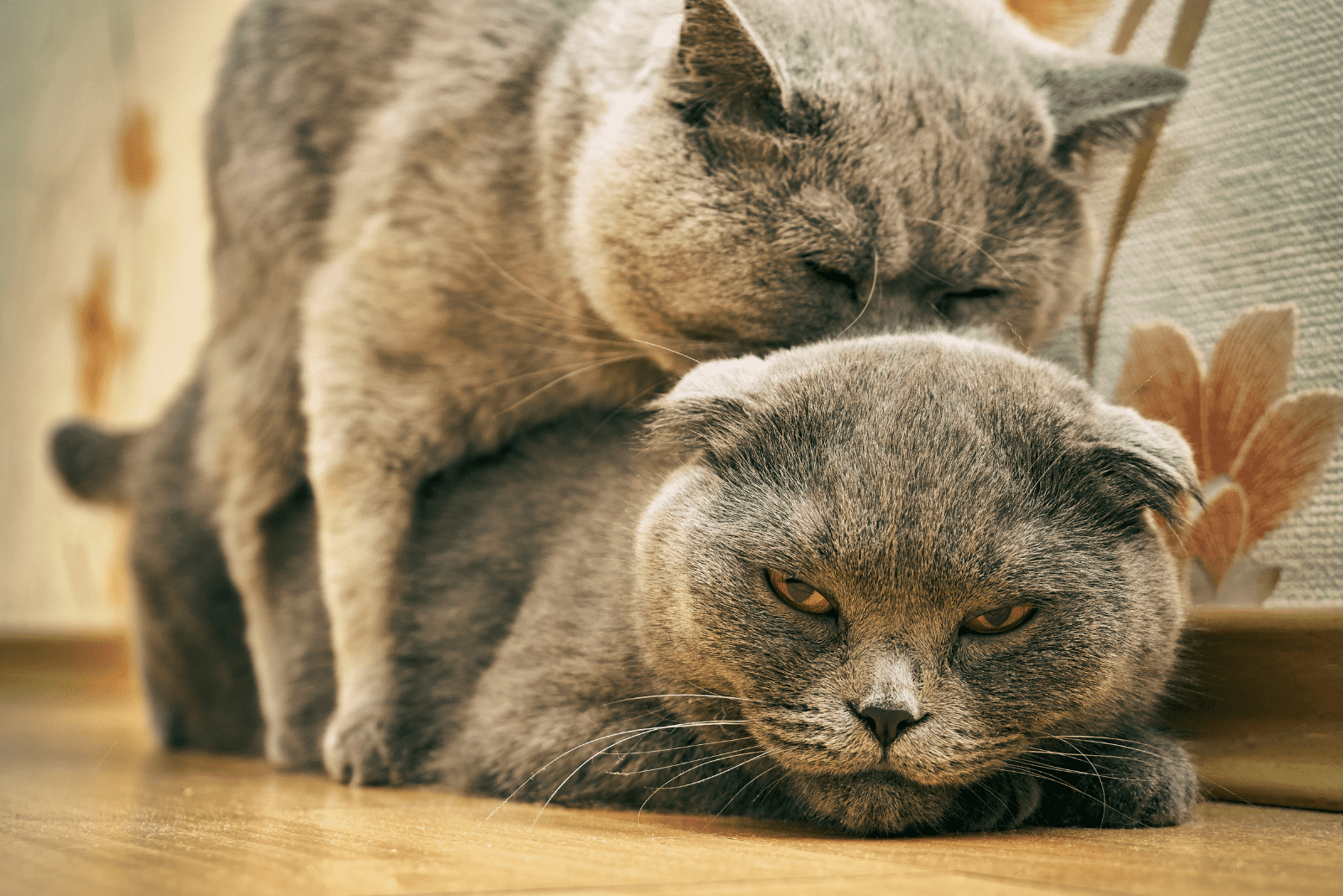 As we already mentioned, the male cat’s penis is barbed, meaning the genitalia is covered in small keratinized spines that are responsible for the cat’s ovulation. The spines are also responsible for keeping the penis not falling out during copulation.

However, many people think that female spines are bleeding. But that is not the case. Female spines activate a hormonal shock that stimulates the neuroendocrine system. And that gets activated around 23 to 36 hours after mating.

During intercourse, the female cat changes differently. After the withdrawal of the penis, the female cat’s pupils begin to dilate, and most of the females start to meow really loud. They’ll probably go to attack the male after mating, spinning, and licking their genital area.

Why Do Cats Scream In Heat?

Do female cats scream while in heat, and why do they do it? Yes, many cats do it in heat before the mating process even happens.

We need to look at cats in order to understand this cat behavior. Female cats are usually called queens if they are not spayed. The first heat can happen even early as 4 months of age. Queens can be in heat many times if it is breeding season, which is usually from February to October. When you think about it, it is almost the whole year.

While the females are in heat, they’ll show behaviors characteristic of mating, such as rubbing against objects, rolling, yowling, and kneading their back feet. Each of these characteristics cats do, they do to attract a Tomcat.

How Do Female Cats Act After Mating?

Female cats will behave erratically after mating. However, it is important to note that your female cat can be truly unpredictable after mating and become a bit aggressive, so you’ll need to give her some time to calm down.

It is likely that female cats will intimidate a Tomcat that is hanging around her after mating. That is because of that hormonal shock we mentioned earlier, and she needs time to process it and be ready to mate again.

• grooming themselves, especially the private parts

However, this behavior passes pretty fast since the cat is ready to mate again. Many cats will mate 2 days for 3 to 4 times. They might even prepare themselves for another mating session after 30 minutes, and they’ll again attract the males with yowling and other cat tactics.

But, cats don’t mate for life and aren’t that picky when breeding. That’s why it is common for cats to mate with many males, and one litter of kittens can have multiple fathers.

Why Do Female Cats Roll After Mating? 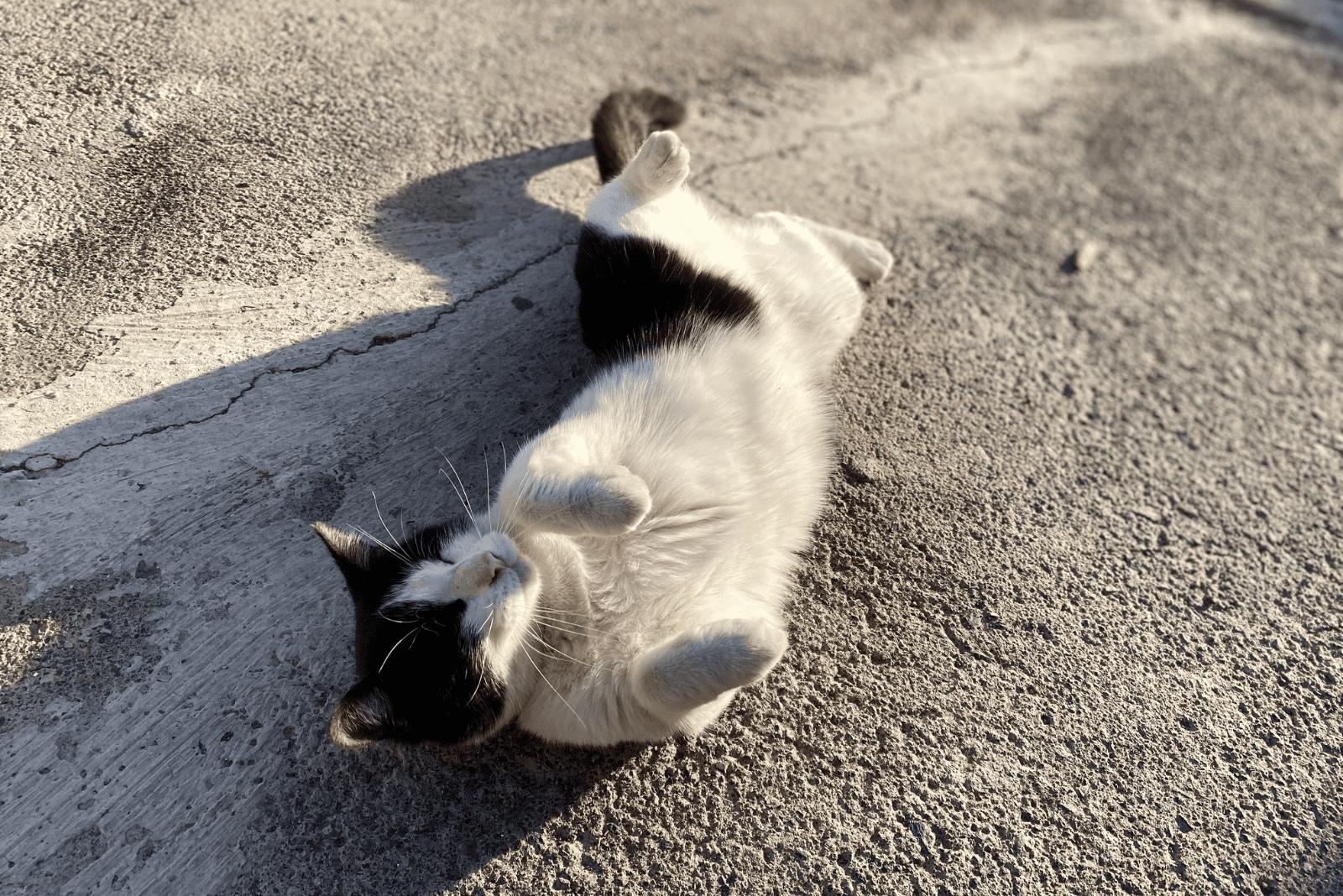 It is pretty challenging to explain cat rolling after mating. It is probably a reaction that has to do with hormones and ovulation. But, rolling on their backs can be a way to release the tension, get rid of the Tomcat scent, or spread her scent in order to attract different male cats interested in mating.

One thing is sure, female cat rolling after mating is totally a normal thing to do after mating, so you don’t need to be worried about your cat.

Do Cats Stay In Heat After Mating?

This question is a bit hard to answer. The mating process will not end the heat right away, but the cat will get out of heat after a couple of days.

Since mating and male reproductive organ activate ovulation, your cat and her body will move into the next phase of the hormonal cycle, whether the cat is pregnant or not, since the ovulation has occurred. However, hormonal changes will continue throughout the pregnancy and will stop the heat while the cat is pregnant.

Bear in mind that your cat needs several days to exit the heat cycle, and she probably won’t be calm right away. The vital thing to know is that the cat will return to heat two or three weeks after mating.

We need to mention also that if you are a breeder or you have a cat that accidentally got pregnant, you must be aware of the fact that female cats can be ready to mate and get pregnant while they’re nursing the previous litter. That can cause severe pain to their bodies, so if you don’t want it for your cat, make sure to spay or neuter it.

How Frequently Do Cats Mate?

When we remember that cats mate from February to October, we can say that they mate almost the entire year. The breeding season is typical to occur from March to September.

Female cats’ heat cycles start in puberty, which means a cat is in heat when she turns 5 to 10 months of age.

Factors that influence the cat’s heat are:

• the change of seasons (Spring/Summer)

But, remember, if conditions are perfect, a cat can become pregnant and give birth no matter the time of the year.

Cat’s heat cycle happens regularly during their years of reproduction, and they are called polyestrous for the record. Each heat cycle lasts a few days to two weeks, and it happens every 2 to 3 weeks.

It is still an unknown fact whether heat cycles are painful for our Queens, but luckily we can see the signs that the cat is in the heat, and it appears she’s in heat almost the entire time. But, judging by the loud noises and other factors, they seem uncomfortable.

How To Know If Your Cat Is Pregnant? 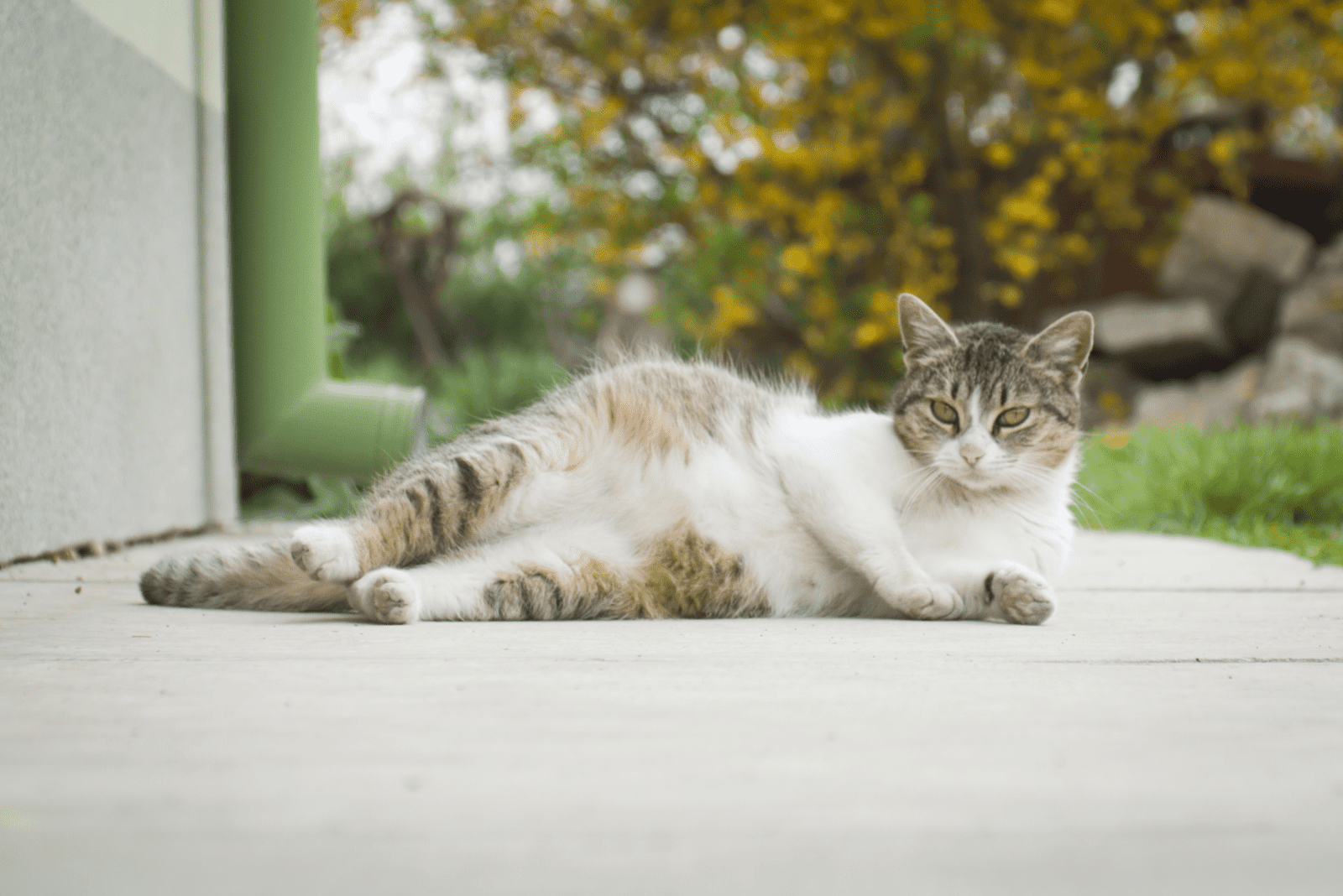 If you’re thinking, is my cat pregnant or just fat, think no more, as we’re going to help you discover a pregnant cat.

It is unlikely that the cat will become pregnant after the first mating, but those chances are higher and higher with each mating. Hence the multiple mating.

The signs of pregnancy in cats:

But, those signs of pregnancy could also be signs of pseudopregnancy, but luckily after 30 days of successful mating, the pregnancy can be determined on ultrasound and x-ray; you can see how many kittens are there.

The cat pregnancy usually lasts around 2 months, so you have a little time to prepare for many kittens in your home.

We want to mention also that unspayed cats have three litters of kittens per year, and usually, their pregnancy gives four kittens. When you put 2 and 2 together, that s 12 possible kittens in one year.

Why It’s Important To Spay/Neuter Your Cats?

Before concluding the article, we want to inform you about the importance of spaying and neutering your cats and irresponsible cat breeding.

• It will stop unwanted pregnancies and help decrease the abandonment of stray cats.

• There is an overpopulation of kittens and cats, and with each litter every two months, there will be no homes for them.

• A new litter of kittens will decrease the case of adopting adult cats and litters from previous years that wait in shelters.

• Many kittens end up being stray and feral cats, while the mother cat, as we mentioned, can have four to five litters a year.

• Tom cats don’t wait for heat cycles so they can have even more children.

• Sadly, female cats can have many health problems in their reproductive organs, even fatal infections of the uterus. The pyometra is fast and needs aggressive treatment. It is needless to say that taking care of a cat that suffers from this infection is genuinely challenging, and you can not notice it early.

We are aware of the fact that you want only the best for your furry friend, and your cat’s health is a top priority to you. That’s why it is crucial to consider spaying or to neuter your cat in order to avoid all those problems that accompany unwanted pregnancies, health issues, and so on.

Female cats do it because of the barbed reproductive organs of the Tomcat, which causes physical discomfort for the Queen. Toms will return the vocalizations in response to the female scream.

It is essential for you to consider spaying or to neuter your cat. Don’t we want less homeless kittens and sick female cats after all?

• Why Are Male Cats Called Toms?

• Why Does My Cat Meow When I Pick Her Up?