Skip to Content
Written by Logan Michael in Health & Happiness last updated April 2022
BetterWithCats.net may earn a small commission when you use one of the links on this page to purchase. 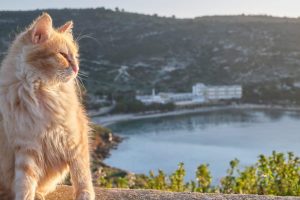 Cats have been our companions since ancient times and just as our civilization progressed their numbers grew. But what is the exact population of cats and which countries have been claimed by these furry overlords?

Exactly how many cats are in the world? It’s hard to know the exact number of cats around the globe, but recent statistics show us that it can be anywhere from 200 million to over 600 million, including housecats, strays, and feral cats.

We’ve done the research; we’ve gathered the data and now we present to you 7 interesting facts about the worldwide cat population. If you want to find out how it all began, who’s more popular cats or dogs, and whether cat islands are real, keep on reading.

Cat Population Around the World

Millions of feral and stray cats roam the streets and millions of house cats curl themselves safely on our lap, all of them scattered across all continents, (excluding Antarctica).

But just how many cats are there in the world?

Because of a cat’s size and ability to avoid humans, it’s difficult to assess their exact population. Recent studies have shown that over the last 4 decades, the numbers have increased drastically. According to the Ecology Global Network, there are 600 million small cats worldwide in contrast to their wild cousins whose population barely reaches 100 million and most are on the verge of extinction.

The United States has the highest population of cats in the world, reaching a staggering number of 75 million cats, followed by China at 53 million and Russia almost 18 million.

A 2007 report showed that about 37 million U.S households were proud owners of cats, with an average of 2.2 cats per household. It’s truly impressive and heartwarming to know that in the U.S 31% of cats are adopted from animal shelters, while only 3% of cats are bought from a breeder.

Everyone knows about the ongoing battle between the alluring and mysterious cat lovers and the outgoing, energetic dog lovers. It’s a common enough argument, which can come between the best of friends. According to Euromonitor, a market research firm, it’s a popular topic in most countries and it shows that the world is divided into cat countries and dog countries.

The American Veterinary Medical Association reveals that cats in the US outnumber dogs by almost 4 million and that the US itself is divided into cat-friendly and dog-friendly states. For instance, while Arkansas is in favor of dogs, outnumbering the cats by 1.35-to-1, Massachusetts outnumbers dogs by 1.87 cats for every dog.

The U.S might seem quite balanced when it comes to their favorite pets, but the rest of the world looks more divided. While most countries in Western Europe have a deep appreciation for cats Ireland, Portugal and Spain don’t share the same appreciation and prefer dogs to cats. Most of Asia is also dominated primarily by dog countries, while the Middle East and parts of Africa have a long history of favoring cats.

Some sociologists suggest that there’s a correlation between a balanced pet preference and developed economies, while others claim that culture, history, and climate are factors that also need to be considered.

So, who’s the number one pet you may still ask? Well according to the latest numbers the simple answer is, Cats. While 36.5% of households in the US have dogs and 30.4% have cats, the number of cats as pets still exceeds the number of pet dogs by 5 million. In the European Union, the global dog and cat population of 2018, showed that there are 75 million cats in households, in contrast to 65 million dogs.

All It Took Was One Cat

Did you know that it only took one curious cat and a space of 10,000 years to have millions of cats living amongst us? Domestic and feral cats all over the world have one thing in common and that’s a single ancestor, the Near Eastern Wildcat. This wildcat decided one day, 10,000 years ago to be precise, to leave its old life behind and join humans in their struggle to transition from hunting to agriculture. Most likely motivated by the chance to eat fresh fish!

So, next time you look at your cat, sleeping carefree on your lap, remember that their one single ancestor marked the beginning of the cultural adolescence of humankind, simply by keeping the rodents away.

Cat Owners, It’s Time to Talk About You!

You might argue that cats don’t have owners and that in reality, we’re just mere servants chosen by our feline masters and I couldn’t agree more! So perhaps the question is how many cats are living with humans?

In 1985, approximately 95.6 million cats lived in US homes, while in Europe it was 66.5 million, exceeding the number of dogs. Years later, a study in 2007, showed that more than 500 million cats lived with humans all over the world.

These studies usually don’t include farm cats whose number per farmhouse can be anywhere from 20 to 50 cats. Even though technically they do live with humans, farm cats mostly rely on killing rodents to survive and any other prey available to them. In a sense, they are considered service animals rather than house animals.

An interesting fact about cat owners is that even though cat ownership is commonly associated with women, a 2007 poll in the US showed that both men and women were likely to have a cat and many statistics show that the same number of men and women own cats. So, it comes as no surprise that the term cat-daddy has been very popular these past few years.

There are many factors to consider before determining the exact number of cats living around the world. One would be, whether we’re adding feral cats to the equation. While collecting data on domestic cats from most places might prove easy and trustworthy, there are millions of cats living their lives out in the streets, fields, and as far as possible from human interactions.

Many researchers suggest that excluding feral cats all together can become tricky since many cats hold an uncertain status, between wild and domestic cats.

Feral cats were once domesticated, but at some point, they were either abandoned, lost or they simply chose freedom. First-generation feral cats are referred to as strays and are usually found in urban habitats.

As much as we love our kitty companions and we tend to keep them inside our homes, it’s important to understand that cats were primarily kept outdoors and on farms where they worked to keep the house and land free from rodents. The biggest shift in this dynamic came during the 1940s, when cat litter was invented.

In 1985, the number of housecats exceeded the number of cats, thanks to the constant development of cat litter, which eliminated the unpleasant odor of cat urine. In addition to litter cats are small animals and they can live in smaller spaces which made it easier for city people to keep cats inside their apartment.

Basically, we’ve got to thank cat litter for making it possible to keep cats inside our homes and closer to our hearts.

Even though the population of cats is on the rise, there’s still a worldwide balance between the cat and dog numbers. There are, though, a few places, which not only have a ridiculous number of cats in regard to dogs, but also to humans.

According to the animal welfare groups report, there are 1.5 million cats on this gorgeous island, while the human population is only 1.2 million. The underfunding of spraying and neutering services has been the major cause of this increase, as well as the quality of life which the locals offer to their street cats.

Known for its beautiful beaches and historical buildings, Syros is also home to a notable cat population. They’re part of the nature preserve in Syros and the God’s Little People Cat Rescue takes care of all the local cats.

Occasionally the sanctuary is on the lookout for a “Cat-whisper”, someone who’s knowledgeable in feline psychology, who will feed, and care for more than 50 cats, in exchange for a living wage and free accommodation. This job reached global news when it was shared more than 26,000 times on Facebook! (I’m not surprised!)

Once a quiet island, now a tourist attraction, Aoshima is the place you want to be if you love cats. It’s literally referred to as the “Cat Island”! The cat population there exceeds about 6 times the human population. With only 15-20 residents, the island is also home to 120 cats.

The cats were originally brought in by the fisherman to deal with the rodent problem. Today the Aoshima cats enjoy a carefree life among the elderly residents, who make sure they’re treated like royalty.

Tashirojima is another small island famous for its raising cat population. Here the human to cat ratio is balanced. 100 people and 100 cats walk the streets in friendly unison. The island was known for raising silkworms for their silk and thus, became infested with mice. Naturally, the residents brought some cats to deal with the problem.

Enoshima is the third most popular cat island in Japan. Because it’s so close to Tokyo, a lot of tourists travel to Enoshima, to gaze upon the four-legged residents.

The cat population saw an increase from the 80s and it’s known for their friendly nature. Of course, it all comes down to individual personalities so don’t take it too personally if the cats you meet on Enoshima keep running away, after all the problem is you not them!

Russia has the largest number of cats in Europe, reaching up to 18 million cats. Some of these cats serve their country by living in one of Russia’s greatest museums, the Hermitage Museum in St. Petersburg. This practice dates back to 1745, initiated by Empress Elizabeth, daughter of Peter the Great.

The story of each cat is the classic tale of rags to riches. All of them were once street cats brought to defend the great works of famous artists from rats and mice. Currently, there are 65 cats living in the basements of Hermitage and three people tend to their everyday needs. After serving for a few years, each cat is free to be adopted by a family, so they’re guaranteed a long life of luxury!

What a truly magnificent ride, full of twists and turns! But could you expect anything less from our mysterious familiars? Just a single question of “how many cats are in the world”, opened up a box filled with 7 intricate answers which took us back 10,000 years, when the first cat decided that we had some potential as a species.

And look at us now, they practically rule the world!

What are your thoughts on this? Are you from a cat country or a dog country? Which cat island would you travel to?