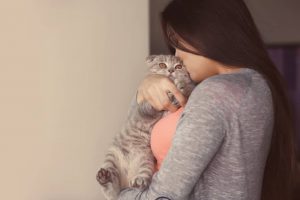 I love coming home after work to find my cat waiting for me by the door. Once I’m inside, she rubs against my legs, I pick her up, and she lets out a cute little meow.

But what does that meow mean? Why do cats meow when they’re picked up?

For my cat, it is very normal! I would be more concerned if she didn’t meow when I picked her up since I take as a little feline confirmation that they’re happy about being scooped up.

But just because it’s normal for my cat doesn’t make it normal for all cats so let’s take a closer look at what your cat may be trying to tell you!

Why Do Cats Meow At Humans?

Before we start going over the various reasons why a cat might meow when picked up, let’s make sure we’re on the same page about why cats meow at humans.

There are many reasons why cats vocalize, but according to Professor Bjarne O. Braastad at the Norwegian University of Life Sciences, adult cats meow specifically for humans. Adult cats might communicate with each other through hisses, trill, or chirps but they typically don’t meow at each other.

Mewing and meowing is something kittens do when they want help or attention from their mother.

When kittens go to a new home, they keep using these sounds to get attention from humans. Over time, the kitten realizes that their new human also responds to meows. They also learn to adjust their pitch to mimic the tones humans make!

All that means it’s important to realize that your cat’s meow is, most likely, for you!

7 Reasons Why Your Cat Meows When Being Picked Up

So, the reason your cat meows when you pick them up is they’re trying to communicate something with you — but are they telling you that they love the attention, or are they asking you to put them back down?

To answer that question, let’s consider seven of the reasons why a cat meows when picked up.

Reason 1: Your Cat Likes Your Company

Some cats meow when they’re picked up because they like the affection! By meowing, they’re trying to get your attention and tell you that they want to be near you.

Pay attention to the body language that accompanies the meow. If your cat relaxes in your arms, gives you a head bunt, and isn’t trying to escape, that meow was their way of saying “hello, how nice to see you!” and that they’re content being picked up.

Some cats might even trill when they’re picked up! Trilling is typically associated with happiness — and it’s always an adorable sound to be greeted by when you pick your furry friend up.

Reason 2: Your Cat Is Hungry

Your cat seems to want your attention…but when you pick them up, they let out a high-pitched meow and squirm to be put down.

Before you start worrying, gently set your cat back down and see if you can determine what they want.

If your cat attempts to lead you over to their food dish, there’s your answer! Leading you to their food bowl or sitting by their food bowl while meowing means your cat is ready for a meal. That sudden meow was your cat’s way of telling you “Hey, I don’t want to be picked up! I want you to feed me!”

Reason 3: Your Cat Doesn’t Like How You Picked Them Up

Even a cat that normally loves being held will meow if they’re picked up in an uncomfortable way. That meow is just their way of letting you know that you need to change your approach!

When picking up a cat, make sure to fully support the cat’s whole body. Avoid scruffing your cat or lifting them by their front legs. It’s also important to give your cat time to get used to your presence before scooping them up.

Check out the video below to see how a vet picks up a cat without causing any distress.

Reason 4: Your Cat Is Stressed

Just like humans, cats have various emotions and moods. If your cat normally doesn’t mind being picked up, but suddenly starts meowing when she is picked up, consider whether or not something has changed in the household. Increased vocalizations are one of the signs of a stressed-out cat.

Stress can be caused by several factors. Visiting houseguests, the arrival of a new baby, subtle changes in routine, medical concerns — whatever the reason, a stressed kitty isn’t going to want to be picked up.

Not all cats like being handled! That meow is their way of letting you know that they don’t want to be picked up and that they need you to put them back down. Depending on temperament, some cats might even become physically aggressive.

If a cat was mishandled or injured in the past, being picked up could make them feel threatened. Not to mention, most cats prefer being in control over what happens to them! Experts at Nottingham Trent University suggest that giving a cat control over whether they are picked up or petted helps them feel more relaxed and happy.

I always have to resist the urge to scoop up every new cat that I meet! But I know that a cat that isn’t comfortable with me is far more likely to meow and struggle to be put down.

If your cat is still relatively new to your household, they’re still getting used to the scents and sights around your house — getting picked up for a cuddle is going to overwhelm them.

Let your new friend have some time to get used to your presence and scent. Vets and animal behaviorists recommend allowing new cats to approach you on their own terms. This will allow your new family member to have some sense of control within the relationship. They will (most likely) be willing to let you pick them up in the future.

Eventually, you may even become your cat’s favorite human and earn full pick-up privileges!

Unfortunately, sometimes a meow is a sign that your cat is in pain or is physically unwell. Picking up a cat that isn’t feeling well can amplify whatever pain they’re feeling.

If your cat normally doesn’t meow when they’re picked up or if they’re showing other signs of discomfort, take this new development seriously.

Call your veterinarian, especially if the meowing is accompanied by other signs of a medical concern, such as changes in mobility, a swollen body part, trouble breathing, or dilated pupils. A veterinarian can help figure out if there is an underlying medical condition that is causing your cat to meow when picked up.

Should I Worry If My Cat Cries When I Pick Them Up?

If your cat is crying in a way that is high-pitched and startled when picked up, take your cat to a veterinarian to rule out medical issues.

Most cats try to hide their pain and discomfort. Cats seldom meow or cry out when they’re in pain — they typically only do it if they’ve reached a point where they can no longer hide the symptoms.

Visiting a veterinarian is the best way to determine what could be causing them to cry out. If your veterinarian determines nothing is wrong, you’ll at least have peace of mind knowing there is nothing wrong with your furry friend.

It can be particularly concerning when a cat’s meow turns into a higher-pitched and longer whine. If a cat starts whining when you try to pick them up, that is a definite sign that the cat is uncomfortable with being picked up.

Some cats have negative associations with being picked up. Maybe they’re only used to being picked up to receive medicine, or maybe they have been mistreated in the past. Continuing to try and pick up a cat that doesn’t want to be picked up is only going to create more discomfort for the cat.

And for some cats, being picked up feels like an attack. You might be trying to hug your kitty, but their natural feline instincts kick in and urge them to run away from the situation.

Remember, your cat is a serious predator but they’re also small enough that they’re still prey for many species. That means some cats just won’t ever be comfortable being held and a whine could be their way of letting you know.

What To Do If Your Cat Dislikes Being Picked Up?

Just like other pet behaviors, there are many reasons why your cat might meow when they’re picked up! Pay attention to that meow — it’s one of the ways your cat communicates with you. But also pay attention to their tone and body language to fully determine why they’re meowing.

Because I know my cat’s overall personality, I know he meows when I pick him up because he’s happy to see me. It’s normal behavior for him! But what about your cat? Do they normally meow when picked up?