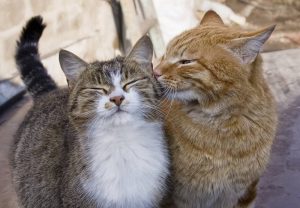 It’s always interesting to look at the relationships that are formed in the animal kingdom, including our domestic cats. One of the most popular fun facts around animals is whether or not they’re monogamous and mate for life.

So do cats mate for life? While there are famous examples of monogamous animals that mate for life, cats are certainly not one of them. A female cat in heat will actively seek out as many male mates as possible. As a result, it’s not uncommon for the same litter of cats to have different feline fathers!
But there’s a lot more to cover when it comes to the very un-monogamous relationships of our feline friends so let’s dive a little deeper.

We’re going to talk more about feline reproductive behavior but anytime the subject comes up I always want to stress the importance of spaying and neutering your cat. Spaying your female cat can help reduce the chances of her developing breast tumors which are “malignant or cancerous in about 50 percent of dogs and 90 percent of cats.” While less common, neutering can also eliminate the chance for testicular cancer or prostate problems in male cats.

Many of the reproductive-related behaviors are a bit annoying or in some cases even dangerous. Female cats in heat will be vocal during all hours of the day (and night) while looking for a mate and even present themselves to other animals. That’s how obsessed they become with finding a mate!

Just check out this video of a female cat in heat…and a very confused dog:

Male cats will try to get out of the house and travel great distances to find a mate so it should be no surprise that young, male cats are the most likely to be hit by a car as they constantly seek out females.

We’ll talk more about these behaviors and how they impact feline relationships but if you’re ready to spay or neuter your cat check out this directly of free or low-cost clinics from PetSmart Charities.

Female cats are what’s called polyestrous which means they enter multiple stages of fertility over the year. This state of heightened fertility is commonly referred to as being in ‘in heat’ and it’s usually very obvious when a cat is in heat. Female cats will vocalize loudly and frequently in order to let male cats know they’re looking for a partner. During this time, female cats will also roll around on the floor and present their hind end to the world. Even if there are no signs of male cats in the house!

Female cats in this state will try hard to leave the house and find a mate…or more likely more than one. As the folks at the International Cat Care Society point out, “Several males may congregate around the female and, while a male on his own territory may be more confident of winning any fight that might break out and thus a chance to mate with the female, she may have her own preferences.”

During this stage, a female cat will mate several times with several males- as many as 10 to 20 times in a single day! This is actually a pretty common practice in nature and by taking on multiple mates, female cats can ensure genetic diversity and decrease the risk of running into a sterile male.

Male cats are also eager to mate and more than willing to travel to in heat females. Some studies suggest that a male cat can smell a female in estrus up to 2 miles away and most male cats are happy to make the journey. Unlike female cats, male interest isn’t cyclical and they’re willing to mate as long as there’s a female available.

But the journey in search of a willing female can be dangerous and I’ve already noted that male cats that haven’t been neutered are statistically more likely to be hit by cars than other felines. However, it’s not just cars that these persistent suitors have to avoid though. While female cats are willing, male cats will have often have to fight other males in order to get their chance to mate. It’s not uncommon to see an outdoor tomcat with dozens of scars, pieces of their ear missing, and other signs of battle.

As if things weren’t already rough enough for the unneutered male cat, these fights can often transmit Feline Immunodeficiency Virus or FIV. The folks at Cornell Veterinary explain, “Because FIV is transmitted through bite wounds, un-neutered male cats with outdoor access, especially those who are likely to fight with other cats, are at the greatest risk for FIV infection”

FIV affects the immune system of cats and while studies suggest that cats can live a full life even with the disease that’s not always the case for the outdoor tomcat that doesn’t have access to veterinary support.

Why Do Females Mate With Multiple Males?

If you look objectively at all this, it might seem a little inefficient.

After all, why would the female need to mate with so many males in order to get pregnant…she can’t get more pregnant, right?

Well, she kind of can! While “more pregnant” isn’t exactly the right wording, litters of kittens can have different fathers if the female cat takes on different male mates during their estrus cycle. And since we know that instead of mating with one cat for life females are interested in finding as many males as possible it’s not a stretch to see how this could happen. This is called superfecundation and it’s relatively common in species with larger litters.

While it’s rare in humans, it can happen and the results can be pretty interesting!

What About Big Cats?

So we know that our domestics cats and their feral cousins certainly aren’t monogamous and don’t mate for life but what about other members of the feline family like lions, tigers, and cheetahs?

Most cats, including the big cats, have similar polygamous behavior and take on several mates. There are some variations however and female lions, for example, are usually limited to the males that make up their pride rather than any lion in a three-mile radius.

So your little housecat isn’t the only polygamous feline!

Do Any Domestic Animals Mate For Life?

Cats are pretty far from mating for life and instead opt for as many mates as possible to ensure successful reproduction and plenty of genetic diversity. But not only are they not monogamous, the reproductive process for cats includes several annoying or even dangerous behaviors. From yowling in the middle of the night to traveling great distances just to fight another male for the chance to mate, it’s safe to say that the reproductive process is stressful for cat parents and cats don’t always get out unscathed either.

That’s just another reason to spay and neuter your cats!