Skip to Content
Written by Logan Michael in Health & Happiness last updated June 2022
BetterWithCats.net may earn a small commission when you use one of the links on this page to purchase. 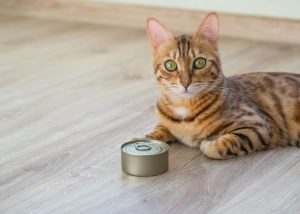 We already know that most cats love tuna. But what about the water that it comes in?

Can cats drink tuna water? Yes, in most cases, cats can drink tuna water in moderation. But because of concerns around mercury, you wouldn’t want to make tuna water or juice a regular part of your cat’s diet. Instead, it’s best a treat or as a way to encourage your cat to drink more water.

With big differences in sodium content, additional ingredients, and potentially harmful artificial flavors it’s best to stick with the simplest tuna possible. My favorite is Wild Planet’s tuna which uses third-party testing facilities for mercury testing. They aren’t the least expensive option but it’s worth it to me and you can see the latest price on Amazon by clicking here.

Just keep in mind, that Wild Planet tuna doesn’t have any added water so if you want to give your cat a nice tuna drink you’ll have to add in some water on your own.

But let’s take a closer look at tuna, tuna water, the major differences between the brands, and whether or not it’s a healthy treat.

While cats can drink tuna water there are some important things to consider before you crack open that can!

While you’d expect a can of tuna to be only a can of that’s often not the case. It’s not uncommon to see ingredients like soybean oil, vegetable broth, or olive oil mixed in with the tuna.

When it comes to feeding our cats tuna water or juices we want to make sure we’re going for tuna that’s set in water with limited other ingredients. Even seemingly benign ingredients can actually be quite problematic!

One example is the use of artificial fish flavor which can make its way not only to tuna but also some cat food. According to Japanese researchers, “fish flavoring in pet food might contribute to feline hyperthyroidism, because of cats’ lower ability to metabolize the chemical compounds found in the food.”

Focus on tuna brands that keep things simple with ingredients like tuna, water, and salt.

Should You Worry About Sodium?

When it comes to our own nutrition, sodium is a pretty big deal. High sodium diets in humans have been connected to high blood pressure and increased strain on our cardiovascular system.

But is this the same case for cats?

Probably not. At least according to veterinarian Jennifer Coates who reviewed dozens of studies on salt intake and felines only to find that “So while we have to watch our salt intake, it appears that we don’t have to do the same for our cats.”

BPA is a type of plastic that’s commonly used in food packaging- especially in metal cans and bottle tops. While there’s a lot of controversy around BPA and the potentially harmful effects it has it’s probably best to avoid or limit the amount of BPA your cat is exposed to.

Over the last several years, concerns around BPA have become more prominent and it’s a lot easier to avoid. Still, make sure the tuna you’re purchasing isn’t the bottom of the barrel and is at least BPA conscious. You can learn more about Wild Planet’s position on BPA here.

Can Cats Eat Tuna In Oil?

What tuna that comes set in oil?

Can cats eat tuna oil? While it’s probably okay for cats to have a small amount of tuna flavored oil it’s best to avoid it. The high fat content of the oil is likely to upset your cat’s stomach and cause diarrhea. There’s also a lot of variation on the type of oil used and not every oil is good for your cat.

The most common oils used are vegetable oil and olive oil. Neither of which are in line with your carnivorous cat’s natural diet. In fact, your cat is what’s called an obligate carnivore which means that in the wild they would only eat animals. In other words, there are no vegetarian cats in the wild!

Is Tuna Water Good For Cats?

Most cats go crazy for tuna water but is it actually good for them?

Tuna water isn’t particularly healthy for cats but it’s not dangerous either as long as it’s given in moderation. Tuna, or tuna water, should never be the primary food source for cats as it just doesn’t have the right nutrients to keep cats healthy.

But let’s take a closer look at what makes tuna water good or bad for cats.

Cats are notorious for not drinking enough water and the prevalence of chronic kidney disease in cats has been estimated as high as 3.0%! But cats also have a low thirst drive and according to Hills Science Diet because cats have a low thirst drive “they don’t feel the need to drink water very often. If your cat is dehydrated, you may not know it until she develops a problem.”

Some cats love tuna a little too much. According to Cat Behavior Associates, some cats will become so obsessed with tuna that they refuse to eat anything else. Some veterinarians call these cats “tuna junkies” and even though that name sounds a bit silly it’s actually a real concern.

So while it’s okay to mix in some tuna water don’t get carried away and turn your cat tuna crazy!

How Much Tuna Water Can I Give My Cat?

First, the number of calories in tuna water is going to be much lower than in the actual tuna. Depending on how much you dilute the tuna water, the amount of calories could be barely noticeable.

Then there’s the issue of nutritional balance. An all tuna diet not only lacks the needed nutritional balance but some studies even suggest that it can cause negative behavioral changes! Again, if you’re offering your cat tuna water as a supplement instead of tuna as a meal then you don’t need to worry about these issues.

Finally, there’s the issue of mercury. Tuna naturally absorb mercury from the deep-sea environment and it becomes concentrated in their tissues. When humans or cats eat tuna, we’re also eating some of that mercury. Over time, this can build up and cause a long list of issues. According to veterinary nutritionist Cailin Heinze of Tufts University, mercury poisoning in cats is relatively rare, and occasional tuna treats are probably safe but “but we advise against feeding your cat tuna-based foods on a daily basis.”

Dr. Heinze also goes on to say that cat owners should focus on canned chunk-light-tuna and “not albacore, which is from a larger species of tuna with mercury levels almost three times higher.” To clarify, skipjack tuna is the type of tuna used in most light tuna products, like the ones Dr. Heinze is recommending.

Even though mercury is stored in the tissue of tuna, we expect some of it to be present in the tuna-soaked water that we feed our kitties. Unfortunately, there’s no study specifically on tuna water so a set-in-stone guideline is going to be hard to find. Your best bet is to keep things in moderation and if you really want to add some variety to your cat’s diet consider some other drinks that are safe for cats to consume like bone broth and goat milk.

How To Make Tuna Juice for Cats

The process for making some yummy tuna juice is pretty simple but it will depend on the type of tuna you’ve purchased. If you’ve gone with the Wild Planet tuna you’ll need to do a little more work since it doesn’t come packaged with extra water.

In a small bowl, mix in tuna and a cup or two of water then mix it around. Try mashing the tuna up with a wooden spoon and then strain the extra chunks of tuna to leave the remaining tuna water or juice.

If you pick up tuna already in the water (like StarKist) simply drain the tuna from the cat into a small bowl and you’re all set!

But here’s a little tuna water pro tip for you: take the tuna water and freeze it so you have it ready to go whenever you need it without having to worry about it going bad. Then when you want to give your cat a little treat, just drop a cube in the water bowl and let them find it.

I like to use these ice cube bags from Amazon so I don’t have to worry about stinking up an ice cube tray with the fish smell but just about anything will work. You just don’t want your tuna water to go bad while it’s in the fridge.

Can You Buy Tuna Juice For Cats?

While it’s not exactly called tuna juice there are several cat food brands that make food toppers that can be added to a cat’s regular diet. I’m a big of Tiki Cat already (you can read my review of their food here) and I was happy to see that they offer a tuna flavored topper which they call Tiki Cat Broths. You can read reviews (they’re most good) and see the latest price on Amazon by clicking here.

Tuna water can make a great treat for cats! It can help cats stay hydrated and give them the delicious flavor of tuna while minimizing some of the downsides of feeding your cat plain tuna!

Are you regularly feeding your cat tuna water?