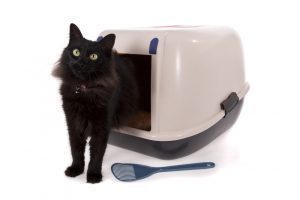 Everybody does it…including our cats.

It may not be something we love to talk about but it’s still an exceptionally important part of taking care of our feline friends.

Of course, we talking about pooping and peeing. I know, gross.

We often make the assumption that our cats operate in the same way that we do which means taking care of all our bathroom needs in one “sitting”. But is that really true?

Do cats pee and poop at the same time?

Most of the time, cats do not pee and poop at the same time and instead, these are usually separate occurrences. It’s not uncommon to see cats use one litter box for pee and a second litter box for pooping.

It may not be the most glamorous topic but let’s take a closer look at what’s going here and why some cats seem to prefer separating their 1’s and 2’s.

Why Should We Care That Cats Pee and Poop Separately?

You’re about to read a lot about your cat’s potty habits and at this stage, you might be thinking…why do I need to know all this?

Because understanding your cat’s bathroom habits is a big deal!

Not only can your cat’s urine and feces give you a ton of insight into the overall health of your feline friend but by understanding your cat’s bathroom preferences you can enjoy a happier feline along with a decreased chance of urinating outside the box.

So if we care about our cats, we should care about their bathroom breaks!

That means one cat will need two boxes (but not next to each other) and three cats will need four litter boxes and so on. Not only are cats not good at sharing litter boxes, but you want to make sure they can separate their pee and poops if that’s what they prefer.

Bathroom Breaks Are About Territory

Of course, going to the bathroom is a natural function for cats just like any other animal.

But it’s also about territory and cats use both urine and feces to mark their territory. In the wild, this would help cats understand who controls what territory and minimize the chance for conflict which could be equally dangerous for both cats.

Even though cats may not need to defend their territory (AKA your house) from other felines the instinct is still alive and drives cats to carefully make sure they’re making the most out of their bathroom breaks.

When you look at a cat’s biological functions from the lens of territory, it makes sense that they would pee and poop separately and not at the same time. After all, separating their biological needs would give them the opportunity to mark more territory more easily.

We may not always think of our cats in these terms but we see similar behavior in dogs who are so much less subtle about what they’re doing. Dogs desperately want to add their scent to the go-to spots (fire hydrants are the classic example) and also save their poop breaks for prime real estate.

The ability or habit of peeing and pooping separately is important for this to work and one of many ways that cats claim their turf. Even though cats are (ideally) not using urine and feces to mark their territory in your home, the habit of keeping things separate still remains.

Why Do Cats Prefer Different Boxes For Pee and Poop?

Not only do cats pee and poo separately but in many cases, they pee and poo in separate boxes. Let’s look at a few reasons to explain this peculiar feline behavior.

We know that our cats love to be clean.

But honestly, that’s a bit of an understatement. According to veterinarian Pamela Perry, cats typically spend between 30 and 50 percent of their day just grooming themselves. With that much effort going into staying clean, it’s no surprise that a preference for staying clean would extend into bathroom breaks.

Cats may feel that they can enjoy a better bathroom experience with more clean spots to dig by keeping the boxes separate.

Live Science explains that cats bury poop in order to show that they aren’t looking to actively challenge any territory and they explain that many big cats will purposely leave their poop unburied as an open challenge to other cats. Submissives cats, on the other hand, will bury their stool for the opposite reason.

Your cat’s decision to make one litter box the urinal and the other toilet could have to do with their perception of territory.

Similar to the previous reason, cats also bury their poop in order to avoid attracting any unwanted attention from potential predators. Live Science explains that “even though there are no predators in your home, your cat may not be so sure, and will bury its waste just in case.”

Your cat may have decided that one litter box is a safer choice for keeping the scent of feces down while the other is a better option for urine.

We’ve just presented several plausible reasons for this feline preference but sometimes it just comes down to instinct and cats may not have any reason for doing what they do.

Instead, it could just be part of a cat being a cat.

Like grooming half the day away and curling up for a nap during the other half, even if there are scientific explanations for why cats do what they do in some cases it’s just part of a cat being a cat.

Do Cats Pee and Poop…Out Of The Same Hole?

However, in female cats, the urethra doesn’t have a separate opening (as it does in humans) and instead is tucked within the vagina. That means female cats use the same opening for urine and for mating.

Can Cats Pee and Poop At The Same Time?

Yes! Even though cats don’t make a habit of doing both at the same time, they certainly can do it.

That’s everything you need to know about cats separating the 1’s and 2’s!

Even though this info may just seem like purely interesting information only, it is practical and further enforces the importance of having enough litter boxes since many cats will preference to separate their liquids and solids.

I know it may not be exciting to read all about your cat’s pee and poops but your feline friend thanks you for learning everything you can about them so you can be the best cat parent you can be!