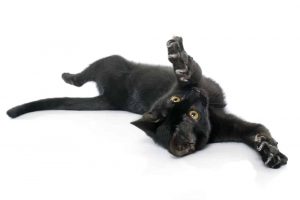 Sometimes cats choose to communicate in very subtle ways. You know, like a slow blink of approval and friendship or just a slight chirp when you start petting them.

Other times, cats choose to be anything but subtle, and one of my favorite forms of unsubtle cat communication comes in the form of the flop!

So why do cats flop down in front of you? While it can have many meanings, it usually signals that your cat loves and trusts you. Your cat’s tummy is their most vulnerable spot and they would only flop around if they feel very safe and comfortable.

But as is often the case with feline behavior, there’s a lot more than just one answer. So let’s look at all the possible explanations for why your cat might be practicing the flop and roll. Remember, a feline flop doesn’t mean only one thing.

Your cat’s behavior is complex and so several of these reasons could all explain ONE flop!

Let’s get into it!

If your cat flops down in front of you when you get home or maybe while you’re trying to do something else around the house, there’s a good chance your cat is seeking attention from you! Especially if it looks anything like this professional feline flopper:

The first time most cat owners see something as adorable as this, it’s almost impossible not to give your cat a little petting. This only reinforces the behavior and eventually, your cat will know flopping down in front of your will lead some quality petting! Or at the least very least some attention!

But it’s important to note, just because your cat is exposing their belly doesn’t mean they actually want to be pet on their belly! As cat behaviorist Pam Johnson-Bennett points out, “A cat is an incredible predator but she’s small enough that she’s also prey. That’s a heck of a lot of pressure on [your cat]. As prey, the last thing a cat wants is for a larger predator to have access to her most vulnerable area where vital organs are located. The typical response for a cat who has her stomach touched is to spring into defensive mode.”

Besides an instinctual feeling of discomfort, belly rubs can cause many cats to feel overstimulated. While we can’t know for sure exactly what cats are feeling, it’s pretty clear that most cats have a distinct threshold for when petting goes from pleasant to uncomfortable. For many cats, the belly is simply a no-go petting zone altogether.

Unfortunately, the cat flop can often lead to a lot of miscommunication, especially since dogs have done their best to call the flop their own. Most people recognize the dog flop as an open invitation to rub their belly while cats will seem completely shocked that you would even consider equating their flop to a request for belly rubs!

So if you’re lucky enough to experience your cat happily throwing themselves on the floor in front of you, focus on the typical petting spots like the cheeks. The video above does a great job of showing how to properly pet a flopping kitty.

Your Cat Is Marking Their Turf

Cat’s are naturally territorial creatures and in the wild individual cats would control small areas of land. Cats have scent glands on their feet, cheeks, face, and tail and they’ll often rub their cheeks on different surfaces in order “mark” or claim their territory. Many cats will flop in front of their owners and then vigorously mark the ground with their cheeks as the roll back and forth. This spreads your cat’s scent and lets the feline world know that this is their territory.

That also explains why your cat likes to rub your legs. They’re basically saying, “Hey, this human is mine. So back off and find your own human to flop for!”

Is Your Cat In Heat?

For unspayed female cats, flopping and rolling is a normal part of the mating behavior. A Cambridge University study found that “Females rolled mostly while they were in heat. Adult females rolled almost exclusively for adult males.” In this case, your cat flopping in front of you might not actually have anything to do with you at all! Instead, it’s your cat’s way of letting the world know that she’s interested!

When cats flop and roll while in heat they may vocalize a bit more or try to keep their butts up while rolling. Yes, it’s as silly looking as it sounds.

The first 25 seconds or so of this video shows exactly what I’m talking about:

While it might be cute to see your cat in heat acting silly, cat overpopulation is a serious problem in the world.

Sadly, there are more cats in the world than homes for them so always do your part by spaying (and neutering) your cats! If it turns out that your cat’s flops are related to her being in heat, you can check out Pet Smart’s clinic locator to find a low-cost spay/neuter clinic in your area. Oftentimes you can even get your cat spayed completely for free!

Catnip can make even the most distinguished and well-to-do feline turn into a little rolling maniac and it could explain your feline’s flop. Catnip contains a compound called nepetalactone and that’s primarily what your cat is reacting to.

One of the most common reactions is rolling around in it or marking it with their cheeks. Check out this video of a little cat Tigger who seems to have found a secret stash of actively growing catnip:

His catnip rolls look very similar to a cat that might be marking their turf with a cheek mark or a cat that just wants attention. While a surprise catnip stash isn’t the most likely reason why your cat might be flopping in front of you, you might be surprised at how many cat toys include catnip in them that you might already have around the house. By the way, one of my favorite catnip toys for Debbie are these little mouse toys that come in a pack of 20 Amazon.

Your Cat Wants To Play!

Your cat might just enjoy playing with toys (or you) while on their back and flopping over in front of you is a good way to let you know that they’ve decided it’s time to play! If you’ve ever seen your cat get really into a toy to the point where they engage the rabbit kick or kitty kicks then you know that it usually starts with a flop or roll first!

Here’s a great example of a happy kitty showing us a flop into the kitty kick using a pretty clever homemade toy:

Some of it will depend on what you’ve done with your cat in the past and what kind of behavior you’ve reinforced after the flop. If every time your cat flops your reward them with a weird stuffed sock to wrestle then there’s a better chance that your cat will start use flops as a way to ask you to play!

It might also just feel good for your cat to flop and roll around on the floor. Not only is a big stretch of her muscles but the texture of the floor might feel like a little back scratch for your cat. Kinda like a bear rubbing his back on a tree, your cat can use the floor as a DIY back scratcher!

This could especially be true if you find that your cat likes to flop in one part of the house over another! While we usually think of cats as constantly seeking the perfect sunspot to lay in, they might find that rolling on the cool tile floor feels really nice sometimes!

While many people are already familiar with the way dogs roll on their back as a sign of submission, it’s unlikely that your cat is showing submission towards you. While that same Cambridge University study on feline flops did find that younger males would roll in the direction of adult males, the reverse was very unlikely to occur. That leads them to conclude that “that rolling may act as passive submission and inhibits the development of overt aggression.”

But this is much more likely to occur in a cat-cat interaction than in a cat-human interaction. Unless your cat is playing or you’ve gone for an unwanted belly rub, you’ll usually see your cat taking on relaxed and loose postures that don’t line up with an act of submission.

Well, we might not have completely decoded the feline flop but we’ve at least got a good idea of what it means. While one flop could mean many different things, most of the time it simply means that your cat loves and trusts you!