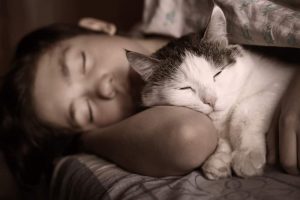 Cats have probably been waking people at night for as long as they’ve lived with humans.

Okay, I may not have any ancient Egyptian art of a frustrated cat parent pushing their cat out of the bedroom but it’s safe to say that cats don’t always show the most respect for our slumber.

But do cats really just not care about our sleep or is there more to it? Do cats even know that we’re sleeping?

Cats also seem to clearly understand that they need to put in a little more effort to get us moving during these periods of inactivity.

Let’s look a little closer at this and try to figure out what cats think we’re doing when we crawl into bed.

Do Cats Understand The Concept Of Sleep?

After all, it’s an idea that we take for granted but it’s really a pretty complicated concept that requires some understanding of consciousness compared to being unconscious.

That explanation alone should tell us that cats probably aren’t considering sleep on these terms but still clearly know that something is different. Similar to the idea of whether or not cats know we love them, our feline friends don’t need to fully understand the idea of sleep to have a practical or working understanding of it and that’s what we’re going to assume for most of this article.

How Do Cats Know We’re Asleep?

While cats may not understand the idea of sleep from a scientific perspective, they do have plenty of cues for figuring out what’s going on.

Let’s look at a few of them.

While cats might not understand the finer points of REM sleep, or our lack of it when they get a case of the zoomies at 3:00 AM, our cats can most certainly appreciate a good routine.

So while your cat may not fully understand that you’re unconscious, they know that you’re not doing much of anything at roughly the same times every day. They also know that this happens whenever you crawl into bed and there are several predictable things that happen before (like brushing your teeth, taking a shower, etc). On top of that, cats know that to get your attention during these times, they need to work a little harder.

By thinking of sleep in these terms, you can start to see how cats may not understand sleep but they know enough about our routine to figure out what’s going on.

Cats are deeply connected with and perceptive of the world around them…including us.

While dogs often get the credit for super senses, there are plenty of stories of cats detecting cancer and much more concrete examples of cats consistently predicting seizure activity. With those kinds of credentials, detecting the many physiological changes, like a decrease in respiratory rate or a reduction in muscle tone, will be easy for cats to detect.

Again, cats may not think to themselves, “Oh, her respiratory rate dropped so she’s asleep.” But instead, it’s part of a more general understanding of sleep as part of our routine and how it impacts our activity.

Do Cats Care That We’re Asleep?

We can safely say that all cats can figure out the idea of sleep but whether or not they care will greatly depend on the individual feline and the responses they get from disturbing your sleep.

Some cats will naturally learn to ignore us while we’re asleep since they know it will take much more effort to get our attention. So despite how much they hate that the door is closed or how eager they are for breakfast, they just wait patiently until we become alert again.

Other cats will have less tolerance for our sleep and simply jump on our heads until we wake up. Even more persistent cats may even decide to give us a lick, a nibble, or both in order to get us to wake up.

But the biggest factor in how cats act is what you do.

If you get up to feed your cat when they try to wake you up then you just reinforced that behavior. That’s an obvious example but in some cases, it doesn’t take much to reinforce behavior and even just acknowledging your cat’s attempts to get your attention could be enough.

Beyond how you react, it’s important to understand why a cat is waking you up so you can then resolve the problem. That’s a much bigger subject and you can learn more about how to manage this problem here.

If the issue is food, and it often is, investing in a solid automatic feeder is usually a good place to start.

It’s pretty clear that cats know something is up with us every night. While they may not understand the finer points of sleep, or see it as the same thing they do, cats do seem to have a practical understanding of our slumber.

Cats know that we don’t respond as quickly and they’ll also notice the physiological changes that occur during sleep which makes it clear to them that something is different.

But whether or not they care will be up to the individual feline and how you respond!

What do you think? Is your feline friend respectful of your sleep?