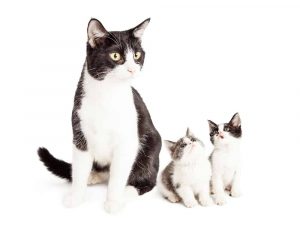 Correcting and disciplining kittens is a normal part of feline behavior and healthy socialization. Mom cats, also called queens, help kittens understand how to interact with other cats, how to play with their littermates, and help kittens learn what’s off-limits.

So how do most mom cats discipline their kittens? Most mom cats will start by just removing themselves from the situation. This sends a clear message that if the kitten wants to play or get attention they need to do it on mom’s terms. If the kitten persists, most moms will correct their kitten with a hiss or a light bop on the head.

But let’s look a little closer at how mom cats, and other adult felines, correct and discipline kittens. Let’s start by clarifying some important terms.

When it comes to any behavior modification, but especially in the case of dogs and cats, there’s a big difference between discipline and a correction. In most cases, people consider disciplining to be a punishment for negative behavior. When we think of our own human children, things like removing privileges or grounding often come to mind. These things work for humans because we can explain to our children what they did and why they’re being punished.

But that doesn’t work for dogs and cats. For example, if your cat urinates on the bed while you’re at work and you yell at them when you come home they’re going to have absolutely no idea that you’re upset about the urine on the bed. They just can’t make the connection and this is where a lot of pet parents run into problems.

A correction on the other hand happens at the exact moment and is a direct response or reaction to the unwanted behavior. It’s also usually done in a way that immediately guides the kitten or puppy to the correct behavior.

Going back to the cat urine example, it would be like catching your cat in the act and immediately moving the to the closest litterbox. The cat would have a better chance of learning you’re upset, have a good chance of connecting that to the urination, and be redirected to an appropriate location.

In most cases, cat moms are correcting their kittens rather than dishing out punishments. A hiss or bop on the head is a way for cat moms to immediately say, “Hey, stop doing that you silly kitten.”

While I’ll be using both terms in this article, it’s important to realize that moms are correcting behavior instantly and that makes a huge difference!

Many Times Cat Moms Will Just Walk Away

Your attention is a powerful tool in training your cat and it’s no different for cat moms and their kittens. Simply walking away when a kitten is playing too rough or is too demanding sends a clear signal that the behavior is not appropriate and this is often the first method cat moms will use to correct and discipline kittens.

For a great example of this, check out the video below. In it, there’s a rather large kitten that’s still trying to nurse on her mom. This kitten is certainly ready for normal cat food and I’m sure mom isn’t excited to have those teenage cat teeth latched on her. As soon as the kitten wiggles her way under mom to start nursing, mom cat simply walks away.

Of course, it takes a few tries but the young cat eventually gets the picture that nursing isn’t going to happen.

Other Times Mom Cats Will Use Vocal Corrections

If kittens still aren’t getting the picture, mom cats may need to take things up a notch and correct a kitten with a growl, assertive meow, or a hiss. These are all distance-increasing behaviors that kittens will instinctually understand aren’t good. While my cat Debbie has never been a mom, she’s helped me take care of dozens of foster kittens, and the only time I’ve ever seen her hiss is at a kitten.

The little kitten was biting her tail and back legs. First Debbie walked away but as the kitten followed and continued to chomp away Debbie turned and hissed at the kitten letting him know that she was serious. And it worked, the kitten was startled and stopped. Kitten socialization in action!

Vocal corrections are most often used if a kitten persists even after mom has walked away. If a kitten just isn’t getting the message or bites down too hard during playtime then mom will often let out a loud meow. This will often startle the kitten and let them know that they took things too far.

Mom Cats Will Also Use Quick Physical Corrections to Discipline

If kittens still aren’t getting the picture mom cats will use physical corrections like light bites or bops on the head to correct and discipline their kittens.

You can see this play out in the video below. The kitten is playing with her mom’s tail, which is a classic kitten playtime, and mom seems to be tolerating it but not exactly excited about it. Still, she remains in place and allows her kitten to continue playing with her tail but when her little kitten takes things too far with a hard bite she instantly turns to correct him with a bit of her own.

This isn’t done to hurt her kitten but it doesn’t provide an instant correction and lets the kitten know that the bite was just too hard.

How Do Kittens Correct Littermates?

It’s not just cat moms that help kittens learn! Kittens are constantly taking cues from the littermates on what’s socially acceptable and what’s not. One of the most important things kittens learn is how much is too much when it comes to biting and playing. This concept of biting, but not too hard, is called bite inhibition and it’s the idea that cats can learn to moderate the power they put behind their bite.

When a kitten bites their littermate too hard, their littermate will let out a loud cry and often try to run away effectively ending playtime. Many times kittens won’t get this on the first time but they eventually learn that every time they bite too hard playtime ends and no kitten wants playtime to end!

This is one reason why it’s important for kittens to socialize with other cats. Kittens that grow up without littermates or a mom cat can sometimes have behavior problems as they grow up. While I think this idea is somewhat overblown, same species socialization is still important.

My cat Debbie was found alone at 2-weeks old and needed to be bottle-fed every two to four hours!  While she never had a mom (besides me) I made sure to pair her up with other solo kittens so they could both get some much-needed socialization.

Should I Discipline My Kitten Like A Mom Cat?

If your kitten has no mom or you just want to do your part to socialize your kittens, you might be wondering if you should discipline your kitten in the same way as their mom would?

While you can use the same ideas that a mom cat uses, you certainly don’t want to nip or bite your kittens. Hopefully, that wasn’t on the table to begin with!

Here are some ways you can apply mom cat style discipline to your kittens:

Give Bad Behavior the Cold Shoulder

Remember our first example of the teenage kitten that still wanted to nurse?

Mom didn’t vocalize or bop her kitten on the head; instead, she just walked away sending a clear signal that if the kitten wants attention she needs to drop the nursing. The same signal is used between littermates. When one kitten takes playing too far their littermates let them know that playtime is over by running away.

The cold shoulder is often times the best and easiest way to correct bad behavior in cats and kittens. One reason why it’s so effective is that it’s completely unambiguous. Trying to push your kitten away or give them a little tap on the butt could easily be confused with play and actually encourage whatever behavior you’re trying to discourage.

While the cold shoulder is the best approach, vocalizations can also be effective but you’re going to have to use some feline language to pull this off!

Your kitten won’t have any idea what “No” means but a hissing sound or even a loud high-pitched yelp will make sense to your young cat. As with most behavior training, timing is critical and whatever noise you make has to occur immediately after the undesired behavior.

For a good example of how this might work, consider the case of a biting kitten. While you should avoid letting your kittens play with your hands altogether if your kitten does bite your hand consider letting out a loud yelp just like their littermate would. Then pull your hand away and end the play sessions. This cold shoulder and vocalization combo will send a clear message to your kitten that bites aren’t welcome!

While mom cats discipline their kittens it’s not always in the same way that we would expect. Instead, they might be better described as quick, in-the-moment corrections that immediately tell young kittens where the boundaries lie. Just like human parents, there are usually different levels to disciple and the reaction will depend on the type of behavior and how many times the kitten has done it before.

While we can certainly incorporate the cat mom corrections that we’ve learned about to raise social, cuddly, and happy kittens we won’t ever be able to fully replace the socialization that kittens get from cats and other kittens!