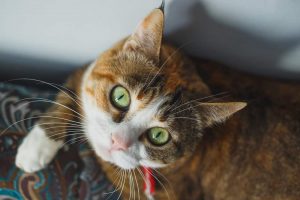 For some cats, catnip has no effect at all. But for others, it’s like powdered zoomies where one sniff and your feline friend will be off to the races.

To say the range of reactions is wide would be a major understatement.

Still, even with so many different possible reactions, many folks recommend using catnip as a way to attract our feline friends to various parts of the home including the litter box.

But can you really add catnip to the litter box? Is it okay to do?

While you can add catnip to the litter box to attract cats to it, this technique can be very hit or miss. Around 20% to 50% of cats have no reaction to catnip at all and catnip can actually encourage inappropriate house soiling in others so it’s probably better to explore other options.

Instead of catnip, consider using a product that’s purposely made to attract cats to the box.

Some of these can be hit or miss as well but they’re still likely to be more effective than catnip. Additionally, simple techniques like keeping the litter box clean, selecting the right location for the box, and picking out the ideal litter and litter box will all usually make a bigger impact than anything you can add to the box.

That may sound a little different from what a lot of other sources suggest so let’s take a closer look at what into this advice.

What's Inside show
4 Reasons Why Catnip Isn’t A Great Option For Making The Litter Box More Appealing
1. Not All Cats Are Attracted To Catnip
2. Catnip Can Attract Cats…But That Doesn’t Mean They’ll Use The Bathroom
3. Catnip Reactions Are Unpredictable
4. Catnip Could Even Cause Litter Box Problems
What Can You Add Instead?
Always Start With Litter Box Basics
Closing Thoughts

Let’s break down 4 reasons why catnip isn’t a great option for leading our cats to the litter box.

1. Not All Cats Are Attracted To Catnip

Attraction to catnip is hereditary and not all cats carry the appropriate genes. While estimates vary, somewhere between 20% to 50% of cats won’t have any reaction at all to catnip. If your cat falls into this category, they’ll still realize that you’ve added something to the box but it won’t interest them much either way.

So before relying on catnip to draw your cat to the litter box, make sure they have the right genes to react to it in the first place!

2. Catnip Can Attract Cats…But That Doesn’t Mean They’ll Use The Bathroom

If cats do carry the appropriate gene to find catnip interesting then there’s a good chance that the smell will attract them. In fact, catnip can be used to attract cats to litterboxes, gardens, and just about anywhere else.

It’s the smell of nepetalactone that makes catnip, catmint, and other plants that are part of the Lamiaceae family appealing to felines. It isn’t just your house cat that loves to roll around in these plants and tigers, lions and other big cats are also fans of catnip!

Cats also have a sense of smell that’s 14 times stronger than our own so while we might not notice the addition of catnip in the litter box it’s likely that our feline friends will easily notice the change.

But attracting cats isn’t the only thing we need to do.

Especially if they’re suddenly experiencing the intense brain changes that catnip can cause!

Cats will know where the litter boxes are without the smell of catnip. Whether you’ve put the litter box in the garage, bathroom or even the bathtub cats will be able to track it down. So you don’t need to worry about catnip as a tool to show your cat where the litter box is and instead the idea is to make the box more appealing for the ones and twos.

But there’s nothing about catnip that will consistently make cats want to use the litter box which makes the whole idea of adding it in a bit problematic.

What do most cats do when they start enjoying catnip?

They’ll usually rub their entire body in it (especially their cheeks and head) along with vocalizing, salivating, and general excitement.

None of which you’d really want your cat to do in the litter box, right? While it’s usually adorable to see your cat flop around, it’s not so cute if it occurs in the litter box! Other cats may not flop at all and can become irritated and agitated- once again not feelings that are conducive to taking a bathroom break.

Just look at the litter cats below to see how different their reactions are to catnip and ask yourself if you’d want your feline friend doing those things in the litter box!

Even though cats can react in a wide range of ways, veterinarian Romana Turner explains that in most cases a cat’s reaction to catnip is most similar to the way female cats act in heat. These in-heat behaviors include all the rolling and vocalization that we already mentioned but they can also commonly make cats react on a bit of a hair trigger- the same way a female cat in heat might.

In short, you can’t say for sure just how your cat will react when they find catnip in the litter box but we can say that the majority of feline reactions to catnip aren’t conducive to using the litter box!

4. Catnip Could Even Cause Litter Box Problems

While it’s rare, catnip could cause some cats to actually urinate outside the litter box which is the opposite of what we’re looking for!

How could this work?

Because catnip essentially creates a sexual response in the feline brain by causing cats to react to an artificial feline pheromone.

Cats that have this reaction may be more prone to mark their territory (just like they would when an available mate is nearby) and while cats have a variety of methods for marking their turf one of the most important is urine. Cats that are hyped up on catnip could decide to urinate in a variety of locations around the house instead of the box!

While this is rare, I’ve spoken to some cat parents who have seen this reaction and as a result, they’ve had to ban catnip from their household. Some cats just can’t handle their nip!

What Can You Add Instead?

So if catnip is out as a technique to encourage cats to use the box, what can we do instead?

There are a variety of cat litters and specific additives that are specially designed to encourage cats to use their litter box. That’s quite different from catnip which has a very different purpose.

The biggest name and my personal favorite is Dr. Elsey’s brand of cat attract litter. Not only is the clumping litter great, but it comes with a special blend of herbs that draw cats in and make them want to potty in the box. Dr. Elsey and his brand are also the real deal and they originally made cat attract litter to help solve litter box problems and keep cats in the home.

The litter has a whole pile of positive reviews from happy cat parents which you can see on Amazon by clicking here. If you don’t want to completely change litters or start mixing things up, which can cause its own problems, Dr. Elsey also makes a standalone attractant that you can add to any litter and you can check it out here.

Either option makes a great choice, especially when compared to adding catnip.

If you’re having problems with cats using the litter box, which is probably why you’re turning to catnip in the first place, make sure that all the litter box basics are under control.

That means making sure you have enough litter boxes for the number of cats you have, that they’re regularly cleaned and that they’re spread throughout the house. Simply adding litter boxes and keeping them clean is enough to solve many litter boxes issues and a better place to start before you decide to add anything to the litter box.

While you can add catnip to the litter box, it’s not a great way to solve litter box problems or even get your cat interested in the box. Our feline friends will easily be able to smell where their litter is without the addition of catnip. Additionally, exposing them to the brain-altering powers of catnip isn’t the best way to get them interested in using the restroom.

Instead, consider litter box attractants that are specifically designed to encourage cats to use their litter box. However, the best place to start is always with the basics like having the right amount of clean and well placed litter boxes for your cats!

What do you think? Have you had a different experience after adding catnip to the litter box?