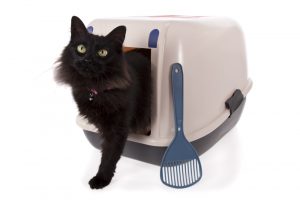 Figuring out where to put your cat’s litter boxes feels like a simple enough decision.

However, when it’s finally time to pick a spot, it can feel like you’re trying to find a good spot for a box of poop…because that’s exactly what you’re doing. And when you think of it like that, suddenly it seems impossible to find the perfect spot.

The bathroom makes sense for a litter box location, for obvious reasons, but there’s not always enough room in the usual spot next to the toilet.

But what if you have an extra bathroom? Can you put a litter box in the bathtub?

An unused bathtub can make a great location for a litter box as long as your cat can easily jump in and out of the tub. The bathtub will help collect litter but you still want to avoid letting it go down the drain as even a small amount can lead to clogged pipes.

That’s the quick answer to get you started and if you have the space the bathtub is one of my favorite spots for a litter box location. You can keep the litter box smells in a secluded area that’s still not too far away for your cat and the addition of a partially closed shower curtain means that the bathroom looks completely normal at a quick glance.

But let’s look a little closer at everything you should consider before placing the litter box in the bathtub!

Make Sure The Bathtub Isn’t Being Used Regularly

Okay, I know this should be obvious so let’s just clarify this quickly: you should never try to place a litter box in a bathtub that’s being used with any regularity.

Even if it’s being used every other day, that’s still too much.

Many cats aren’t going to hold it when the tub is in use and instead of waiting for the bathtub to be available, they may just use another spot for their bathroom break. Ideally, it’s another litter box but that’s not always the case.

And if the litter box is placed back in the bathtub after someone has recently taken a shower, the extra water may discourage cats from using that litter box again. While cats may like to lick the excess water after a shower, they certainly don’t want it on their feet when they enter a box.

While the process of getting your cat’s litter box set up in the bathtub is pretty straightforward, there are a few things to consider.

One of the big benefits of using the bathtub for the litter box location is easy clean-up and preventing litter from spreading around the house.

But you don’t want to take this too far and just let the litter go down the drain.

Assuming your plumbing isn’t from the 1700s, a few pieces of litter probably won’t cause a problem but if you’re making it a habit of letting litter run down the drain then you could quickly have plumbing problems.

But since many cat litters can absorb as much as 15 times their weight, it doesn’t take much to clog a pipe.

That’s why it’s a good idea to add something extra to the tub to catch the litter just like you would if you put the litter box anywhere else in the house.

It’s also best to avoid sending cat litter into the water supply because of the potential risk of spreading toxoplasmosis into the environment- even if you’re using flushable litter to try and minimize smell in a small space, you’ll still want to think twice. While the risk is relatively low with litter alone, there have been cases that linked cat litter and stool with the death of California sea otters so it’s generally best to play it safe.

So not only should have something to collect the litter but plugging the drain is a good idea as well.

Bathtubs can be a strange surface for cats and the smooth texture can be difficult to grip.

Still, I’ve found that most cats won’t care too much but as cat parents, our goal is always to make bathroom breaks and easy as possible for our feline friends. That’s why it’s a good idea to add a matt or some kind of additional surface that cats can easily grip.

Not only will it makes cats happy, but it will also help collect litter and protect pipes.

You can use just about any spare matt but if you want to purchase something specific for litter I suggest checking out this matt from Gorilla Grip on Amazon. It’s designed to be no slip so it should stay in place in your tub. It also has more than 23,000 five-star reviews on Amazon so that’s pretty darn good too.

Don’t Close The Shower Curtain Too Much

Being able to leave the shower curtain slightly closed also has the benefit of opening up a lot more litter box options, including an uncovered box even if you’re dealing with a smaller space.

Still, you don’t want the curtain to be completely closed, and while we’re tall enough that we can easily see into the bathtub remember that your little cat can’t actually see into the bathtub. That’s why it’s important to think about their route to the litter box and not block them with a shower curtain.

You can still leave the curtain closed enough to hide the box but leave one side open for your cat.

Make Sure Your Cat Is Comfortable Getting Into The Tub

Not all cats are going to be excited about jumping into the tub. Even though it’s a minor jump, older cats that are suffering from arthritis may be hesitant to make the leap and it’s the same reason why placing a litter box up high may not work for all cats.

Sadly, some studies suggest that 90% of cats over the age of 12 have some form of degenerative joint disease and while our cats are great at keeping this hidden from us it’s still something to consider.

To put it in perspective, a 12-year-old is the equivalent of a 65-year-old human and while a person of that age is perfectly capable of getting around they may not want to be forced to jump before taking a bathroom break!

Of course, cats are much more capable of jumping than us but you get the idea. So pay attention to how your cat gets around normally and consider offering your feline a small step or ramp for easy access to the bathtub.

So far, the bathtub seems like the ideal location for the litter box…but are there any downsides?

As long as cats are comfortable getting in and out of the tub and you avoid any plumbing problems the bathtub makes a great location and a much better option than somewhere like the kitchen.

It’s out of the way but still within your feline friend’s regular routes which is exactly what we’re looking for.

What do you think? Are you going to go the bathtub route for your feline friend’s litter box?