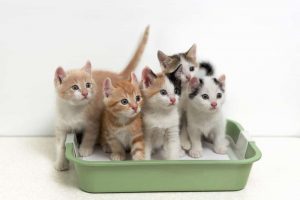 No matter how large of a home or apartment you have, there are only so many good spots to put a litter box.

While it’s not ideal, you can put two litter boxes together for a single cat but if you have multiple cats it’s not a good practice. That’s because cats will see the two litterboxes as part of one “litter box territory” instead of two separate boxes that they can individually claim.

If you want a more detailed explanation then keep reading- we’re going to cover everything you need to know!

Why Do Cats Need Multiple Boxes In The First Place?

If you’re wondering about placing two litter boxes next to each other then you probably already have some idea that cats need more than one litter box.

But let’s take a closer look at why!

Just like you wouldn’t be eager to use a trashed porta-potty for your next bathroom break, our cats don’t want to walk into a disgusting litter box!

Having multiple litter boxes makes it easier to ensure that our feline friends always have a clean bathroom. For multi-cat households, it also means they don’t have to walk over their roommate’s poop just to take a potty break!

Said more bluntly, many folks suggest that some cats prefer to use one litter box for poops and another for pee. I’ve fostered hundreds of cats, along with having my own cats, and I haven’t actually seen this phenomenon but I have read about it several times. If your cat does do this, please shoot me an email and let me know about it! I’d love to learn more about this habit!

Our cats are naturally territorial creatures and in the wild they’d control large areas of land. If you pay close attention to your cats you can probably see this in your home. Each of your cats probably has their own special spots where you can usually find them but not their feline roommate.

But territory isn’t just about the best place to nap. It also impacts other important resources like litter boxes.

When litter boxes are too close together, cats may see them as one block of feline turf. Instead of seeing the two boxes as separate areas, they view them as one area or territory that can be controlled by one cat.

This won’t be the case 100% of the time, and in some scenarios cats may break up the boxes but I wouldn’t count on it.

Using the bathroom is a vulnerable position to be in for any animal including your cat.

They aren’t exactly in the most secure position as they dig around the litter and everything that follows. Depending on your household, one litter box may have too much activity near it. That could be from people, pets, kids or anything else but whatever the reason your cat may not feel like using that particular litter box at that particular time.

That’s where additional litter boxes come into the picture and they allow your cat to always have a stress-free bathroom break option.

How Many Litter Boxes Do Cats Need?

As a general rule, you should follow the One Plus One rule which states:

You should have one litter box for every cat, plus one.

This rule is easy to follow in larger homes but when it comes to small studio apartments things can get a little tricky. Some folks are tempted to just place multiple boxes next to each other in order to reach the target number.

While this technically in compliance with the One Plus One rule, it’s not the ideal scenario and we’ll talk more about that soon.

But first, let’s make an important distinction between single cat and multi-cat households.

Why Is It Okay For A Single Cat To Have Litter Boxes Close To Each Other?

If you have one cat, they don’t have the same struggle for territory that you have in multiple cat households. That’s not to say cats are in a constant turf war with each other, but having their own designed space with boundaries is just a part of being a healthy cat.

This isn’t an issue with just one feline and so having two litter boxes right next to each other doesn’t have the same territory problems and you can still get some of the benefits of having multiple boxes that we covered above.

However, I’d only really do this if you have a small space like a studio apartment that’s similar to living in one room. In small spaces like that, it can be difficult to find two good spots for a litter box so placing two of them together can make for a decent alternative.

Why It Doesn’t Work For Multiple Cats

Of course, you can put two litter boxes together when you’ve got multiple cats but they aren’t going to help you satisfy the cats plus one rule.

That’s because in most cases your cats will see them as one “litter box territory” and not two separate boxes that can be shared. There will be exceptions to this but it’s not a good practice to force cats to share anything. Remember, it’s in their nature to seek out and control territory.

Does that mean it should be avoided altogether?

Not necessarily, by placing two litter boxes next to each other you’ll get all the benefits we’ve already mentioned including a cleaner place for potty breaks and choices for different outputs. You’ll just need to count them as one box when it comes to the cat plus one rule.

How Far Apart Should Litter Boxes Be?

The best-case scenario is to place the litter boxes in separate rooms but this isn’t always possible.

A minimum of 10 feet is a good rule of thumb to go by but even that is just an estimate. You’ll need to see how your cats interact with their boxes to really see what distance is ideal.

That’s because feline territory is a lot more complex than you might think at first. As the folks at Fear Free Happy Homes explain, “Rather than each cat’s territory being a specific room, they have something more like little islands.”

That means one cat may claim the windowsill in your bedroom while the other may claim the bed. Rather than laying claim to the entire room, each cat takes a smaller piece of the pie.  It also means that litter boxers as close as 5 feet could be considered two separate areas that can be claimed.

And while you might see this as an argument for putting them right next to each, there is absolutely a point where things are too close! Because of that, it’s usually best to go for different rooms or at least 10 feet to give your cats the best chance of considering the litter boxes separate territories.

Where Do You Put the Second Litter Box?

Okay, so if it isn’t a good idea to put two litter boxes right next to each…where do you actually put your second, third, or however many boxes you need?

Most folks try to put the litter box far away from the main areas of the house and while that can work as part of a collection of litter boxes, famous feline expert Jackson Galaxy suggests that it’s important to put the litter box in a socially significant location. For cats, that’s an area where they spend the most time hanging out with you and other people in the house.

There’s always going to be hesitation around that as no one wants to deal with a stinky box in the living room but remember when you have several boxes to choose from they’re going to be less stinky overall!

So let’s look at a few options for adding in extra boxes.

I don’t mean a litter box with a cover, instead, I’m talking about a litter box that’s hiding in plain sight!

Check this one out:

Yep, that litter box looks just like a potted plant and you can actually flip it around so even the entrance is hidden. With that setup, you can easily add a second or third litter box without anyone really noticing.

Keep in mind, that you don’t want every litter box to be covered as not only does this increase the stink inside the box for your cat but it also limits your feline friend to one escape route. Some cats won’t mind but others will prefer an open box for bathroom breaks. Still, this can make a great addition to your overall setup. You can check out the latest price along with the more than 11,000 five-star reviews on Amazon by clicking here.

Where To Avoid Putting The Second Box

Stay Away From Loud Areas

We’ve already talked about your cat’s need for a safe place to potty and loud noises aren’t going to make your cat feel safe. This is especially true for areas that are typically quiet but periodically loud like the laundry room or near the air conditioning unit.

Unfortunately, these are also some other favorite spots for folks to put a litter box.

But I’ve certainly had my fair share of cats that were absolutely bombproof and couldn’t care less about these noises. You’ll need to be considerate of your cat’s temperament.

Avoid Placing It Too Close To Food and Water

Would you be excited about having dinner in your bathroom?

Didn’t think so and your cat isn’t either!

Make sure to avoid placing the litter box too close to the food and water area. In general, keep it at least 10 feet away, and even better place the water bowls in an elevated spot above the litter boxes.

Stay Away From High Traffic Spots

High traffic, on the other hand, would be near the front door or in a major hallway. But it’s also going to depend on your specific home. If you’ve got a big family then there might be several high traffic areas to avoid.

Can Cats Find Their Litter Box If You Move It?

Maybe you’ve had two litter boxes close together for a while now and you’re ready to move them. Or you’re considering an overhaul after learning more about feline territory dynamics.

Will cats be able to find the box if you move it?

With a powerful sense of smell, cats will be able to find the litter box if you move it but you wouldn’t want to make it a habit. Cats are truly creatures of habits and unexpected changes could lead to problems including issues with actually using the box.

Consider adding an additional box in the new location first. After your cat has used the new location a few times, you can remove the old box and it should have less of an overall impact on your cat.

Despite their natural instincts to claim and defend territory, some cats will end up sharing a litter box. That doesn’t mean your cats aren’t still territory-driven for whatever reason they decided sharing worked for them at that moment.

However, just because cats are willing to do it doesn’t make it ideal and it’s still important to make sure cat aren’t put in a position where they’re forced to share important resources like food, water, and of course litter boxes!

While there are plenty of benefits to placing two litter boxes next to each other, it’s important to remember that in multi-cat households it’s more likely to be viewed as one little box location for your cats.

Of course, there are exceptions but it’s better to play it safe and avoid putting your cats in a position where they have to share since it’s definitely not one of their specialties.