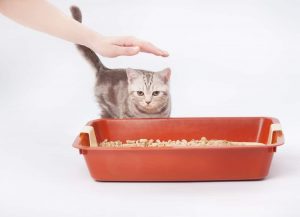 Our cats can do some very silly things when it comes to their litter box. While the most famous is the post-poop zoomies where your cat sprints full blast out of the box there are some more subtle, but equally strange, behaviors too.

Like when cats stare deeply at their litter box.

What’s going on here and why do cats stare at their litter box? Staring could be a response to some kind of litter box issue like the box being too dirty. Your cat could also be hesitant if they’ve recently had a painful or stressful bathroom break. But it could also just be normal cat behavior as it’s not unusual for cats to stare.

But let’s dive a little deeper and look at the reasons why our feline friends may take on this unusual behavior.

While all cats prefer a clean box, some cats can be quite picky and the definition of what’s considered “clean” will vary between felines.

When cats stare at the litter box, they may be completing their own assessment of just how clean the litter box is.  Not only visually, but they may also be taking the time to assess the smell of the box as well.

Just as staring can be a sign of hesitation for humans, it can be for cats as well. Not to be crude, but I’ve definitely stared down a Porta-Potty as I did the mental math to decide if it was worth the “adventure” of entering.

Your cat could be doing the same thing while just taking it all in.

It’s important for the litter box to be visually clean but the smell can be just as important. With a sense of smell that’s more than 14 times as strong as our own, clean means more than just looking clean. This can especially be problematic when it comes to hooded litter boxes that can sometimes trap in smells.

Make sure you’re cleaning the litter box regularly and looking for any connections between the cleanliness of the box and your cat’s staring habit.

If staring is related to hesitation with a dirty box at some point your cat may decide to take the matter into their own paws and urinate somewhere other than their box. Peeing on the bathroom rug is one of the more popular options but it could be anything in the house that’s soft…and clean!

Not only can regular scooping help, but adding an extra litter box can really help by giving your cat several clean bathroom options.

Reason Two: It Could Be A Medical Problem

Just as cats may be hesitant to enter a dirty litter box, starting could also indicate hesitancy as a result of a medical problem.

Feline lower urinary tract disease, which covers everything from bladder stones to urinary tract infections, could be causing your cat to have a painful peeing experience and could lead to some trepidation as cats begin to associate the litter box with pain. Again, your cat’s stare may indicate the mental math of figuring out if it’s worth entering.

Pay close attention to your cat’s outputs if you’re suddenly seeing them staring at the litter box. Many conditions related to feline lower urinary tract disease will cause your cat to use the litter box more frequently but also urinate in smaller amounts. If you’re using clay or clumping litter it can be easy to spot the very small spots of urine.

Any of these signs mean it’s time to contact your veterinarian and set up an exam.

An especially firm stool isn’t always a cause for concern as it can happen from time to time but if you’re ever unsure it’s always a good idea to consult your veterinarian.

Reason Three: Is It Safe?

Your cat’s deep stare could actually be them assessing the safety of the litter box.

To put it bluntly, pooping is one of the most vulnerable positions your cat can find themselves in and it shouldn’t be done without taking the proper precautions. While most cats feel comfortable just diving in, if the litter box is placed in a high-traffic or contentious area then there may be extra hesitation around it.

The type of litter box can also matter here. We might assume that our cats enjoy the privacy of a covered litter box, but this may actually increase the concern for our cats.

Our cats will instinctively be concerned with the fact that they have only one point of escape in a covered box and so they need to carefully assess the situation before entering. In some cases, that means staring.

Consider adding an additional litter box in a more secure area or try removing the hood and see if that changes your cat’s staring.

Reason Four: Did You Change Up The Litter Or The Box?

Did you recently switch up the litter? Or maybe you’ve introduced a new litter box?

Cats can be picky about their bathroom and even a subtle change in the litter or the litter box could be reason enough for a long inspection. I’ve had a few foster cats that hadn’t been exposed to wood pellet cat litter and they gave the box a long stare before making their way in.

But it doesn’t even have to be a new brand of litter or box to cause a stare. I’ve seen cats stare into the litter box anytime the litter was changed. It almost seems like their way to review the changes and inspect your work.

In other words, a change of just about any kind could get a cat to start staring.

Reason Five: Your Cat Could Be Guarding Their Turf

Cats are naturally territorial creatures and the instinct to take control of their turf is alive and well in your little house cat.

But feline territory doesn’t always work in the way that you’d expect. There’s usually no clear boundary that indicates the domain of one cat over another- at least not a boundary that we can easily understand.

Instead, the litter box could be considered the “territory” of one cat despite the hallway leading up to it being the turf of another. In these cases, some cats may stare at the litter box as a way of watching over their territory.

This is more likely to be the case if your cat is staring from a distance or across the room rather than standing directly in front of it. And if your cats are fighting over the litter box then there’s really no mystery that issues of territory are involved.

The best solution here is to add more litter boxes to your house and as a general rule, you should have the same number of litter boxes as cats plus one. So if you’ve got two cats, you’ll need three litter boxes.

Should You Worry About Your Cats Staring?

It’s normal for cats to stare and the fact that’s it’s directed towards a litter box isn’t always a sign of concern.

In some cases, we may feel that our cat’s stare is more intense than it is simply because our feline friends don’t blink nearly as often as we do. An unblinking gaze can certainly feel more serious.

But staring only becomes an issue when it’s combined with some other behavior. For example, cats that stare at their litter box and then urinate outside of it may have a medical problem or any number of issues with the state of the litter box.

So consider what else is going on with your cat and try to figure out the overall context of the staring behavior.

While it can be a little strange to see our feline friend staring deeply at their litter box it’s usually nothing to worry about. While you shouldn’t immediately write it off as just a silly cat behavior, if you’re able to rule out medical concerns, issues with the box, or conflicts with other cats then it’s likely just normal cat behavior.

Which reason for staring at the box makes the most sense for your feline friend?