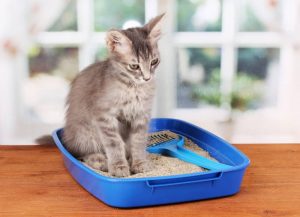 There can be a surprising number of scenarios where you may want to combine two types of cat litter.

Maybe you’re trying to the get benefits of clumping without the price by combining two types or you’re just trying to not let the leftover from the old brand go to waste. Combining two types of litter is actually a best practice when it comes to transitioning your cat to a new brand.

But does all this make sense and can you actually mix two different types of litter?

You can mix two different types of litter, including clumping and non-clumping but it isn’t something you should do long term. Cats prefer routine without a lot of surprises, especially when it comes to bathroom breaks, and you wouldn’t want your litter to always be just a little bit different.

Let’s talk a closer look at when mixing litter makes sense and when it doesn’t. But first, let’s consider the perspective of your feline friend.

What Does Your Cat Want From Their Litter?

After all, it’s just there for our cats to poop and pee on so how important could it really be?

For your cat, it’s extremely important! Cats are routine-driven creatures and there’s a long list of behaviors ranging from house soiling to excessive vocalizations that can all be traced back to changes in the household.

Big changes like a new spouse, house, or baby are obvious. But for our cats, smaller changes can have big impacts too including changes to the litter.

Cats need a consistent routine and if every time they go into their litter box it’s just a little bit different they aren’t going to be happy. That doesn’t mean every cat will start suffering from bad behavior but over time this inconsistency could lead to issues.

Most often, these issues will be related to urinating outside of the box as cats seek out a more consistent bathroom. That could be the nearest plastic bag or even the nearest laundry basket.

House soiling issues are some of the most frustrating feline behaviors to deal with so it’s generally better to just play it safe and stick with a litter that your cat likes!

It’s Difficult To Get The Perfect Mix

Remember, your cat wants consistency from their litter and their litter box. If you’re going to try mixing litter types you need a way to consistently pull off the same mixture.

If every “batch” is different then your cat could end up with litter box problems as your feline friends decide to a more consistent bathroom. Your cat will be paying attention to more than just the texture of the litter, and your cat’s powerful sense of smell will also impact whether the new mix gets their approval… or not.

So if you do try to mix litter, I recommend using a large container and mixing one entire bag with another so you’re able to get the same ratio every time. Still, that can be a lot of work and in most cases it just doesn’t make sense to mix litter.

But let’s look at a few of the specific combinations out there.

Can You Mix Clumping and Non-Clumping Litter?

It’s absolutely possible to mix clumping and non-clumping litter but the results may not be what you expect. While it would be amazing if you could create a litter that has the best of both worlds, in reality you usually get litter that’s not particularly good at anything.

That’s because clumping and non-clumping litter both have very different mechanisms of action.

When most people think of clumping litter they imagine the traditional clay types which use bentonite. When exposed to moisture, the bentonite clay expands and hardens forming a clump that you can easily scoop.

There are also other types of non-clay litters that still clump and you can even find wood pellet cat litter that clumps but the idea is still the same. Moisture gets absorbed, the material becomes firm and you scoop.

But when bentonite clay or any other clumping particles are too far from each other they can’t form a clump. Instead, you end up with several small balls or nothing at all.

Either way, scooping actually becomes more difficult instead of easier when you mix clumping and non-clumping.

Can You Mix Clumping and Crystal Litter?

The whole point of crystal litter is that it absorbs urine, neutralizes the odor, and then slowly evaporates the moisture so that it can start absorbing again. This leads to cat parents having to change the litter less frequently and improves the smell of the litter box.

But if you’ve got half crystal and half clumps then you’re going to have to dump the litter just as frequently since the clumping litter just doesn’t work the same way and usually requires more frequent changes.

Not only that, but the clumping litter won’t be able to do its job either and you’ll be left with several small clumps in the best-case scenario.

This is even more problematic if you’re using some kind of specialty crystal litter like Pretty Litter which is designed to change a certain color if your cat has a urinary issue. Because this is a premium litter, some folks may be tempted to mix it with a lower-cost clumping litter in order to cut down on costs.

But once it’s mixed the color changes will be inconsistent and much less clear compared to using it as the only litter. That completely defeats the purpose of using it in the first place!

Can You Mix Two Types Of Clumping Litter?

That will lead to a bad litter experience not only when it comes time to scoop but your cat probably won’t be very happy either.

There’s a huge range of clumping particle sizes with everything from super fine, almost sand-like litter to wood pellet litters that clump. On top of that, the mechanism of clumping can vary between brands with clay litter relying on bentonite clay and other brands relying on different particle structures and compounds to clump.

Mixing like with like may work but adding too much variety and you’ll likely end up with a mix of litter that doesn’t clump at all!

What About Mixing Two Types Of Non-Clumping Litter?

Of all the possible combinations, mixing two types of non-clumping litter will work the best in most cases. There’s no clumping mechanism to worry about and differences in particle sizes won’t make as much of an impact compared to other combinations.

Still, I wouldn’t recommend getting too crazy with your combinations. Not because you can’t but because the benefits of mixing something like wood pellets with non-clumping clay litter are pretty few and far between.

When Does Mixing Litter Make Sense?

We’ve talked a lot about why it’s rarely a good idea to mix two types of litter but what about times when it does make sense?

Let’s look at a few of the most common options.

When Transitioning To A New Brand of Litter

This is the most practical reason for mixing litter and while we’ve already talked a lot about how cats don’t like changes, a gradual adjustment to the litter box is usually better than a complete change overnight.

That’s why most experts suggest slowly adding the new litter to the litter box while steadily increasing the amount of the new brand. If done over a period of four to six days you can greatly reduce the impact that the litter change will have on your cat.

Ideally, you already have several litter boxes spread throughout the house so you don’t have to transition all litter boxes at the same time but even if you do decide to make the change across all boxes at once, slowly adjusting the mix usually works without a hitch.

Maybe you’ve got just a little leftover litter from your last brand and you don’t want it to go to waste.

Is it okay to mix litter then?

Well, it depends on how much of the old stuff you have and how different it is. But if it’s a small amount of litter, it’s unlikely to be a problem.

If you are going to go this route, I suggest putting the old stuff towards the bottom of the box. That way it will still contribute to the depth of the box, which most cats will appreciate, but won’t take a prominent position at the top of the pile.

You can also consider donating the litter as well. Most shelters will either use the litter themselves or make sure it gets to folks in need so it’s usually a great option.

Maybe you love the benefit of something like grass pellet litter but you aren’t a fan of the price.

Adding a similar litter like a wood pellet litter could be a good way to keep the cost down while still keeping the benefits of the grass pellets.

In other words, you could be adding a different type of litter as a sort of filler.

This can work as long as you’re able to get a consistent mix. Remember, cats are all about routine and if the litter is a little bit different every day then you may run into problems.

When You Want The Benefits of Both

Similar to above, maybe you love a brand of clay litter but the fragrance is just too strong for you. You could mix in a similar type of litter, or even one from the same brand, that’s fragrance-free. That way, you balance out the fragrance to find the perfect balance.

However, unless you’re also saving some cash with a setup like that, it’s probably a better idea to just find litter with a scent that you already like!

While mixing two different types of litters has a few applications, it usually doesn’t make sense.

Not only because it can be a hassle to do regularly but more important your cat just isn’t going to be a fan of constantly changing litter. When mixing litter, you should only do it for a short time or make sure you can get a consistent mix if done over a longer period of time.

But in most cases, it just isn’t worth the effort and with so many litter options out there you’re better off just finding a ready-to-go option that works for you and your feline friend!