Skip to Content
Written by Sarah Crothers in Behavior last updated March 2022
BetterWithCats.net may earn a small commission when you use one of the links on this page to purchase. 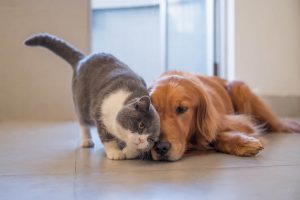 If you’re lucky enough to call both a cat and a dog family, then you’ve probably witnessed some interesting interactions between the two. Some are a little more unusual like cats that lick the dog or even knead them. But one of the most common behaviors between canines and felines is when cats rub against the dog. Some cats can be seen rubbing up against the dog’s muzzle, face, and body, and there are a variety of reasons behind why a cat might do this.

What’s going on here and why do cats rub against dogs?

In most cases, scent explains the behavior, and cats may rub against dogs to get more information about the smell of the dog or deposit their own scent on their canine roommate. Cats may also rub dogs as a way to say to greet them, to get attention, or to try and initiate play.

Below, we’ll look deeper into the possible reasons why your cat may be rubbing against your dog, as well as what the rubbing probably isn’t when it comes to the relationship between your cat and dog.

What's Inside show
Reason 1: It’s All About Territory and Smell for Your Cat
Your Cat May Be Transferring Her Scent To Your Dog
Your Cat May Be Trying to Say Something About Your Dog
Reason 2: As A Greeting
Reason 3: To Show Affection To Your Dog
Reason 4: The Dog Smells Interesting
Reason 5: To Get Attention
What Your Cat Rubbing Against Your Dog Probably Isn’t…
It’s Probably Not Dominance
It’s Probably Not the Cat Trying to Irritate the Dog
Closing Thoughts

Reason 1: It’s All About Territory and Smell for Your Cat

The most likely reason that your cat may be rubbing against your dog is probably related to scent and scent marking.

Cats can be very territorial creatures, and their interest in claiming other members of the household is enough for them to start rubbing against anything and everything…including your dog! Cats have scent glands on various parts of their body, including along their forehead, lips, chin, and the sides of their head.

Cats can make use of these scent glands by headbutting (or more officially called bunting), scratching, or even just rolling around on the ground. They can also transfer their scent just by laying in your lap.

These scent glands release pheromones that are undetectable to us but can easily convey one cat’s territory to another cat. When your cat rubs against your dog, he may be trying to claim the dog as his territory and to warn other cats to “back off” from what he considers his.

While your cat may feel that these pheromones are extremely important in letting everyone know that he considers the dog his, in reality only other cats are likely to respond to the pheromones. Another dog may find the smell interesting, but because dogs mark their territory in a different way, they will ignore the cat’s insistence that the dog belongs to him.

Your Cat May Be Transferring Her Scent To Your Dog

Rubbing against your dog could also be a way for the cat to transfer their scent onto the dog as an identifying marker. Cats have an extremely strong sense of smell and have over 200 million scent receptors in their nose. Transferring their scent to something else allows them to easily locate that object (or dog!) from anywhere in the household.

Scent is so important for cats, that a change in scent can even impact whether or not cats even recognize each other!

Transferring scents also allows cats to create a “group scent”. Contrary to popular belief, cats are not as independent as we once believed, and they often form communal groups. Other species, including dogs, can sometimes be included in these groups. When the cat rubs his head against your dog, he may be trying to include the dog as part of his group and indicate how comfortable he is with having the dog around.

Your Cat May Be Trying to Say Something About Your Dog

Your cat may be rubbing against your dog because he is trying to convey information to another cat, or even trying to tell your dog something. When your cat rubs against your dog, he is using the pheromones released from those scent glands to provide information. This information can include your cat’s current emotional state, her reproductive status, or even if she is feeling unwell.

While we humans can’t smell the pheromones, other cats can, and the pheromones are important when cats have urgent information to relay to their fellow feline friends. Dogs may also be able to pick up on the pheromones, though they might have a different meaning to dogs than they do to cats.

While cats and dogs can communicate with each other, a cat rubbing against the dog to communicate may be “lost in translation” to the dog.

Reason 2: As A Greeting

Cats may also rub against a dog as a way of greeting them. When cats are speaking with other non-human animals, they tend to communicate with their eyes, tails, and scent, so using a head rub as a way of greeting is probably not the main reason your cat is rubbing against your dog.

This greeting is most likely done in conjunction with transferring their scent onto the dog or asking for attention and affection, and a cat that is happy to see their canine friend may greet him with a brief rub and head butt.

Reason 3: To Show Affection To Your Dog

While cats do have a reputation for being fairly independent and standoff-ish, they can also be very affectionate. One of the most common ways a cat can show affection is with head butting (or “bunting”) and rubbing their head against whoever (or whatever) they like.

When your cat rubs her head against your dog, this could be a sign of affection towards the dog. While rubbing, it is likely that your cat will also gently head butt your dog, and you may notice other relaxed body language such as purring, partially closed eyes, or the cat may even begin to knead the dog with her paws.

All of this body language indicates that the cat is happy and content, and it is very likely that your cat is showing just how much she cares about your dog. Showing affection in this way also indicates how comfortable your cat is with your dog, and that he feels safe while in the company of Fido.

If the cat and dog were raised together, you might also see the cat rub up against the dog more frequently as a sign of affection and familiar comfort, and you may even see the dog respond in kind. While the dog may not really understand why he is rubbing as his head does not contain the same type of pheromone-producing scent glands in the same areas as his cat companion has, his attempts at communicating his affection towards the cat should be commended!

Considering that cats have an extremely strong sense of smell, it is unlikely that they would approach a dog and rub against him just to get a whiff of him. But if the dog was recently around something that smells interesting to the cat, then the cat may begin rubbing and sniffing the dog.

Cats have a special olfactory organ called the vomeronasal or Jacobson’s organ. Located on the roof of their mouth, this special organ is directly connected to the cat’s brain and allows a cat to recognize other cats and animals.

If your dog recently had a run in with another cat or something unusual smelling, then your cat may rub against him and utilize that special organ in their mouth to help identify who your dog was last hanging out with.

The use of this organ is often misinterpreted as a “stinky face” the cat is giving after he rubs and sniffs at something. Opening his mouth allows access to that Jacobson’s organ, allowing the cat to fully inhale and smell whatever it is that’s interested them and it can lead to some strange movements.

If the cat likes the smell, he may go back to rubbing against the dog. If the smell is something that the cat feels is a threat to his territory, he may also attempt to vigorously rub against the dog to place his scent and pheromones there rather than whatever was there previously.

Reason 5: To Get Attention

A cat who wants something tends to be very obvious in her body language and attempts to “tell” you what exactly it is that she needs. Rubbing against you or your dog is her way of trying to get your attention and to have her needs met, whether that be a good petting session, food, or playtime.

When your cat rubs against your dog, it could be that she’s seeking him out for the things she normally gets from you. Cats will also use rubbing to encourage a dog to play with them or even encourage the dog to start grooming and licking them by rubbing their face against the dog’s muzzle.

What Your Cat Rubbing Against Your Dog Probably Isn’t…

We’ve explained what is most likely motivating your cat but let’s also clarify what isn’t leading your cat to rub your dog.

Cats and dogs have different social behaviors, and as different species it is unlikely that the cat is even interested in asserting dominance over a dog (in her mind she probably already thinks of herself as the boss!) unless she feels threatened or that she needs to establish her territory in some way.

Social hierarchies in both species are very fluid and can change frequently day-to-day, and if the cat feels it needs to establish dominance over the dog it will probably do so in other ways.

Cats show dominant behavior towards other cats by swatting, hissing, pinning their ears back, and by blocking areas with their bodies to prevent another cat from entering. Rubbing against something (or someone) will transfer their scent but is not generally a way that cats attempt to show social dominance. So, if you see your cat rubbing against your dog, he is probably not trying to show the dog that he’s in charge.

It’s Probably Not the Cat Trying to Irritate the Dog

Cats who rub against a dog can sometimes take it too far by becoming over stimulated and being too rough in their affection and rubbing. This in turn can irritate a dog who has no interest in interacting with the cat at that time, but it is highly unlikely that the cat is doing it to purposely irritate the dog and it is just a side effect of the cat’s natural actions unnerving the dog in some way.

While it’s likely not an act of dominance or your cat being a jerk towards your dog, there are several likely reasons as to why your cat will rub against your dog. Cats will act this way towards a dog to transfer their scent, to obtain information on where the dog has been and who (or what) it has been interacting with, to show their affection, as a greeting, and to garner attention from the dog.

No matter the reasoning, if you catch your cat rubbing against your dog, rejoice in the fact that your feline and canine companions have a peaceful relationship!