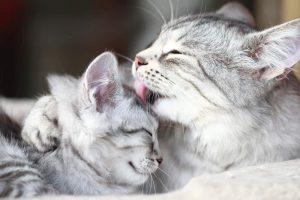 If you woke up and couldn’t remember your mom then it would be safe to say you’re dealing with some big problems!

But there’s a big difference between being raised by a parent for almost two decades and the rough and tumble life of a kitten. While they’re far more capable than we are at a young age, the average kitten in a shelter environment is being adopted at 2 months old.

If kittens are reunited with their mother years later when they’re adults, both cats will simply see each other as cats, and the fact that they’re relatives won’t be a factor. Instead, traditional feline social structures will determine whether they get along or not.

While that might be hard for humans to fully grasp, it makes sense when you consider the social structure of the domestic feline and how cats recognize each other.

We’ll explain everything you need to know but before you start reading, it’s worth taking a look at this quick video to see what a cat mother and cat son reunion really looks like:

Why Don’t Related Cats Remember Each Other?

Of course, there are limits to what we can really understand about the cat’s mind. That’s especially true when we consider the idea of remembering which is a subtle and often confusing concept.

When you consider how humans incorrectly remember things all the time, the idea of understanding what our cat can recall seems just about impossible.

Still, we do have some very important clues in the evolutionary history and social structures of cats.

While we know that our lovable feline friends are anything but antisocial, in the wild most species of cats, including the domestic house cat, will take control of large areas of land and live a mostly solitary existence. The big exception here are lions, which are one of the few social cats.

In the wild, there wouldn’t be a need to acknowledge familial relationships since cats would still need to take control of their own territory. Once kittens become adults, their mom would become a competitor and not a partner.

Contrast that to humans which are a deeply social species that depend on complex relationships to survive and you can see how hard it can be to understand a cat’s world.

In short, remembering their littermates or mothers doesn’t help the solitary feline survive and it hasn’t been critical from an evolutionary standpoint. Still, we can’t be 100% certain that they don’t have some distant memory or familiarity, especially depending on the age they were separated, but if that familiarity is there it’s not something that cats are acknowledging.

Not only does this apply to mother cats and kittens but it’s also true when it comes to whether or not male cats recognize their kittens.

How Do Cats Remember Each Other At All?

A cat’s sense of smell is roughly 14 times more powerful than our own and scent is a cat’s primary way of navigating the world. Understanding that scent is important to cats can help us understand many feline behaviors from why they love sleeping on suitcases to why they lick the shower curtain and everything in between.

But the big problem is that scents can change over time and this could explain why mothers don’t remember kittens and kittens may not remember their mother.

It’s easy to see how a kitten that’s nesting with his mom and littermates will smell very different as an adult inside a home of his own.

For a human comparison, imagine if someone you knew had their face completely changed years later…you probably wouldn’t remember them either! While we may recognize the familiar smell of a person, humans are much more visually focused and a completely different face would throw us for a loop.

Of course, it’s not helpful to anthropomorphize too much but that does help illustrate the point and give a chance to relate to what can feel like strange cat behavior.

Do Cats Remember Their Mother?

But because the social life of cats is so different from our own, we shouldn’t assume that they’ll have a relationship that’s better or worse with this cat because they’re related. Instead, it will just be like any other relationship with another cat.

We already mentioned how many kittens are separated from their mother as early as 8 weeks old, but there are plenty of scenarios where kittens can live with their mom into young adulthood and then may be reunited later.

In these cases, it’s certainly possible that former kittens will remember their mother. These cats have had more time to establish scent memories and form some kind of relationship with their mom. It’s also possible that like humans, kittens may not be able to remember things from before a certain age.

We don’t know for sure at what age cats will remember their mother or how long it takes for these memories to form but under the right circumstances, it’s certainly possible for cats to keep their memory of mom.

Do Mother Cats Remember Their Kittens?

It makes sense that a young kitten separated early from their mother wouldn’t remember her. This is something we can easily relate to since most of us are aware that there’s a lot we don’t remember from our earliest years.

But the other side of this question is a little harder to understand.

Why would a mother cat not remember their own kittens?

Again, it comes back to scent! Remember that cats identify each other based on their smell and not a specific look or face. That doesn’t mean that mother cats can’t recognize their kittens visually but after enough time has passed mother cats will turn to scent to recognize cats instead of just looks.

After years, or less in some cases, a cat’s scent may completely change leaving them unrecognizable to their own mother! At the risk of anthropomorphizing too much, it’s similar to the already mentioned idea of a person’s face completely changing years after you’ve seen them.

That doesn’t mean mother cats don’t love their kittens but as we’ve already explained as solitary creatures that typically don’t form groups which means that in the wild they’d rarely need to recognize related felines.

Time Is The Big Variable

Everything we’ve explained so far are rough guidelines that explain most situations.

But the big variable to consider here is time.

If cats are separated from each other for a week, it’s pretty likely that they’ll recognize each other. The same may be true for 10 days or 30 days.

What we don’t know is when cats will stop remembering. While time is the biggest explanation, major changes to a cat’s scent could decrease the amount of time it takes before cats fail to recognize each other.

We’re already pretty limited in our ability to evaluate feline memory so it’s almost impossible to imagine pinning down just how long it takes for cats to recognize or not recognize their family.

Should You Introduce Related Cats Differently?

It’s not an everyday occurrence but if you find yourself with a now adult cat and their long-lost mother should you introduce them any differently?

The best approach is to simply introduce cats to each other just as you normally would- carefully and deliberately.

With so many variables to consider and the inability to just ask our cats, the best option is to play it safe. You could certainly get lucky and a mother and kitten could still carry a similar familiar scent but it’s not something you want to assume.

Feline introductions are a big topic on their own but if you need a quick crash course check out this great video from Jackson Galaxy.

Do Kittens Miss Their Mother?

Based on what we’ve already covered, we shouldn’t expect kittens to miss their mother since they can’t exactly remember her in the first place!

As adults, cats may have behaviors like kneading and biting blankets that are informed by their kittenhood but these are probably not consciously or especially deliberate actions. Instead, these behaviors are somewhere closer to instinct.

But when they’re first separated from their mother, do kittens immediately miss their mother? Do they just assume we’re their new mother?

Kittens may look for their mother in her usual spot but that doesn’t mean they miss her in the same way that a human would. Especially if they’re separated at around 8 weeks old when kittens are eager to explore the world and almost immediately adapt to a life without their mother.

After more than a decade in shelter medicine, I’ve seen thousands and thousands of kittens leave their mother and I’ve never seen a single kitten that even looked like they missed their mom. Kittens are 100% in the moment and they’re not worried about their mother as much as they’re worried about having fun, sleeping, exploring and of course eating!

Do Mother Cats Miss Their Kittens?

Okay, so once again let’s look at the opposite scenario- will a mother cat miss her kittens?

This one can be a little more difficult to pin down. Some studies suggest that some non-human species suffer from postpartum depression which could be seen as a form of missing their kittens but if you look at this from a strictly scientific perspective it suddenly seems a lot less sentimental.

The Naked Scientist explains that “The main animals that have been looked at [for postpartum depression] are rats and mice, because they’ve mainly been used as laboratory models for humans and they do find that rats can show depressive symptoms, things like poor nursing, signs of stress and anxiety after birth.”

But this isn’t exactly a result of being sad and they go on to explain that “You can also manipulate the hormone levels in rats to bring on post-natal depression-type symptoms, and there’s some labs that are doing this and are trying to test interventions and ways to help reduce this, because it’s definitely thought that changing hormone levels – increases in cortisol, drops in females sex hormones – help to bring on this kind of problem.”

So if kittens are suddenly removed from their mother, cats may suffer some form of postpartum depression that can certainly seem like sadness related to missing their kittens. But with the hormonal cocktail that comes with pregnancy, it’s hard to say if it really counts as missing her kittens or not- at least in the way that humans think of it.

Motherhood can create many changes in cats and what was previously a laidback loving cat will suddenly have new priorities as they become focused on taking care of their little ones. After all, keeping kitten disciplined is hard work!

That means they’ll also show what could look like concern if her kittens are moved around or even handled too much.

In either of situations, we can’t say for sure that mom cats are missing their kittens in the same way that a human mom would but instead these reactions are heavily rooted in material instincts that drive our feline friends.

It can be hard to imagine the idea of not remembering your mother but when considering that kittens are often removed from their mother at only 2 months old it starts to be a little easier to wrap your head around the idea.

But when it comes to mom cats not remembering their kittens that’s where it gets pretty difficult to relate!

However, that’s only if you’re stuck trying to relate to cats on humans terms which is a surefire recipe for confusion!

Once we understand that, suddenly things don’t seem quite so strange!

What do you think? Have you had a feline family reunion that went differently than you expected?