Why do cats stare at nothing? Did your cat ever scare you, staring at nothing while you’re home alone? Me too!

This is not an uncommon thought since cats are known for strange behavior. This body language is trying to tell us something, but we are often left without any explanation.

Cats usually have their favorite space to lay and relax. Whether they’re trying to fall asleep or watching for the drama outside, there is a great chance you’ll catch your cat staring into nothing like hypnotized. But why do cats do that at all? Why does my cat stare at nothing?

Your cat maybe stares because she sees something that is invisible to a human eye, like a really, really small insect, or she is looking in the direction of a smell or a sound. However, cats may stare fixedly due to neurological issues or vision loss.

When a cat’s eyes notice something you are unable to see, I must admit, it can be odd and eerie. We may not know the exact reason why cats stare at nothing, but we found a few probable reasons for his cat behavior.

Why Do Cats Stare At Nothing?

You’ve probably asked this many times. This is especially scary if it happens in the middle of the night when you hear something. And guess what, your cat is looking in that direction…

Let’s see what it could be. 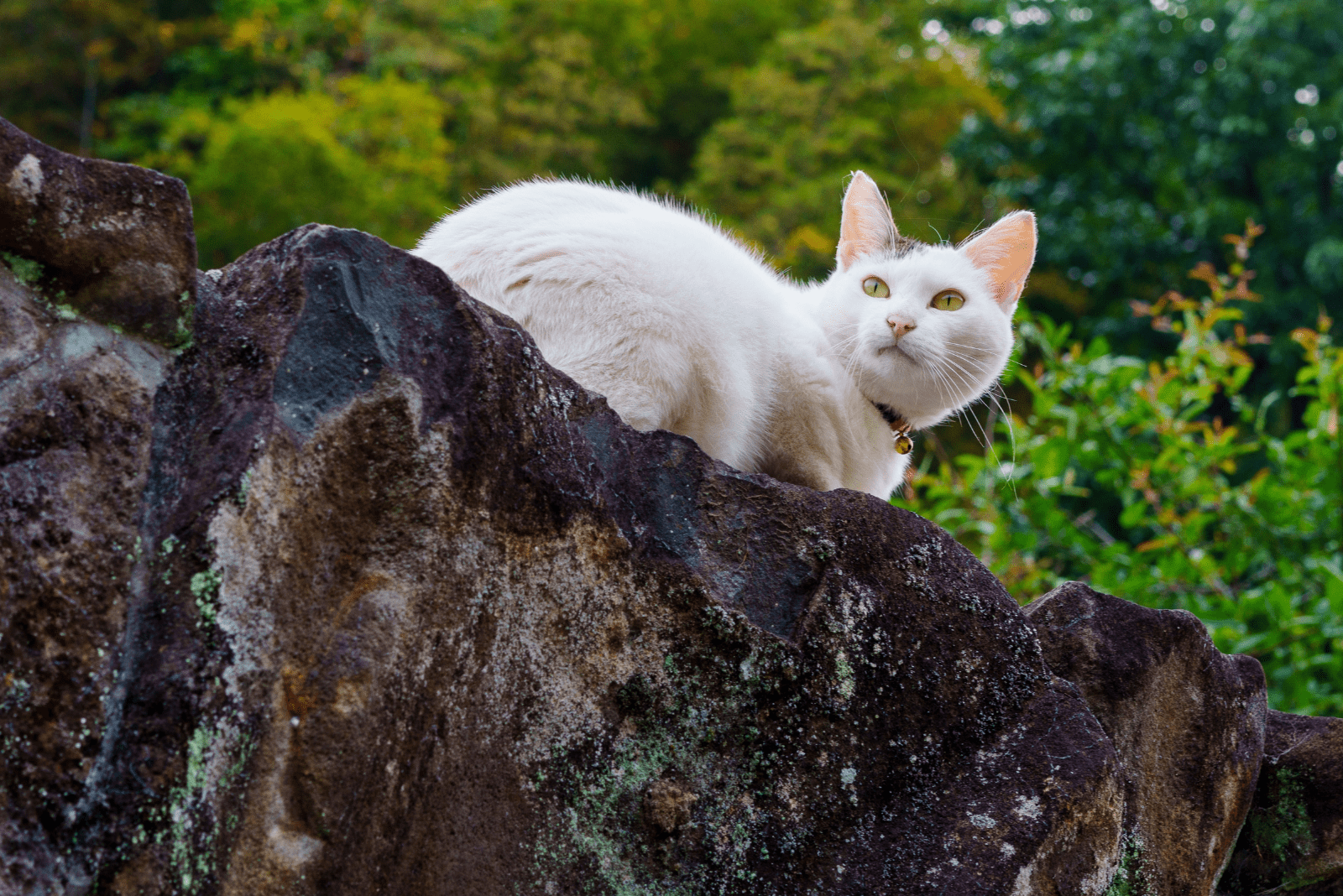 Why do cats stare at nothing – reason number one: A cat has consumed catnip.

The side effects of catnip are calmness and relaxation. Due to the chemical nepetalactone, oil in the catnip, cats are attracted, and it affects the cat’s sensory neurons.

When it enters the nasal cavity, your cat becomes euphoric, giving her a feeling like she’s flying. Cats may stare at nothing due to that, just like people stare at nothing after they consummate weed.

Why do cats stare at nothing – reason number two: If a cat is focused, she’s trying to see better.

Cats are known to have better vision than us; they might be staring at something in the dark while you don’t see anything. They have extraordinary night vision since the retina of your cat has cells called photoreceptors divided into cone and rod cells.

The amount of rod cells allows them to see in low light, unlike us, that don’t know a thing. Cats can notice the tiniest insects, so to us, it seems like they’re staring at nothing, but their perspective is totally different. Plus, their peripheral vision is magnificent; their vision can collect wavelengths of light that we humans can’t, like ultraviolet light.

RELATED: Why Does My Cat Stare At Me While I Sleep?

Why do cats stare at nothing – reason number three: Cats have episodic memory.

There is research that shows that even cats, like us humans, have episodic memory. What does it mean? It means the ability to remember a specific time episode, like your first day in school or your first bite of chocolate.

Their episodic memory may include remembering the sun reflection in the yard or some enjoyable memory or fun thing they did. They might stare into nothing while remembering pleasant memories for fun. This might be a good thing since it shows that they have a good memory and it works.

RELATED: Why Does My Cat Stare At Me Without Blinking?

Why do cats stare at nothing – reason number four: Cats have a sharp sense of hearing.

Cat’s senses are much sharper and better than ours. The hearing range of each cat is from 48 Hz up to 85 kHz; therefore, their ears are sensitive to sounds and any kind of noise. They are able to pick up a high frequency that we, humans, wouldn’t even notice, so that might be the reason they stare at nothing.

They might have heard something coming in that direction, but we cannot notice that. Cat’s stare will be prolonged until the sounds stop.

Why do cats stare at nothing – reason number five: Cat is just highly focused on something.

Cat parents are very well aware that these living beings have extreme curiosity, so it is not strange if they stare at nothing focused. Their eye or ear might catch something to us invisible and inaudible. It is not odd that they spend hours and hours looking at something, some bug or dust particles.

Why do cats stare at nothing – reason number six: A cat has a focal seizure.

For each cat owner, it is hard to face that their feline friend has some medical condition, but we must inform you that it is possible. One medical issue can cause your cat stares at nothing for long, and it is called a focal seizure.

The condition starts in the cerebral cortex causing cats to stare into space. These types of seizures attack only one side of the brain, and it is possible that your cat inherited it. Other signs besides staring at nothing are incoordination and drooling, so if you notice such things, take your cat to the vet immediately.

Why do cats stare at nothing – reason number seven: A cat has a medical condition called feline dysautonomia.

Long staring into nothing may indicate that a cat suffers from feline dysautonomia. It is a collection of conditions, including problems in the autonomous nervous system. It can affect cats of any age, but mainly it affects cats at a young age.

Other symptoms you can notice are gastric issues, loss of appetite, constipation, or diarrhea. Other problems include the effect on salivation, respiration, urination, heart rate, cat’s pupils, etc. You may notice that her breaths are difficult and labored.

Bear in mind that it will take time, almost a year, for a cat to recover and reach health after the condition is noticed. During this period, you need to watch out for many health problems.

What you may expect is nasogastric feeding and intravenous hydration for some time. Your cat will live a normal life if the condition isn’t severe, but if a kitten is affected by dysautonomia, it will need special care throughout its life. 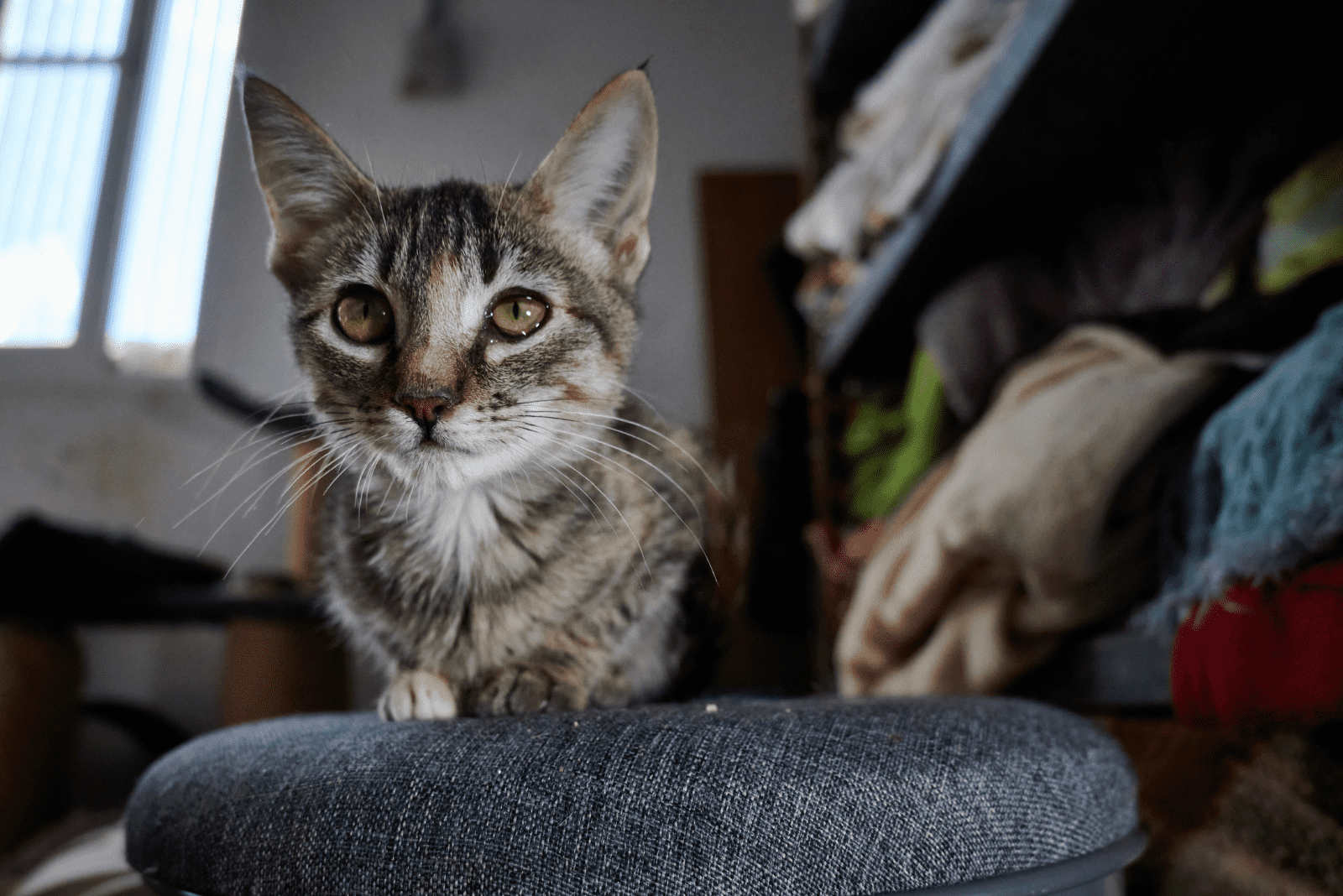 Why do cats stare at nothing – reason number eight: A cat has a condition called feline hyperesthesia.

This is not a common condition with cats, but it might be one of the reasons your cat stares at nothing. The signs of this condition are meowing loudly, manic distress and energy, sensitivity to touch, attacking own tail, and long stares at nothing.

What do those manic episodes look like? For example, the cat will attack her tail out of the blue, often aggressively like she’s trying to catch prey. Excessive grooming may happen, and she’ll probably howl loud to notify us that she’s stressed. You may also notice extended eye contact, which is often connected to aggression and dominance.

After the manic episode is over, a cat will stare for a long time into nothing in particular. You may notice that her gaze is blank and her pupils dilated, not reacting to movements around her. A cat with this condition will become sensitive to touch.

What is the reason behind this condition, I don’t know, but some studies say that this is one kind of obsessive-compulsive disorder, while some researchers say that it is a seizure disorder. Nevertheless, it is hard to watch your cat suffer.

Since the condition is a bit unclear, it may be challenging to establish treatment, and it is often a case of trying and trying. However, cats that suffer from hyperesthesia usually undergo treatments that reduce stress, and gladly they respond well to it.

Why do cats stare at nothing – reason number nine: A cat is observing something very carefully.

Cats are on the watch for 24 hours; they’re naturally curious and hunters. Since their ancestors were active during the night, domestic cats picked up those instincts. Since their vision is wider than ours, about 20 degrees, it looks like they’re staring at nothing, but they’re probably focused on something else.

Due to their excellent peripheral vision, they see little bugs and shadows that we cannot see even if we try.

Why do cats stare at nothing – reason number ten: Cat has feline cognitive dysfunction.

And the last probable reason for a cat staring at nothing may be a feline cognitive dysfunction. This is the condition that affects mainly older cats, and it is more known as cat dementia. This is similar to human dementia and senility. Cats with this condition may stare blank, confused, and yowl loudly.

Why Is My Cat Looking At Nothing And Meowing?

9 times out of 10, cats looking at nothing and meowing isn’t severe; we’ve learned that cats are curious and might be noticing something small or hearing a sound that the human ear cannot comprehend.

We must mention a head pressing which is when a cat, after a long stare, presses its head against the wall. This indicates that your cat has issues with the nervous system.

Other symptoms are behavioral changes, eye problems, and excessive circling. If these are the symptoms you notice in your cat, a vet check-up is a must!

Why do cats stare at nothing? I hope this question is well explained throughout our article. It is most likely that your cat is just curious and has no serious medical condition, but we needed to inform you about those few serious possibilities. If there are symptoms that look unusual and alarming, you know what to do.

It is in the cat’s brain that they observe everything in every moment. If your cat often stares at nothing, maybe she needs more playtime and wants to play with her owner.

• Why Does My Cat Stare At The Litter Box

• Cat Poop Color Chart – What Does Each Color Indicate?