Skip to Content
Written by Logan M. in Behavior last updated September 2022
BetterWithCats.net may earn a small commission when you use one of the links on this page to purchase. 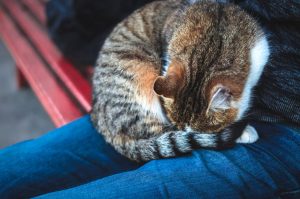 Our cats are well known for coming up with some of the most creative and sometimes elaborate sleeping positions around.

I regularly find my cat napping in positions that I could have never thought up on my own. Of course, she still likes to work in some of the classic positions and will simply curl up into a little ball from time to time.

The curled cat ball is a classic for a reason and she’s far from the only feline to do it.

But why do cats curl up into a ball to sleep?

Curling up into a ball before a nap is an extremely efficient way for cats to sleep. Not only does it help conserve heat and keep cats warm, but it also helps reduce the risk of an attack by making cats harder to spot and protecting vulnerable areas like their stomach.

Of course, cats may also just find the curled up position to be quite comfortable so there doesn’t always have to be a deeper evolutionary reason behind it.

Let’s take a closer look at this adorable feline sleeping strategy by reviewing 4 reasons why cats choose to curl up into a ball before they sleep.

Reason 1: Curling Up Is Comfortable and Instinctual

While it might not be the most scientific answer, many cats may choose to curl up before sleeping simply because it’s a comfortable position!

Just as some people prefer to sleep on their back, stomach or side some cats may have a preference for the curled up position.

For many cats, curling up into a ball is the “default” sleeping position as a result of thousands of years of instincts. In other words, cats may not have much of a reason at all for why they curl up into a ball and simply do it without thinking.

I know, that’s not a very deep answer but the next several reasons will help explain why this behavior has likely become part of a cat’s hardwiring in the first place.

Reason 2: Curling Up In A Ball Keeps Cats Warm

Cats have an average body temperature between 101.0 to 102.5° F which is quite a bit warmer than the average human temperature of 98.6° F. That means cats may need to do a little extra work to keep a comfortable temperature and curling up into a ball for naptime can be a great way to reduce heat loss and improve insulation.

The search for warmth explains why cats love so many interesting sleeping locations like laps, backpacks, and even inside cat carriers!

Cats are far from the only animals to do this and most folks have seen a dog perform their elaborate and time-consuming circling routine before taking a nap. Like cats, dogs are also seeking warmth (along with protection) with a curled up sleeping position.

But our familiar pets aren’t the only animals to do this and conserving warmth influences everything from a flamingo’s one-legged sleeping position to the curled up ball that just about every other mammal uses for a nap.

You might be surprised to hear that your cat’s sleeping position could be a way to protect them from potential predators.

After all, what does your little housecat have to worry about in the comfort of your shared home?

Well, your cat probably instead consciously thinking of predators but instead, your feline friend’s natural instincts drive them to curl up into a ball which protects their vital organs from a potential ambush.

Your cat’s most vulnerable spot is their stomach. Like us, their rib cage doesn’t protect this area despite the fact that there are important vital organs inside. By curling up into a ball, cats can help shield their soft stomachs during their most exposed (and favorite activity): sleep.

This is pretty much the opposite of a cat that decides to sleep on their back which is a classic sign of a comfortable feline that isn’t afraid to let it all hang out. That doesn’t mean cats that curl up to sleep are feeling threatened, though it could be part of it, it’s more often explained by thousands of years of evolution that encourage cats to protect their vulnerable tummies without a second thought.

In some cases, curling up into a ball to sleep is simply the best way to sleep wherever a cat wants to be.

And we all know, that if cats want to take a nap in a strange or weird location, they’ll find a way to make it work.

Just check out this handsome feline that finds himself curled up into a ball in a bowl:

When it comes to cat beds and many cat trees, curling up into a ball is also the most practical way to taking a snooze since the shape of many cat furniture is round.

The Curled Up Position Isn’t Related To Illness

I’ve seen some folks suggest that cats may curl up into a ball to sleep because they don’t feel well but this doesn’t really hold up in practice.

It’s something that may feel true to us because the idea of curling up in the fetal position is a very clear sign of discomfort for humans.

But this doesn’t translate to cats.

In most cases, a cat that’s suffering from a severe illness will sit upright with their head hanging and generally appear less alert overall. This is confirmed by the folks at Vet Street along with my decade of experience in the veterinary field.

Of course, many sick cats will curl up into a ball but it’s not specifically because they’re sick and just as many healthy cats will also take on this sleeping position. So seeing your feline friend curled up in a ball isn’t a clear sign of illness and generally nothing to worry about.

Instead, look for more reliable signs of illness like avoiding food, social interactions, or a decrease in affectionate behavior. If you’re ever unsure, consult your veterinarian but a curled-up cat all on its own isn’t a sure sign of illness.

There you have it!

What may seem like a simple sleeping position is actually a practical way for cats to not only stay warm but also protect their very vulnerable tummy. But in other cases, this is a partial approach to fitting in their favorite space or even more simply it could be a feline’s favorite position.

What do you think? What reason best explains why your cat likes to curl up in a ball before nap time?