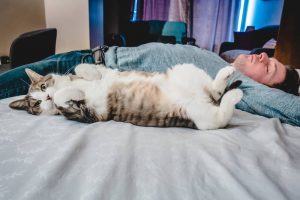 I’m of the opinion that when it comes to sleeping positions, our cats are true artists. They regularly take on some of the most amazing and weird positions. Sometimes they simply try to find the perfect spot in the sun. Other times, they seem to be perfectly adapting to whatever they’re laying on.

Many of these unique sleeping positions give the world clear signals about how that particular feline is feeling and inquisitive cat parents have spent a lot of time wondering why their cat sleeps the way they do.

But one of the most interesting and intriguing sleeping positions is when cats lay completely belly up!

What’s going here and why do some cats sleep on their back?

Let’s take a closer look at what’s going here with some possible explanations for why cats take on this strange sleeping position!

There’s really no question about this one- if your cat is sleeping on their back then they feel comfortable, calm, and secure with you.

Veterinarian Georgina Ushi-Phillips summarizes this perfectly when she explains “Your cat’s belly is the most vulnerable part of their body. There’s not a lot of protection there but it’s also where your cat’s vital organs are housed. So when cats expose their belly, whether that’s by sleeping on their side or back, they’re letting the world know that they feel very comfortable! You should feel proud that your cat feels so safe and cozy!”

Seeing your cat passed out and belly up should not only make you smile because it’s almost unbearably cute, but also because it’s clear that your cat is more than comfortable in your home. It really is an honor but it’s something that we can often take for granted.

However, I can tell you that after fostering hundreds of cats, the first time I find my feline house guest laying out with their belly up, I feel warm and fuzzy knowing that they’re starting to settle in.

So don’t forget to take a moment to appreciate your cat’s belly-up position and what it means for you and your home!

I know that I can’t resist giving my cat a pet when she takes on the belly-up position and she also seems to know that flopping down in front of me is a great way to get attention.

So sleeping on her back is like a powerful combination of the attention-getting flop and staying comfortable with a nap.

But you might think that your cat wouldn’t want to get attention while they’re sleeping similar to how we wouldn’t want to be woken up in the middle night- even it meant we were going to get some positive attention.

However, cats don’t quite sleep the same way we do. Instead of several hours of dedicated and concentrated sleep like us, cats have a light sleep throughout the day. As Dr. Ushi-Phillips explains, “Compared to humans, cats are much more alert while they sleep. You’ve probably noticed your cat relaxing and sleeping with their eyes partially open. This goes back to their wild instinct which requires them to stay alert!”

In other words, just because your cat appears to be sleeping, doesn’t mean they’re completely unconscious or that they wouldn’t want to be pet!

In some cases, cats are looking for a very specific type of attention in the form of belly rubs. Of course, not all cats like belly rubs but many actually love them, and sleeping belly up is a great way to get them!

It’s important to be careful here!

Not only is the exposed belly often a trap that leads to scratches but the tummy is also a very vulnerable part of your cat. If your cat really is in a deeper sleep, they could find it pretty startling to wake up to a vigorous belly rub!

So first make sure that your cat actually likes belly rubs and don’t assume that every cat on their back wants you to rub their tummy! But if you know for certain that your cat loves them, then by all means rub that belly!

Doesn’t your cat look comfortable all stretched out?

I’m honestly a little jealous sometimes when I see just how deep of a stretch my cat is able to get while I’m stuck over here doing yoga!

We already know that cats are no stranger to stretching and they especially seem to love getting a nice spinal stretch. As the folks at Feliway point out, part of the reason that cats scratch is to get a stretch in! They explain, “Do you like to stretch when you wake up in the morning? Your cat certainly does! When cats scratch, they stretch out their back, legs and paws.”

When you look at a cat that’s sleeping on their back, the position is actually pretty similar to using a vertical scratcher!

It’s also possible that over time some cats just develop a preference for sleeping on their back as opposed to other positions. While I don’t want to anthropomorphize too much, I greatly prefer sleeping on my side. So much so that if I try to sleep on my back it just feels weird! While most cats don’t seem to have a problem with any particular sleeping position, they could start to prefer lounging on their back over time!

5. To Keep Cool Or Stay Warm

Cats will often fold or tuck their paws under their body in order to preserve heat but the opposite is also true and when cats sleep on their back with their legs stretched they may be cooling off.

By opening up their body, cats can increase the amount of body heat that’s lost. It’s pretty much the opposite of trying to huddle into a small ball which is one of the best ways to conserve body heat.

But despite the effectiveness of cooling cats off, some felines may actually use the same belly-up sleeping position to keep warm too!

I know that may seem a bit contradictory. But we know that cats love spending time in the sun and soaking up all those warm rays. We’ve all seen cats perfectly positioned to collect the maximum amount of sunshine but on sunny days when the rays are plentiful, some cats may decide to take a nap on their back and get as much sun as possible.

Some cats may actually be doing both at once! They want to soak up all the sun without getting too hot and taking a snooze with their back down and belly up can be a great way to do both!

Is It Leftover Kitten Behavior?

However, I don’t think it’s a solid enough reason to be listed as anything other than an honorable mention but let’s look closer as the idea behind it.

Kittens can’t urinate on their own until they’re around 3 weeks of age. Before that time, the mom cat or human caretaker has to “stimulate” the kitten by rubbing their hind end.  Momma cats will use their tongue to get the job done and you can see exactly what this looks like here:

Notice how the kitten falls over in the process and ends up just hanging out on their back?

The argument is that kittens find this position relaxing and so they continue to lay on their back. The problem with this, is that we’re assuming the kitten is really processing what’s happening. As you can see in the video, the kitten is just walking around doing kitten stuff. They seem to categorize their mom as doing “momma cat stuff” and they try to keep walking until they can’t.

In other words, I don’t think the specific position of laying on the back has that much significance for kittens. I’ve been around thousands of kittens with moms and just as many without and I’ve never seen a kitten that rolled on their back in preparation of being stimulated. At two weeks old, they just aren’t aware of what’s going on.

Not only that, but most kittens are pretty annoyed when they’re being stimulated. Whether it’s a rough cat tongue or a wet cloth, the process doesn’t seem all that fun for kittens.

So do cats lay on their back to relive the best parts of their kittenhood? Probably not.

Yes, you’re right about that but that’s only applicable when cats are actually awake!

The belly up position allows your cat to place all five of their most important weapons in prime position to attack. That’s also why many people fall into the belly rub trap and get four claws and a cat mouth on their arm!

But your cat would never sleep in this position as a way to stay ready for an attack. Instead, a more defensive sleeping position would have your cat wrapped up tightly in a way that protects them from surprise attacks during their most vulnerable activity.

Do Pregnant Cats Lay On Their Backs?

No, pregnant cats are less likely to sleep on their back than other cats. Laying on their back would put the entire weight of all their kittens directly on them while sleeping on their side will balance out the weight and give the momma cat some much needed relief.

The same true for humans and most experts actually recommend that human moms avoid sleeping on their back! Cats don’t need an expert to tell them that this position is uncomfortable and you’re very unlikely to see a pregnant mom sleeping on her back.

Do Cats In Heat Sleep On Their Back?

Cats that are in heat aren’t likely to sleep on thier back either. Female cats in heat will most certainly spend some time flipping, rolling and flopping around which will include some time on thier back but they won’t be sleeping.

In fact, one of the most frustrating parts about cats in heat is that they don’t sleep much at all! Instead, they’re making a ton of noise with their butt in the air to attract a mate.

If we could ask our cats why they sleep on their back, their answer might actually be “why not”?

While there are plenty of logical reasons to explain this cute cat behavior, it might be that simple for some of our cats!

Which reason do you think makes the most sense for your cat? Are they soaking up the rays or waiting for a belly rub?