Skip to Content
Written by Logan Michael in Cat Behavior last updated February 2022
BetterWithCats.net may earn a small commission when you use one of the links on this page to purchase. 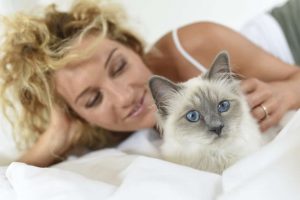 If you think your cat smells really good…you’re not alone. If you look around the internet for even a few minutes you’ll find droves of cat parents who all agree that their cat smells surprisingly good!

Of course, smelling good is relative and while my cat Debbie does smell good she doesn’t smell like a fresh pot of coffee or chocolate chip cookies. Instead, she smells mostly neutral but fresh. And it’s certainly a good smell!

I’d expect a lot of people are comparing the smell of cats to dogs and in that case, cats are the clear winner.

But why do cats smell good? Cats smell good thanks to their habit of constantly grooming so they stay clean and odor-free. Their special barbed tongue does a great job cleaning their coat and this habit has likely helped their wild ancestor sneak up on prey without being given away by their smell.

But as always, let’s go a little deeper and learn more about why our cats might smell so good.

What's Inside show
Reason 1: Cats Spend A Lot Of Time Grooming
Reason 2: Smelling Good Is Important To Your Cat’s Survival
Reason 3: Your Cat’s Diet Can Help Them Smell Good
Reason 4: You Might Be A Bit Biased
Reason 5: Maybe Your House Smells Good (And So Your Cat Does, Too)
Conclusion

But it’s not just time invested that keeps your cat clean and smelling fresh, cat tongues also have a tongue that’s perfect for grooming thanks to a carpet of sharp, hollow spines called papillae. These sharps spines act like a brush that helps remove chunks of loose hair, dirt and other debris from your cat’s fur.

Think of it like a built-in wet brush that your cat is pretty much obsessed with using!

Reason 2: Smelling Good Is Important To Your Cat’s Survival

In the wild, cats are uniquely positioned as both predator and prey. So while they’re out hunting small mammals and birds they also need to be careful not to become the prey of a larger predator!

But what does this have to do with smelling good?

Cats don’t want to smell too strongly since it could mean that their scent would be picked up by a predator or their next meal. Unlike dogs, cats are ambush predators which means they need to be able to wait patiently to surprise their prey. It also means that smelling like a dead fish might be a giveaway to an unsuspecting mouse.

If you’ve seen dogs and cats play with a toy you’ve definitely seen the difference between ambush predators and pack hunters. Think about the classic kitty “butt wiggle” before they pounce! Cats take their time to identify their prey and perfectly plan their attack. That’s also why it’s so common for kitties to hide around corners or under beds and go for your ankles when you least expect it!

But when you throw a ball for a dog, they just go right for it! That’s the difference between an ambush predator and a pack hunter like a dog!

If you aren’t already familiar with the feline pounce (and the associated butt wiggle) check out this video:

Cats also have to avoid predators which means having a strong smell that predators can quickly pick up is going to be a problem. Cats are solo hunters which means it’s not important for other cats to identify them by their scent. Compare that dogs which have to prioritize communication with their canine friends over stealth.

But keeping their coat clean isn’t the only way that cats hide their scent. LiveScience points out that “Wild cats will also hide their waste to avoid attracting unwanted attention from predators to themselves or their nest of kittens”

That’s why using a litterbox and hiding their stool comes naturally to kittens, even without much training.

Reason 3: Your Cat’s Diet Can Help Them Smell Good

Most dogs are willing to eat a lot of gross things and if they aren’t eating them then they’re trying desperately to roll around in them. My childhood dog would seek out dead fish along the coast and do everything she could to try and roll in it.

Compared to that, I’m sure any cat would smell good!

Cats on the other hand are specialized carnivores that do a good job digesting one thing really well: meat. So while dogs are doing their best to play garbage disposal your cat is typically sticking to her diet. And while some foods can certainly cause smelly poops or poor coats if you’re feeding your cat a healthy diet of digestible animal proteins there’s a good chance they’ll smell good as a result.

It’s possible that the reason your cat smells so good is that you’re just a little biased. We all know that people have a scent and often times the scent of someone we love is comforting, reassuring, and calming. Our little furry, feline friends are no different. The smell of their clean coats can be calming and reassuring and since it’s usually combined with the scents of our own home there’s a good chance we think it smells good!

Reason 5: Maybe Your House Smells Good (And So Your Cat Does, Too)

Cats already do a great job keeping their coat clean and free of any stinky smells. All that’s left to do is add a fragrance and then you’ve got a super clean smelling cat! So it’s entirely possible that your cat smells neutral but when you consider that they’re spending 16 hours a day sleeping in the softest placest they can find (like your clean sheets) it’s no surprise that they end up smelling like a summer breeze!

This is especially true if you have an indoor-only cat. Cats that don’t go outside are only exposed to the clean scents in your home. Dogs, on the other hand, have to go outside to use the restroom several times a day exposing them to all kinds of elements. I know that my little chihuahua is so low to the ground that the fur on her belly is constantly collecting all kinds of dirt and debris.

I can also tell you that she certainly isn’t spending 5 hours a day trying to clean it up!

Cats do smell good and you’re not the only one that thinks that! But it isn’t just the result of dumb luck or a natural disposition to smelling good. Instead, cats are basically working a part-time job to keep themselves smelling clean and fresh while their full-time job is sleeping on your fresh laundry. This all comes together to create a kitty cat that just plain smells good!