Skip to Content
Written by Logan Michael in Behavior last updated July 2022
BetterWithCats.net may earn a small commission when you use one of the links on this page to purchase. 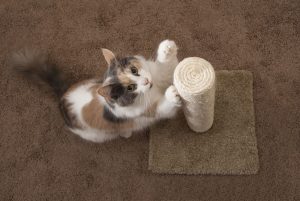 We know that all cats need scratching posts to keep their claws sharp, mark their territory and get a good stretch.

But do you know exactly how a scratching post helps keep claws sharp? After all, if you were going to sharpen a knife you’d use another metal surface to do it and certainly not a soft couch or cat tree.

So what’s going on here and do scratching posts sharpen or actually dull a cat’s nails?

That may seem a little confusing at first, especially when you consider that scratching posts are one of the most popular and effective alternatives to declawing but let’s take a closer look at what’s going here and why scratching is a lot more than just a way for cats to sharpen their claws.

Basic Anatomy Of A Cat’s Claw

In order to understand how the scratching process impacts a cat’s claw, we need to get some basic anatomy out of the way. Unlike our own nail, a cat’s claw grows directly off the bone and forms more of a three-dimensional shape- at least compared to the simple and flat structure of our own nails.

While you already knew this, it’s probably not something you gave much thought to. But that three-dimensional shape is also the secret to sharper claws since it allows a cat’s nail to grow in layers, one on top of another.

You can’t see the layers with the naked eye, at least most of the time, but if you’ve most certainly seen a claw sheath around the main areas that your cat likes to scratch. This video shows a great example of what this looks like:

So instead of sharpening the existing claw, what cats are really doing is removing the exterior-most layer of the claw to reveal a sharper layer underneath.

This is pretty amazing when you think about it and very different from how our own nails work! Cats essentially have a conveyer belt of sharp claws ready to go while we’re stuck with just one little ole’ nail!

Soft is, of course, a relative term but a cat’s favorite scratching areas are certainly soft compared to metal or granite surfaces which are typically used to sharpen things in the human world.

But now that we know how the layers of a cat’s claw work, it should be clear why soft is a preferred surface- in order to remove that top layer, cats need something that they can, literally, dig their claws into. A harder surface would only dull the claw and compared to something like your couch, a harder surface wouldn’t be as effective at removing the top layer of the nail.

Carpet, couches, cat trees, and scratching posts, on the other hand, are perfect for striping that top layer to reveal the new sharp layer below. In the wild, a tree can work too but something very hard like metal just wouldn’t work.

Remember, cats have a very different nail shape from our own. When we think of trimming our own nails, we’re talking about a flat surface. But when it comes to cat claws there’s a 3-D shape to consider which makes a big difference.

When scratching posts remove the top layer, and reveal a sharper claw underneath, they also shorter the overall claw. It’s not exactly what you would call a trim, but it can leave the claw shorter and therefore more manageable than it was before.

So How Do Scratching Posts Protect Furniture?

Scratching posts aren’t keeping claws dull but instead, they’re designed to offer cats an appropriate alternative to furniture. On top of that, removing the top layer of the nail not only helps keep claws sharp but as we just mentioned, also keeps them from getting too long.

When claws are too long, cats will have trouble retracting them and get their claws stuck on furniture or carpet just by walking. Of course, scratching posts don’t completely replace the need to trim your cat’s claws but they do help. So even though most cats don’t exactly love having their nails trimmed or even having their paws touched, nail trims are still a required part of feline care!

Do Cats Scratch Only To Sharpen Their Claws?

Scratching posts do much more for cats than just sharpen their claws. Scratching is also how cats claim territory and this is such an important part of being a cat that even declawed cats need scratching posts!

When cats scratch, not only do they visibly mark their territory with their claws but they also leave their scent via special glands in their paws (cats also have these scent glands on their face and head).

Cats want to claim the best territory so they usually prefer to scratch areas that have the most interesting social scents. Much to the frustration of most cat parents, that usually means areas like the living room which not only have scents from most people in the house but also have the best materials for scratching. That’s why it’s important to appropriately place scratching posts in socially important areas and not hidden in the garage or other areas.

Additionally, scratching gives cats a chance to get a full-body stretch and practice a little feline yoga.

Because scratching is about so much more than just keeping claws sharp, it’s important to remember that even with trimming your cat will still want to scratch. So while nail trims are part of protecting furniture and keeping a cat healthy, don’t expect to ever stop your cat from scratching!

So scratching is a lot more than just keeping claws sharp and healthy!

It may seem a bit unintuitive at first, but those scratching posts aren’t keeping your cat’s claws dull at all!

Instead, they’re keeping cat claws sharp but despite the contradictory sound of that, they’re still a great tool for managing excessive scratching of furniture. Cats are hardwired to scratch and as you’ve seen this simple behavior does a whole heck of a lot for cats!

What do you think? Were you surprised to hear that cats have a conveyer belt of sharp claws ready to go?