Skip to Content
Written by Marina Titova in Behavior last updated May 2022
BetterWithCats.net may earn a small commission when you use one of the links on this page to purchase. 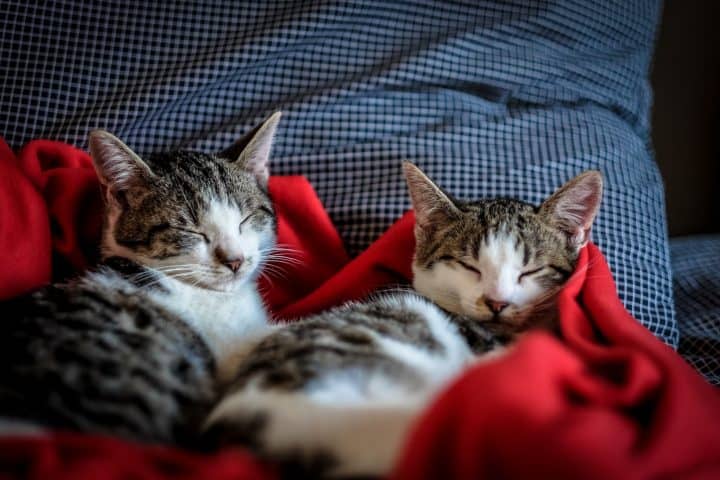 You truly have to wonder at the contradictory nature of cats!

They can be social creatures but prefer to hunt alone. Some might never want to share you with another cat, while others enjoy the company of their fellow felines.

What’s even more remarkable is that some cats are capable of creating strong bonds with each other that can last for life!

But how can you tell if cats are bonded? Once a pair of cats develop a strong bond, they become dependent on each other and they’ll spend the majority of their time together. They usually show their affection, by grooming each other, playing, sleeping, and lounging together. Bonded cats view their companionship as a source of comfort.

There are ways to tell if two cats are bonded, and together with my fur babies, we made a list to guide you through them.

Let’s get right into it, shall we?

Can Cats Bond With Other Cats?

Some people might argue that dogs are better than cats as they seem to be more social, while kitties love to be left alone. Well, contrary to many popular beliefs, cats aren’t solitary creatures. In fact, some studies indicate that cats are social animals that, in feral conditions, live in groups consisting mainly of queens and their litter. The size of these groups depends on their hunting resources and not on their social skills.

The same study also explains that during a cat’s socialization period the exposure to other cats, animals, and people will determine their relationship to them. This means that if a kitten didn’t come in contact with other cats or humans, for the first three months of its life, it’ll most likely associate strangers with danger.

If kittens, on the other hand, grow up in a friendly environment where they interact with other cats, they can definitely create bonds. This shows that cats are very flexible when it comes to companionship and that they’re capable of creating friendships. Of course, Dr. Dantas points out that it also depends on the individual cat.

Signs That Your Cats Are Bonded

Whether you adopted a pair of kittens from your local shelter or you brought a second cat into your home, the signs of two bonded cats aren’t easily missed. There are of course cats that can live in the same household and simply co-exist, but there are also cats that simply can’t get enough of each other. If you find your cat snuggled up, grooming each other and sharing that little spot of sunshine there’s a good chance they’re bonded!

When Do Cats Become Bonded?

Cats usually develop strong bonds when they’re kittens. According to Marilyn Krieger, Certified Cat Behavior Consultant, “for most kittens, the way they learn social skills is by interacting and playing with each other.”

Adopting litter mates usually results in a strong connection, but this doesn’t mean that two kittens from separate litters can’t be bonded. Their first interaction might end up in baby hisses, but that shouldn’t last long.

Introducing older cats might be challenging, but it’s not impossible! It might also depend on their character compatibility. If an older shy cat is introduced to a very social and domineering, there is a chance that the shy cat will end up feeling anxious.

It’s important to remember that cats are individuals, and they might not get along with every cat out there. The process of bonding matured cats could take longer, and it might also demand a great deal of effort on your side. As a cat owner, you’ll have to draw boundaries between the two cats and help them create that magical bond. Benefits Of Having Bonded Cats

Whether you’re thinking of getting a second cat or a bonded pair it’s important to consider the effect this choice will have on your life and your kitty’s life. Cats do bring joy whether they come in pairs or if they’re by themselves, but they could also bring major change.

How Long Does It Take For Cats To Bond?

Usually, cats that are from the same litter are bonded from the beginning of their lives. It of course makes sense that two siblings share a strong bond. Kittens that have been raised together could have a similar kind of attachment because their characters are still flexible, and they have a high tolerance for one another.

Grown cats on the other hand may take a while to like each other. If you want to adopt two grown cats, perhaps ask your local shelter if they have bonded pairs. It often happens that some cats might develop a strong connection to each other during their stay at the shelter.

Just check out this video with these two lovely foster friends! How adorable are they?

If on the other hand, you already have a cat and would like to get them a companion, a kitten might be a good choice for you. As mentioned before, kittens are flexible and they’re not intimidating. It also should be easier to control any fighting that might occur between a kitten and a grown cat.

Before choosing a new cat or kitten make sure their personalities are easy to match. Be patient when introducing them. Remember that each cat is unique and there’s no set time frame to introducing two cats. It could take a week or even months before they even get to tolerate each other’s presence.

Just like two people in love can have disagreements, so can bonded cats. Usually, such fights come and go, leaving no hard feelings behind. The common reason behind cat-fights is territorial or it could simply be a play-time gone wrong.

Since our feline overlords tend to have their claimed spots around the house it’s important to maintain an equilibrium. Some cats like high places and some prefer closed spaces and soft beds. According to Maria Grazia Calore, a Veterinary Surgeon, these spaces are part of a cat’s field of isolation, where they rest. It’s important that each cat has its own cat-bed and cat-tree, so they don’t end up fighting over one spot.

There are ways to reduce fighting or any kind of hostilities. Any rough play can potentially escalate to a real fight, so it’s important that you don’t let them fight it off. Instead, calmly separate them from each other, or distract them by some positive play instead. If you find your cats suddenly fighting, perhaps take them for a vet check-up. According to Cornell University, College of Veterinary Medicine, cats can show aggressive behavior when in pain.

What Happens If You Separate Bonded Cats?

Bonded cats are like soulmates. They seek comfort and affection from one another, and when one of them is gone it means that they lose their safety net. I’ve noticed that any time one of my cats is taken to the vet the other one is just crying his heart out by the door.

The most common reason for two bonded pairs to be separated is the passing of one of them. As heartwrenching as it might be for a cat owner, it’s also a struggle for your cat. There’s a great chance that your cat might experience depression. It’s really important to give your cat more attention, to make them feel less abandoned during those times.

Be aware of signs like the loss of appetite. They might also avoid playing or interacting with you. Some mourning kitties spend most of their day sleeping. They might vocalize their pain by crying at the door or where they feel their cat-buddies scent is the strongest. With separation, cats lose the most important part of their communication. That’s why there’s a possibility your cat will become clingy or in some other cases more reclusive.

They could also develop obsessive behaviors like extreme grooming or excessive scratching to cope with the loss of their cat-buddy. So, make sure you spend time with your cat. Buy their favorite treats, show them affection, and spend a good amount of time playing with them.

Who knew that cats could develop such strong feelings for one another?

Of course, as cat parents, we know how loving our little furballs can be. One slow blink is enough to reassure us, but there are a lot of signs that show if cats are bonded to each other.

I remember the struggle to introduce my cats, but I’ll never forget the first time they fell asleep next to each other!

Let us know if you’re a happy parent of a bonded pair and how do your furballs display their affection?