Skip to content
Written by Logan Michael in Cat Behavior last updated August 2022
BetterWithCats.net may earn a small commission when you use one of the links on this page to purchase. 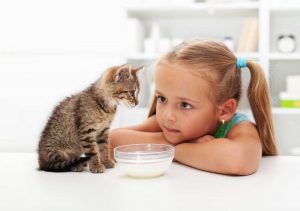 Every morning I wake up to an absolutely ravenous little cat. She’s meowing, pacing, pawing, and letting me any way she can that it’s time to go downstairs and start eating.

But here’s the thing…

When we get downstairs to her food bowl, it’s already got fresh kibble in it and she simply starts eating her breakfast! She didn’t need me to give her the food, she just wanted an audience!

So why does my cat want me to watch her eat? My cat is a social eater (sometimes called an “affection eater”) that loves my company while she eats. While other cats may feel safer if you’re around when their face is in a food bowl.

But let’s dive a little deeper and take a closer look at why some cats don’t like to eat alone.

Reason 1: Your Cat Is A Social Eater

When we look at how cats act in the wild, they’re certainly anything but social when it comes to eating. Cats are territorial creatures and will fiercely defend their space from other cats. But domestication and petting sessions can change a lot of behaviors.

So while the idea of a cat being a social eater in the wild would be scoffed at, after more than 10 years in one of the largest shelters in the US I can tell you that I have seen hundreds of cats that would be described as social eaters or affection eaters.

Sadly, many cats stop eating when they become ill with an upper respiratory infection or any number of other illnesses. But one of the most important and simplest strategies we could use to get cats eating again was spending some time with them while encouraging them to eat. That included petting of course but also pushing around their kibble or shaking their food bowl lightly. While rare, some cats would only eat if someone was actually watching them.

Petting cats to get them to eat was so important, that we actually had a huge group of volunteers who’s entire role was to go around and give extra attention to our social eaters!

So while it may not make much biological sense, I’m not the only one saying this.

The San Francisco SPCA has an entire handout on what they call affection eaters!

Other cats don’t actually want any actual petting, but they’ll still only eat when you watch! While that might still fall into the category of the social eater, your cat might also just want some backup while she eats!

Remember, your cat hasn’t been domesticated for very long (at least in an evolutionary sense) and their wild instincts are still very much alive! They’re still hardwired to avoid dangerous situations or vulnerable positions and the typical food bowl is pressed right up against the wall. Sometimes even in a corner. That means your cat has to put her back to the entire world just to grab a bite to eat!

While it might not look like your cat is worried about predators as they sleep for 16 hours a day, in the wild your cat is both predator and prey which puts them in quite an interesting position. In the wild, your cat would do her best to avoid placing her face against a wall where she can’t hear or see nearly as well.

Having you around for meal time might make your cat feel more comfortable.

Reason 3: Your Cat Doesn’t Want To Miss Anything

The last reason why your cat might not want to eat unless your watching is because she doesn’t want to miss anything! Some cats really love to be in the middle of all the action…or even the potential action. If your cat has their face in the middle of a food bowl, they won’t be able to see what you’re doing and what’s going. Even worse, they could miss the perfect opportunity to attack your hair or play with a crinkly piece of paper you’re trying to write on!

My cat Debbie is definitely a social eater but I really think she just doesn’t want to miss anything. She knows there’s food in the bowl but she wants me around to eat it. Her food bowl is in the kitchen and after I’m done eating my own breakfast she’s quick to follow me back up the stairs to see what’s happening next.

While it’s kinda cute to think about your cat not wanting to miss any of the household action. Or even the idea of a cat that can’t bear to eat unless they’re being pet, it can actually be a bit of a pain. And while it should be obvious, if your cat goes any length of time while not eating you should immediately consult your veterinarian. Anorexia in cats can have huge consequences and it should never be taken lightly.

But if your cat is healthy and happy but insists that you watch her eat, you do have some options.

I’ve written pretty extensively on the best place to put your cat’s water bowl, but it’s also important to consider the best place for your cat’s food bowl too. If your cat needs an audience to eat, consider placing the food bowl in a more high traffic area that’s more convenient for your morning routine. Often times, food bowls are placed in out of the way or remote locations in the house like the laundry room.

Instead, try somewhere like the kitchen or even your room. If you’re worried about making a mess from putting your food bowl in a more unusual location, I highly recommend these budget-friendly food mats from Amazon. They do a good job making food doesn’t get spilled all over the place by keeping it on the mat.

Most happy, healthy cats in a home aren’t completely refusing to eat unless they’re watched. Instead, it’s a very strong preference for not wanting to eat alone. So you could keep your main food bowl in its current location and add a second smaller food bowl somewhere that is easier to watch your cat. I really like this Americat stainless steel food bowl on Amazon. They’re small enough to fit just about anywhere but easy to keep clean since they’re stainless steel.

The best second food bowl location would probably be the bathroom, but just make sure the food it kept somewhere that it won’t be exposed to moisture from showers.

Move The Bowl Away From The Wall

As we discussed in reason 2, some cats might want you around to watch their back before they decide to eat. While it might not be a major fear for them, they might just feel more comfortable with you watching while they eat. One way to make these cats feel more comfortable is by giving them room to check out their surroundings instead of having to face the wall. If your cat is frequently checking around for you or pausing to listen give this simple adjustment a try.

Try giving your cat a chance to eat while in a higher-up position in the home. This might make your cat feel a little more comfortable since many cats naturally like an elevated perch where they can get a better sense of what’s going on around them.

The most obvious choice would be a countertop but that’s not something that will make sense for everyone. Instead, you could check out a cat tree where your cat can happily eat with a full view of their domestic domain. I’ve written about the best price cat trees with free shipping in this article if you need some ideas.

Hopefully, you understand a little more about why your cat wants you around for mealtime.

What reason do you think makes the most sense for your cat?

While my cat Debbie might have a little of all three motivations, she certainly doesn’t want to miss anything!

If you are here, you’re probably a cat owner and a big fan of large cats like the Maine Coon. It is evident that a large cat will eat a looot, and these gentle giants have earned their title as...