Skip to Content
Written by Logan Michael in Behavior last updated May 2022
BetterWithCats.net may earn a small commission when you use one of the links on this page to purchase. 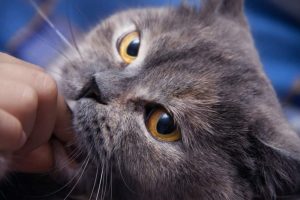 Headbutting is one of my favorite cat behaviors and despite its aggressive-sounding name (human headbutts aren’t exactly cute) this feline behavior is usually a sign of love and affection.

But things can get confusing when cats start adding on some other behaviors like licking or biting at the end of their headbutt.

Does this mean that the headbutt is a sign of aggression? Why do cats headbutt then bite?

When cats headbutt then bite they’re either getting a little too enthusiastic about spreading their scent or they’re trying to communicate something. It could be affection and love, a request to play, or they could be asking for a meal but the context will help you figure out what your cat wants.

Let’s take a closer look at 5 reasons to explain this strange and sometimes frustrating feline behavior.

Reason 1: Your Cat Is Marking Their Territory

While there are several meanings behind the feline headbutt, the primary purpose is for a cat to spread their scent and place pheromones on important objects, people, or other cats.

For some cats, the bite or nibble after the headbutt may be a natural extension of their scent marking. Headbutting typically leads to cheek rubbing which can often include a little teeth. Some cats take things a little too far and vigorous check rubbing can turn into a bite.

Veterinarian and feline specialist Michele Gaspar explains this further when she writes that “Cats who mouth or love bite their humans are taking this type of marking behavior to a more extreme position, if you will.”

In other words, your cat may be getting just a little too excited about sharing their scent with you and a nibble seems like a natural next step for your feline friend.

Reason 2: It Could Be A Love Bite

I can still remember when I first heard the phrase “love bite”.

I was around 8 years old and my cat bit my hand. I then immediately told my mom about it (I guess I wasn’t very tough) and she said that it was just a love bite.

This told me that cats really did have it all figured as they’d convinced humans to take their aggression as love!

But the feline love bite is a real thing- so how is it connected to headbutting?

Well, headbutting isn’t just for marking scents. Cats will also headbutt people or other pets that they care about. Headbutting and rubbing is a common way for cats to greet felines that they’re closely bonded with.

For younger cats, you can add biting and nibbling into the mix too.

Dr. Karen Becker explains that young cats and especially kittens nip and nibble each other affectionately but that their skin is also much tougher than ours. Because our cats generally seem to view us as other cats, they don’t seem to realize that our skin just isn’t that tough and these bites hurt!

We saw something similar when we looked at the reasons why cats lick then bite people. It seems that in both scenarios, cats are starting with a sign of affection, licking or headbutting, and taking things one step further to biting.

Reason 3: Your Cat Could Be Overstimulated

If you’re actively petting your cat while they headbutt and then eventually bite you, then those chomps could be related to overstimulation.

The SPCA explains that overstimulation is a response to being pet or handled in areas that cats find uncomfortable or, more commonly, petting that has gone on for too long.

Most people know that belly rubs are a trap (even though some cats do genuinely love them) and there are some spots that cats just don’t want to be touched. But the fact that overstimulation can occur after too much petting can sometimes be surprising to people.

Many cats are great at simply walking away before they become overstimulated but other cats struggle to pull this off or simply shift from happy to overstimulated too quickly.

These bites can also be harder than a love bite since cats are essentially saying, “Hey, I’ve had enough!” and will add more pressure to get their point across.

Overstimulation almost always requires petting so if your cat bites you after headbutting and you’re not petting them, then overstimulation probably isn’t the explanation.

If overstimulation is the cause, you’ll also notice some changes in body language as cats will become tenser. The folks at Maddie’s Fund explain that signs of overstimulation include “tail swishing, skin twitching over the back, flattening of the ears, tenseness, dilated pupils, low growl, walking away and lying down.”

Some of those behaviors, like lying down, can feel a little vague which is why it’s important to look at the overall shift in behavior. If your cat goes from headbutting their heart out to suddenly plopping down on the ground, you may be dealing with the start of overstimulation. In that case,  it isn’t laying down on it’s that’s your signal but the transition from headbutt to laying down.

Cat expert Jackson Galaxy also has a great video overstimulation and a deeper breakdown of the signs to look for which you can see here:

As soon as you see any of these signs, it’s time to stop petting. Not only will that keep your cat happy but it will also prevent a chomp in the future.

Reason 4: Your Cat Wants To Play!

For some cats, biting is their go-to way to initiate a play session and it can be completely normal for them to turn a headbutting session into playtime by giving you a little nibble.

Of course, this isn’t exactly ideal feline behavior even if it does sometimes work for your cat.

If you regularly use your hand to play with your cat, then there’s a good chance that initiating playtime is a likely explanation for the post headbutt bite. That’s also one of many reasons why it’s not recommended to use your hand as a toy with your cat.

When you consider this from your cat’s perspective it suddenly seems pretty simple. A hand becomes something that both pets and plays. If you want the hand to pet you, try headbutting it. If you want it to play, try biting it.

Certainly simple, but not great for you!

Instead, focus on toys for playtime and don’t let a post-headbutt bite turn into a play session since which will only further encourage the behavior.

Reason 5: Your Cat Is Doubling Down On Their Message

Cats could use a bite immediately after headbutting to let you know that they’re serious about whatever it is they’re trying to communicate.

For example, if your cat is headbutting your hand in an effort to get pet but the petting doesn’t happen (possibly because it’s 3:00 AM and you’re dead asleep) they may decide that a little chomp is in order.

The same thing could be true if your cat is hungry and headbutting you an effort to let you know it’s mealtime. When the headbutts don’t work, they could turn into a bite to get the message across.

What Should You Do If Your Cat Bites Your After Headbutting?

While some people may find it a little cute when a cat nibbles after headbutting, full-on biting is a different story.

It may work for you and your cat but you want to raise a feline friend that can get along with people other than you too.

Every one of our explanations above involves cats either trying to communicate something or get something they want- and sometimes both. Whether it’s communicating love or asking to be pet, the headbutting and biting combo seems like the best approach for some cats.

In order to discourage the behavior, you’ll want to show cats that it’s not the best choice for getting what they want. The easiest way to do this is to simply walk away and withdraw your attention.

For example, let’s say your cat wants to be pet. They decide to first headbutt you and when that doesn’t work they bite. If you then pet your cat, or give them any positive interaction, you’re encouraging the behavior.

A better reaction is to simply walk away immediately after the bite. This lets your cat know that biting results in the opposite of what they want- which is your attention.

I know that’s a simple example but it really can be that straightforward!

Take a close look at what you do after your cat headbutts and bites. If it’s anything positive then you’re encouraging the behavior.

Headbutting is cute…but biting afterward isn’t quite so cute.

In most cases, cats use the bite after the headbutt to take the original message a step further. Whether that’s a love bite, an attempt to start a play session, or a request for food sometimes cats feel they need to bite to get the point across.

But if you understand what your cat is trying to tell you, you can also give them a variety of tools to communicate without turning to biting!

What do you think? What reason do you think best explains your cat’s headbutting into biting behavior?