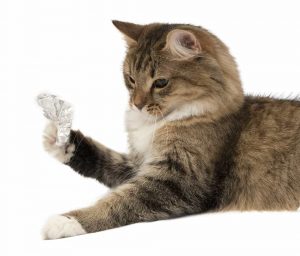 Our cats seem curious about almost everything but there are still some things that they distinctly do not like…including aluminum foil.

But why do (most) cats hate aluminum foil?

It might not seem like much to our human ears but the sound of aluminum foil is likely the biggest reason why cats hate it. With powerful ultrasonic hearing, cats hear a lot more from the crinkling of aluminum foil than we do. The strange texture and reflectiveness are also likely factors.

Let’s take a closer look at each reason why cats hate aluminum foil starting with the most likely explanation.

When foil crinkles it makes a very high-pitched sound. In fact, it’s so high pitched that it’s actually considered ultrasonic which is any sound above 20,000 hertz. It’s also well out of the range of what a human can hear.

But what about our cats, can they hear ultrasonic sounds?

They’re pretty much experts when it comes to high-pitched or ultrasonic sounds so they’re really getting the full foil experience! That should be no surprise when you consider that mice and many other rodents use ultrasonic sound to communicate with each other. In other words, your cat evolved to hear the sounds that their main prey makes!

At first, you might think that cats would like the sound of foil since it’s at least a little similar to the sound of mice but there seems to be something about the ultrasonic sound of foil that’s uncomfortable, grating or at the very least startling to a cat’s ears.

While we can’t say for sure exactly what foil sounds like to our cats, we can be positive that with the ability to hear a huge range of frequencies, they’re experiencing a lot more than we are.

At first, you might think foil would be right up a cat’s alley. After all, most cats absolutely love anything crinkly, and while foil is crinkly if you ball it up when it’s stretched out as a sheet and it can be pretty strange.

The combination of smooth surfaces, rough edges, and the occasional ridge is just plain weird. Then there’s the movement that foil makes and every time you touch one spot- not only is there a strange ultrasonic sound but some other spot pops up too!

In many cases, folks will lay aluminum foil on the floor as a way to deter cats. I don’t know about you, but if I walked into a room that had mirrors as flooring I’d be pretty confused too!

Even if it isn’t used as flooring, the reflective properties can be confusing to cats.

While we can’t ask our cats exactly how they’re interpreting the foil, some folks have suggested that felines see the foil as water primarily because of the reflective qualities of foil. That’s certainly possible but I’d argue it’s pretty unlikely.

As veterinarian Megan McCorkle explains, “Cats can’t recognize their own reflection, but they can certainly see that there’s another cat. Like many animals, cats rely heavily on their sense of smell which is 9 to 16 times stronger than a human’s and they can tell that the cat in the reflection doesn’t smell like a cat.”

Not only are cats a bit aloof about their own reflection but more importantly, their powerful sense of smell will allow them to immediately figure out the difference between water and foil- reflective or not.

But that doesn’t mean the reflectiveness of aluminum foil isn’t a reason for cats to be afraid or uncomfortable around it. Even if they probably don’t think it’s water, there are few things in your cat’s world that both reflect and move like aluminum foil. That unusual combination alone is enough for cats to be hesitant.

It’s probably not just one reason why cats are afraid of aluminum foil and instead it’s likey a combination of all the properties that make foil strange.

Which makes sense when you consider the evolutionary value of being afraid!

Sometimes it can seem like our curious cats are completely without fear, but if they were truly not afraid of anything they probably wouldn’t have made it this far. Being afraid is an important part of evolution for all species.

We talked about this when we explained why cats are afraid of balloons and the same idea applies here: aluminum foil breaks all the rules of the natural world that your cat is used to so it makes sense for cats to be at least a little hesitant.

There’s are also the surprise factor! A quick search on Youtube will pull up hundreds of videos being startled by foil placed in unusual places. So not only is foil strange to begin with but it’s often unexpectedly presented to our feline friends.

Do All Cats Hate Aluminium Foil?

Far from it! Just like anything else, you’ll find cats on both sides. However, most cats will at least be hesitant when they encounter foil for the first time. The combination of strange sounds, textures, and unusual reflective qualities are too much to just charge right in.

But once cats start to see that the foil isn’t a real threat, it becomes time to explore.

Is Aluminium Foil Safe For Cats?

Foil is generally safe but can present some risks for certain cats.

A 2015 study found that the noise of foil and other ultrasonic sounds can actually cause seizures in cats. The previously undiscovered condition is called feline audiogenic reflex seizures (FARS). A variety of high-pitched sounds were connected to seizures and aluminum foil was the most common trigger by far.

However, the condition was most often found in cats that were 15 years or older and it’s almost unheard of in younger felines. The condition is quite rare, even in older cats, and most cat parents will never need to worry.

But do the results of the study suggest that the sound of aluminum foil hurts cats?

Not necessarily. Just because there’s the possibility of an abnormal response to foil doesn’t mean that the experience for all cats is unpleasant. However, it does drive home the point that we just don’t experience the same sounds as our cat so we should be careful to not make the sound of foil too loud or intense. That same advice applies to any ultrasonic sound including things like dog whistles which cats can also hear.

There are hundreds of thousands of cats that are happy to play with foil balls and don’t seem to care at all about the sound which suggests that while the sound is probably strange, not every cat finds it unpleasant.

Besides the sound of foil, the only other risks come in the form of sharp edges. If you’re making foil balls for your cats, just make sure that there aren’t any pointy edges that could cut or injury your cat.

Does Aluminium  Foil Work As A Cat Deterrent?

You may have heard people suggest aluminum foil as a cat deterrent for keeping felines off counters and this can work in some cases.

However, it wouldn’t be my first suggestion mainly because not every cat will be deterred by foil after the first several encounters with it. As we’ve discussed, besides the sound of foil (which isn’t going to change) much of the hesitation around foil comes from the fact that it’s so unusual.

But cats will get over that. Especially if it means they can jump on the counter or protest a closed door.

Instead, I suggest something like double-sided tape to deter cats. Not only is it easier on the budget, but cats are unlikely to ever get used to the annoyance of having something sticky on their feet. Just make sure you pick up something cat-friendly and you can check out my favorite brand on Amazon by clicking here.

The other reason I prefer something like the sticky tape option is that the effect is much more relatable. I don’t have ultrasonic hearing so I can’t even comprehend how cats hear foil but I do know that having sticky stuff on my feet is annoying.

But you didn’t need me to tell you that since there are hundreds of feline reaction videos across social media! When it comes to why cats hate aluminum foil the biggest factors are likely the sound and surprise.

Watch any of those videos and you’ll notice that in most cases cats are caught completely off guard by an extremely unusual material. But we’ve also seen that many cats will quickly figure out that foil isn’t any kind of real threat and then it’s time to play!

Where does your cat fall in terms of foil fears? Are they are afraid of foil or do they see it as just another toy?