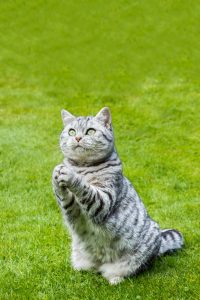 We’ve talked about a lot of feline behaviors here and while some of them have been pretty weird, describing them is usually straightforward. Cats may be licking everything or giving you a deep stare but either way, it’s easy to explain to someone else what you’re seeing.

But one behavior that’s not so easy to explain is when cats make what seems like a praying or begging motion with their paws. What exactly is going here? Have our cats become suddenly devout or is this just the latest technique to get an extra snack?

Why do cats make a praying or begging motion with their paws?

Most of the time, cats make the praying or begging movement in order to get your attention. As soon as cats make this movement once, they’re likely to get plenty of positive reinforcement and praise from their owner for such unusual behavior. Cats may continue this movement because it feels good or calms them down.

Those are the most likely explanations but they’re far from the only ones so let’s look a little closer at the best reasons to explain this weird feline behavior.

But first, let’s make sure we’re on the same page with what this behavior really looks like.

What's Inside show
What (Exactly) Do We Mean By Praying Or Begging?
6 Reasons Why Cats Beg Or Pray With Their Paws
Reason 1: Your Cat Wants Your Attention
Reason 2: You’ve Encouraged It
Reason 3: For Balance
Reason 4: It’s A Good Stretch
Reason 5: It’s Soothing
Reason 6: It’s Your Cat’s Happy Dance!
Your Cat Probably Isn’t Praying
And It Probably Isn’t An Aggressive Pose
Should You Every Worry?
Closing Thoughts

What (Exactly) Do We Mean By Praying Or Begging?

This cat is a great example of the praying/begging motion and it’s almost always accompanied by the up and down motion that you see here:

6 Reasons Why Cats Beg Or Pray With Their Paws

I usually pride myself on bringing our readers the best and most well-researched cat content on the web. I read the studies, talk to veterinarians and leverage my decade of veterinary experience.

But in this case, I’m stumped.

This specific paw movement hasn’t been researched…at all.  Everyone I’ve spoken to, including a handful of veterinarians, are stumped too. We’ve come up with some reasonable explanations but there doesn’t appear to be one reason that applies to all cats.

Your best bet for figuring out why your cat is doing this is to look at context clues that I’ll include with each explanation.

Now let’s get into it.

Reason 1: Your Cat Wants Your Attention

But it’s probably not just about attention and your cat likely wants something from you as well. That could be food, petting, getting picked up, or just about anything else. Whatever your cat needs, they don’t feel like they’re getting it and they turn to the begging or praying movement to let you know.

As far as how this starts, that’s where things get unclear but if you break down the behavior into the individual parts, it might not seem as foreign as it appears at first.

It’s not the most common behavior, but cats will stand up on their hind legs in order to get a better view and occasionally as part of a fight. Cats are also very paw-focused and not afraid to bat everything in sight. While the praying/begging motion is far from a swat, it could be seen as a movement somewhere between using a scratching post and pawing at something.

The point of all that is simply to say that the individual movement isn’t entirely out of the ordinary for cats.

That means it’s not completely unreasonable to imagine a cat just giving this movement a try when they’re trying to your attention. Even better, they quickly see that it works pretty darn well and most folks will pay attention to a cat that’s vigorously praying at them!

So if your cat is praying/begging, consider what they might want. If you’re moving towards their food bowl then it should be obvious that your cat really is begging. But your cat may also be asking for petting or play sessions too.

Closely related to the drive for attention, the first time cats do this movement in front of their owner they’ll quickly get plenty of positive reinforcement in the form of petting, verbal praise, and just general attention.

You can live with cats your entire life and never have a cat that does this so this behavior tends to get a strong reaction from anyone!

Felines will quickly figure out that all it takes for your undivided attention is a silly begging/praying motion and for your cat that’s a good enough reason to keep going. If you provide your cat with any food after then that will only further reinforce the behavior.

It’s not that uncommon for cats to stand on their hind limbs, but that doesn’t mean they’re particularly stable in that position, and the praying or begging paw movement could be a way for cats to maintain balance in a strange position.

The concept is similar to why humans extend their arms on either side of them when trying to balance. This motion helps us balance and it’s possible that cats do it for the same reason- at least at first.

Cats could be trying to stand up on their hind legs to get your attention and flapping their arms, prayer-style, helps them keep that position. Over time, the behavior may get reinforced by your positive reinforcement or our next reason.

As with any other creature, stretching feels good for cats!

Stretching is one of the reasons that cats like to use scratching posts (or furniture) and even though it’s not the primary reason for the behavior it certainly helps.

The praying or begging paw movement could be similar and cats may find that after they do it for balance or your attention that it feels good too. That could be enough for some cats to keep doing it.

However, I don’t think this explains why cats start the behavior but it could help explain why some cats keeping doing it. Especially cats that make this movement with no one else, human or feline, in the room.

Even though the behavior may not look comforting, the repetitive nature of it may be soothing for cats. Studies have found that repetitive movements like pacing can be calming for both people and animals.

That still might sound like a stretch but for the cat in the video below, it could sound a lot more likely when you consider that they’re making the begging or praying motion even when they’re alone:

But that doesn’t mean this cat is stressed!

Just like the action of purring can help cats feel calm or taking a warm bath can relax humans, stress isn’t a requirement for this behavior since they have benefits all on their own.

We’re taking a cue from the canine world here as small dogs seem to love making the praying and begging motion when they’re especially excited. For some small dogs, this happens all the time and it’s not uncommon to see them prancing around with their paws bouncing up and down.

It’s certainly less common in cats, who are much more capable of keeping their cool, but it’s still possible that your cat’s begging or praying movement is their way of showing some excitement.

Excitement doesn’t have to make sense, just look at the zoomies for a clear example of that. Still, because it’s the most unlikely single explanation I did add this to the bottom of the list.

Now I’m not here to get into a debate on spirituality but if our cats were to show their devotion to a higher power, I have to believe they would choose a more graceful approach than this to pull it off.

While folks will commonly describe this behavior as praying if you saw a human mimicking the same behavior you probably wouldn’t come to the conclusion that they were praying. In fact, the behavior could look downright menacing with paws or hands flapping up and down.

If our cats were going to communicate with the divine, I think they’d find another way to do it instead of something that looks this silly!

And It Probably Isn’t An Aggressive Pose

You certainly could make the argument that this behavior is related to an aggressive or defensive stance.

After all, we know that many animals make efforts to puff up or stand on their hind legs in order to appear larger.

But as soon as you see a cat actually make this movement suddenly all that logic goes out the window.

There’s really nothing that appears defensive or aggressive about the begging or praying paw movement. In fact, by placing their paws together and moving them up and down cats are placing their best weapons in inefficient spots.

So while the upright position could be the sign of the aggressive or defensive cat, if it’s combined with the praying or begging paw motion then it’s very unlikely to be the result of some conflict.

I’ve also never seen a cat make this movement and not look very content so it’s not supported by context clues either.

Should You Every Worry?

As far as cat behaviors go, this one is quite safe. There’s very little worry about here and outside of some very rare neurological condition, the pray and begging paw movement is likely just a strange quirk for your cat.

Yep, this is a weird one, and while there’s no obvious answer as to why cats make this movement we can usually learn a lot based on related context clues.

The most likely explanation is that cats give this behavior a try and quickly find that it’s very popular with their human companion. From there, the behavior is continuously reinforced and a praying/begging cat is born!

What do you think? What explanation makes the most sense for your cat?