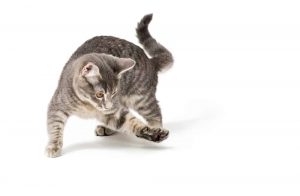 Cats have several ways to explore the world. From sniffing, licking, or even nibbling our curious cats aren’t afraid to interact with the world around them.

But why do cats bat at everything? Batting at things is one of the many ways that cats learn about the world around them. Batting something can tell a cat a lot about an object and it’s also a fun part of playtime. Many cats also get extra attention (both good and bad) when they bat things which encourages the behavior.

While that’s the quick answer, let’s dive a little deeper with 4 reasons why some cats love to bat everything!

That’s just a fancy way of saying kittens really like to bop and bat each other on the head and it’s one of the first things they do during playtime. Just check out this video of some chubby kittens battling it out! And make sure to count how many times they bat and bop each other!

But batting isn’t just limited to other kittens and cats. When a cat bats at things around the house they get the instant satisfaction of seeing it roll around…or fall of the counter. As predators and natural hunters, cats love anything that moves whether that’s your hand under the blankets or a shoelace. Movement is what interests cats and batting things is a great way to start a play session by getting some interesting objects in motion.

While many objects will simply fall over or not move much at all, your cat will occasionally find a toy or household item that they can pick up and knock around.  This is even more interesting for cats since they get to bat and play with things in the air! Wild cats, including the big cats, will play with their prey like this and toss their next meal up into the air. I didn’t include a video of that because it’s honestly a little disturbing but if you’ve ever seen a domestic cat catch a mouse or bird you probably know what I’m talking about.

If batting at things is your cat’s favorite playtime activity then your feline might like a food distribution toy. These simple (and budget-friendly) toys slowly release kibble as they get knocked around. You can check out my personal favorite on Amazon by clicking here but you certainly don’t have to go the food route to play with a cat that likes to bat. Heck, a crumbled-up and crinkly piece of paper will probably do the trick in many cases!

Reason 2: It’s A Safe Way To Explore The World

Cats have a legendary level of curiosity and batting things is a great way to safely explore or interact with the world around them. Batting can also let other animals know that your cat is trying to create distance but still isn’t afraid to assert themselves!

You can see cats bat at all kinds of unfamiliar things whether it’s another animal or an object that makes a strange noise, batting can be a safe way to get more information while literally keeping the curious object at arm’s (or paw’s) length!

It’s almost a decade old now, but when I think of cats batting critters I can’t help but remember the viral video of a cat batting an alligator until the alligator slowly walked away into the water. In case you’re afraid to watch it, just know that the cat is completely fine though I am concerned as to why no one else intervened. Still, it’s a great example of versatile the cat bat really is which goes a long way to explaining why so many cats frequently turn to it.

Your cat will quickly learn that batting at things around the house (including you) gets your attention.

While it might not always be the good kind of attention, most cats won’t particularly care. They just know that when they knock something off the counter or bat a piece of paper into the air you certainly react!

Whether you realize it or not, the attention you give your cat is positively reinforcing the batting behavior and encourages your cat to continue bopping away at things. That doesn’t mean your cat only bats things for your attention but it can certainly be a motivator for many cats.

This is especially important when it comes to cats batting at people. My cat Debbie has become increasingly demanding over the years and eventually learned that if she gave me a little bop on my arm that I’d stop what I was doing and pet her. While that’s not exactly a polite way for her request petting it worked and after a few rounds of that I realized what I had done! I was actually encouraging little Debbie to repeat this impolite behavior!

Consider what you do when your cat knocks something off the counter- do you give them some kind of attention that might pique their interest? When it comes time to put away the groceries my cat Debbie is quick to track down an onion and push it off the counter. She likes the wobbly roll of the onion and of course enjoys seeing it hit the ground. When I immediately ask her what’s she’s doing and put it back on the counter, it’s easy to see how a game has started in her mind!

That’s why it’s so important to really consider your actions after any cat behavior and make sure you’re encouraging the right behaviors from your feline friend!

Bating and pawing are an important part of your cat’s hunting process. The folks at the International Cat Care Society explain that cats have several stages to their hunt including stalking and eventually capture where “you may witness the cat holding itself in a tense position before a brief sprint and springing forward to strike the prey with one or both of their front paws.” Whether you call it a strike, a bop, or a bat on the head, it’s one of the first steps to the hunting process and a deeply rooted instinct for cats.

How To Discourage Your Cat From Batting Things

While batting things is usually not an issue, if your cat is constantly knocking things around the house or pushing objects off the counter the habit could become a little problematic.

Anytime you need to change your cat’s behavior it’s important to avoid focusing on negative enforcement like punishments or yelling. These techniques are rarely, if ever, the answer not only because they can damage the relationship you have with your cat but also because they don’t work.  I covered this in detail in the article on why you should stop spraying your cat with water and it applies here, too: Cats aren’t going to understand what you’re upset about and in many cases, they’ll just bat things around and push objects off counters when you’re not around.

So the real solution is to redirect the behavior into a more appropriate outlet. The 4 reasons above show just how deeply rooted the batting behavior is in cats and the idea that a spray bottle or a stern voice is going to change that just doesn’t make sense!

Instead, give your cat something they can bat and ideally make it more interesting. For example, placing a fun toy on the edge of a cat tree will probably more fun than whatever is on the counter. Then your cat will learn that batting things off the cat tree is a lot more fun than knocking around other objects. If you’re not sure what cat tree to get, I’ve got dozens of cat tree reviews across every category of feline!

Even better, you can give your cat a dedicated play outlet by scheduling some interactive playtime with your cat. Jackson Galaxy has a great guide to playtime with your cat and he really stresses the importance of interactive playtime instead of just buying a toy mouse and calling it a day. My absolute favorite toy for this type of play is the Da Bird wand and feather toy that mimics a real bird. This toy is great for cats that love to bat and you read some of the reviews from happy cat parents on Amazon by clicking here. Honestly, cats lose their mind over this toy.

Just remember that cats aren’t going to want to stop batting things- it’s literally in their DNA to bat at things. Instead, if batting becomes a problem you’ve got to redirect the behavior into a more appropriate outlet.

Did You Know Your Cat Has A Dominant Paw?

In our list of 134 fun feline facts, we found out that cats have a dominant paw just like humans! But unlike humans, there’s not general bias towards left or right paw dominance across the population; instead, it’s closely related to the gender of the cat. One study found that male cats were significantly more likely to use their left paw for everyday tasks (like batting around their favorite toy) and female cats were more likely to be right paw dominant.

While it’s not something I had considered before I read the study, it certainly makes sense that our cats would have a go-to paw for batting things around!

While the short answer is that cats bat at things because they’re cats, there’s actually a lot more to uncover! Cats bat at things from an early age and it’s one of the earliest forms of play for our feline friends. Closely tied to play, it’s also a critical part of their hunting process and batting at toys can help simulate the hunt. But batting is also a great way to get your attention- whether that’s a paw on your arm or knocking over an onion.

What do you think your cat’s main motivation for batting things is? Are they just having fun or are they looking for more attention?