Skip to Content
Written by Marina Titova in Health & Happiness last updated June 2022
BetterWithCats.net may earn a small commission when you use one of the links on this page to purchase. 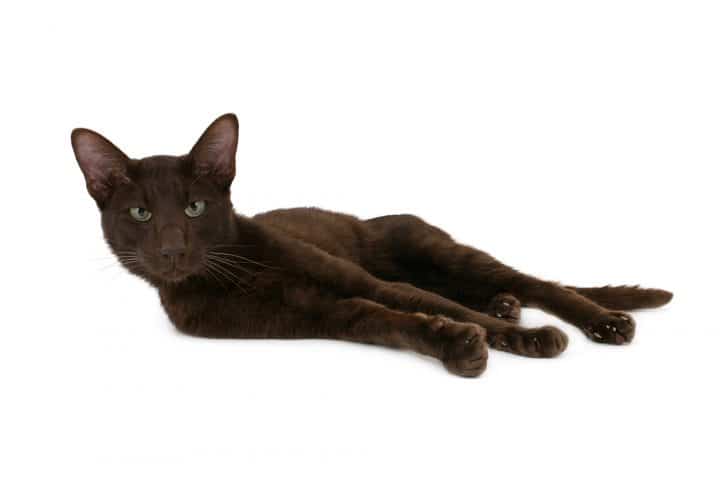 Cats come in all kinds of shades; some coat colors are more common than others while there are those that are incredibly difficult to find. One such color is brown, and to be more precise chocolate!

These cats truly are gorgeous and unusual, and it makes me wonder why there are so few of them? Is there a reason behind such rarity!

Why are brown cats rare? Cats with brown coats have a brown gene variant that reduces the amount of black pigment. While the brown tabby is easy enough to find, chocolate and cinnamon cats are rarer. The Havana Brown is one of the only breeds that has a “true chocolate” coat.

If you want to know more about chocolate and cinnamon cats and what breeds come in these shades of brown, then we got you covered!

What Determines A Cat’s Coat Color?

Before we dive deeper into why brown cats are harder to find, we need to take a look at what affects a cat’s fur color in the first place.

Just like with human skin, what determines a cat’s coat colors is melanin, which is a type of pigment. Melanin has two structural components, eumelanin which produces shades of brown and black, and pheomelanin that gives the fur, red and yellow coloring.

Why Are Brown Cats Rare?

Brown cats have a high prevalence of eumelanin and are products of the feline primary gene for coat color (B/b/b1). While the B codes refer to the color black, b and b1 are the recessive codes, and brown variants with reduced eumelanin, that makes cats appear brown in color.

What’s truly fascinating is that the gene that affects the production of black pigment displayed a mutation that caused brown coat colors in different species of mammals in the first place.

Researchers at the UC Davis Veterinary Genetics Laboratory “identified two mutations in this gene that cause different variations of brown coat colors in cats.” Not only is brown color a mutation, but if we look closer at how this recessive gene works we can clearly see why it’s so uncommon to find brown-colored kitties.

So, let’s take a closer look at each brown gene variant.

As I’ve mentioned above, there are two brown gene variants and chocolate brown is one of them, and it falls under the b code. Since black cats have a genotype B/B, they can’t display brown coloration or have brown offspring, but cats with B/b genotype (B stands for the back dominant gene and b stands for the recessive brown gene,) are carriers specifically of the brown chocolate color.

Now I know chocolate must be the one shade of brown that comes to mind when you think of brown cats, but light brown coats, also known as cinnamon is the second gene variant. Cats with b1/b1 genotype are cinnamon-colored and are most likely to transmit this specific shade of brown.

If on the other hand, they have the b/b1 genotype, chocolate and cinnamon then they’ll most likely pass on the cinnamon variant to 50% of their offspring and if two such cats mate then 25% of their kittens will probably inherit the cinnamon colors themselves.

Diluted Shades Of Chocolate And Brown

One of the rarest color shades in cats that you can in most cases find in purebred kitties is the light caramel color also known as Fawn. What’s so interesting about this color isn’t just that it’s a diluted form of the cinnamon color, but that there is another gene, dense pigment gene (D/d) responsible specifically for lightening a cat’s fur and making it look paler.

This gene (d) is also recessive, which means that both parents would have to have this gene (d/d) for a fawn-colored kitty to be brown. Now you might be wondering if there’s a coat color that is a diluted version of the rich chocolate shade (d/d)  and while it’s also rear it defiantly exists. It’s mostly known as lilac or lavender, and it too is usually found in purebred cats.

Solid black bats are oftentimes confused with brown cats because their fur can appear brownish, especially under the sun. Black cats don’t have a brown gene, this rusty discoloration of their fur can usually be blamed on sun exposure, which can be especially visible on long-haired breeds like the black Maine Coon!

My black kitty also turns to the brown side in the warmer months, only to shed every rusty spot as it gets colder. While this change is as natural as it is for our hair to get lighter during the summer, it’s important that we avoid letting our kitties light and especially dark, out when the sun is dangerously hot. Even though cats are mostly covered in fur, there are parts of their body that are exposed, like their ears and nose, and they’re likely to get sunburned or suffer from a heatstroke.

What Cat Breeds Come In Brown?

Most cats come in all shades, and chocolate, cinnamon, or their lighter variants are also included. Breeds like the British shorthair, the Persian as well as the Devon rex, can have a variety of coat colors, even the rare brown, but for certain cats wearing the different shades of brown is a staple of their breed, a part of what makes them so special and what makes them stand out.

This gorgeous cat is the only breed that can be called “true chocolate” not only is it extremely rare but while there over 200 million cats in the world, it’s estimated that there are fewer than 1,000 Havan Brown cats overall!

So, how did we get to have such rare beauty? Well, the Havana Brown is a manmade breed and they were created by crossing the Siamese breed that’s famous for their chocolate brown faces, the black domestic shorthairs, and the Russian blue.

Not only do these cats have a chestnut color, but their whiskers and nose are also brown! The Havana Brown is truly a breathtaking kitty as the CFA states “its distinctive muzzle shape, coat color, large forward-tilted ears, and striking green eyes set it apart from other breeds.”

The Your Chocolate is as you probably have guessed a rich brown kitty, but it’s quite different from the Havana Brown as it appears slightly darker, and it has a semi-longhaired coat. Since this is a new breed that appeared in the 80s not many cat associations have chosen to register it.

This beautiful cat was first introduced to America in the 1930s and through selective breeding, the solid brown coat was isolated. Of course, you can find Burmese Cat sporting four colors recognized by the cat fancier’s association, a rich dark brown, a warm beige, pale gray, or medium gray with fawn undertones.

No matter the shade I think the Burmese Cats have won my heart with their golden eyes!

According to CFA this long-legged and faced Oriental Shorthair “was developed to explore all the possibilities of color and pattern.” I mean they aren’t lying since there over 600 colors and patterns, and coat length combinations of this breed out there!

Since there’s so much variety you can imagine that the Oriental Shorthair can be brown chocolate, cinnamon, fawn or Levander, and any other shade in between!

I mean look at this gangly, chocolate beauty!

While this common breed of cats isn’t a solid brown color, there are four tabby cat patterns with distinctive markings and one of them combines brown and black stripes. Here in Greece where I live, I see many strays and among them, you can always find the classic brown tabby strolling along the streets.

For me, it’s the contrast between the honey brown and the dark stripes that makes them stand out!

I mean chocolate or not, I think all cats are sweet!

What about you? Did you know that brown cats are rear and would you ever consider bringing a cinnamon beauty into your home?