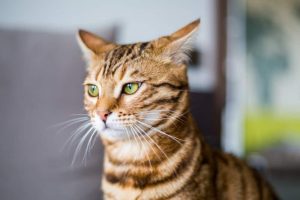 Whiskers are one of the many amazing things about cats. A cat’s whiskers not only make them look regal and dignified but also help them navigate the world around them.

That’s a lot of whiskers!

Let’s take a closer look at what these magical little hairs do and everything else you’d ever want to know about how many whiskers our feline friends have. But before we break down each whisker location, let’s talk about why cats have whiskers in the first place.

Why Do Cats Have Whiskers?

Whiskers do a whole lot more than just make our feline friends look fancy! Whiskers are almost like a superpower for our cats and enhance their already powerful senses by helping them rapidly learn more about the world around them. The simplest function of whiskers is to protect our cat’s face and eyes by sensing incoming objects.

But they can do a lot more than that!

Whiskers Help Cats Know Exactly Where They Can Fit

Did you know that a cat’s whiskers grow in proportion to their width?

That’s also why you’ll see cats confidently push themselves through an opening that doesn’t seem like they could actually fit! It’s because their whiskers told them that they can!

For a great example of this process in action, check out the video below. Watch as that handsome black and white cat lines his face and whiskers up against the narrow opening before pushing his way through!

Cats are famous for always landing on their feet. But did you know that whiskers are an important part of the righting reflex that helps cats pull this off?

Whiskers have something called proprioceptors, which are special sensory organs, at the very tip of each whisker. These special receptors help our cats rapidly figure out which way is down and along with several other mechanisms can help them land on their feet.

One of the most amazing things about whiskers is that they can sense changes in air currents. As a result, cats can “feel” the movements of different objects without actually being able to see them. Not only can this help our cats find prey or avoid predators in low light, but it can also help them sense objects or animals that are coming towards them before they can even see them.

For us humans, this whisker function is probably the most foreign and difficult to relate to. The closest thing we have are probably eyelashes which can help protect our eyes by warning us of oncoming objects. But it’s still very different from this powerful whisker ability.

Do All Cats Have 24 Whiskers on Their Cheeks?

While most cats have 24 whiskers, this can vary by breed and sometimes the individual cat. But if you notice your cat doesn’t have the normal amount of whiskers there’s also a chance that one of them has simply fallen out- which is totally normal.

Even though whiskers may seem like a fragile and magical organ, they’re actually a special kind of hair (called vibrissae) and they can fall out just like any other hair. It’s normal for cats to occasionally shed whiskers and you’ll find them around the house now and again.

So if your cat seems to be missing a whisker, it’s possible that your cat’s whiskers were simply in transition when you did your count and you’ll have to check back later to see if the missing whisker grew back.

In other cases, cats may just have fewer whiskers. However, the distribution is usually still symmetrical. For example, if you notice that your cat has 20 whiskers with an even amount on each cheek it’s likely that it’s the normal distribution for your feline friend.

Cats Have Eyebrows Whiskers Too!

In other words, these eyebrow whiskers complete the picture of what the cheek whiskers are sensing but they’re also critical to protecting your cat’s eyes.

Most cats have 6 to 8 eyebrow whiskers but these seem to vary a bit more than the cheek whiskers which are more uniform.

Your Cat Even Has Whiskers On Their Feet!

While most of the attention is given to the highly visible whiskers of the face, cats also have 6 to 8 whiskers on the back of their front legs.

These whiskers are a lot harder to find but you can see a good image of them here (you’ll still have to look closely): 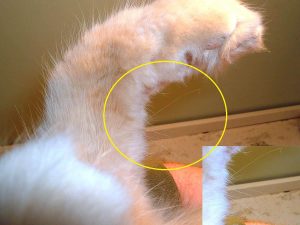 But why would cats have whiskers on the back of their front paws? How could that help with sensing incoming objects or detecting currents?

They don’t (at least that’s not their primary function)!

Instead, these whiskers, which are called carpal whiskers, help our cats get more information about things that are already within their reach or even in their paws. This is a critical part of the hunting process which includes cats capturing their prey in their front paws.

Cats need these whiskers because they can’t actually see very well up close. While cat’s eyes are extremely powerful (and one of the larger compared to the size of their head) according to veterinarian Kerry Ketring “because cats lack the muscles necessary to change the shape of their eye lenses, they can’t see things clearly quite as close as humans can and need to be further away.”

That means paw whiskers help fill the gap in what cats can see and complete our cat’s super-sensory setup!

How Many Rows of Whiskers Does A Cat Have?

Cats have four rows of whiskers placed on each cheek. Each row has three whiskers each of which are evenly and symmetrically placed. When you look closely at the base of each whisker, you can see just how perfectly placed they are!

So, What’s The Total Whisker Count for Cats?

Cats typically have 24 cheek whiskers, 6 to 8 whiskers above each eye, and another 6 to 8 carpal whiskers on each front paw. When you add all these up, we find that cats have between 48 and 56 whiskers across their entire body!

That’s a lot of whiskers!

But when you consider just how powerful the feline whisker really is it’s no surprise that they have so many!

Whiskers really are amazing sensory tools that enhance our cat’s already powerful senses and in the case of carpal whiskers help make up for a lack of close-up vision. While most cats have 24 whiskers on their cheek, when you consider the whiskers above the eyes and on the paws, the total whisker count is double that!

Have you counted your cat’s whiskers yet? Does your feline friend have the standard 24 cheek whiskers or are they a bit more unique?