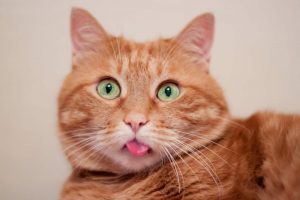 Cats can pick up some very weird behaviors.

Some of the strangest habits we’ve heard about revolve around cats licking different household items- or people. We’ve talked about cats licking windows, walls, and plastic but now it’s time to talk about another unusual material: concrete.

So, why do cats lick concrete? In many cases, concrete or cement licking is related to pica resulting from anemia, a lack of calcium, or other nutritional deficiency. In other cases, cats may just lick the concrete because they like the texture, temperature, or even the taste of the concrete.

While this habit can seem a bit silly, there are actually some important health implications to watch out for so let’s take a closer look at why our cats may decide to lick something so strange.

Reason 1: It Could Be Feline Pica

Feline pica is a complex condition with multiple, and sometimes even unknown causes, that compel cats to eat or lick non-food items. However, not every case of a cat licking something strange is necessarily related to pica and many cat licking situations can be explained in other ways. For example, when we talked about why cats lick shower curtains, we explained that some cats just enjoy drinking water off the shower curtain.

And while there are some easy answers to licking concrete too (and we’ll get to those), there’s also the chance that your cat has nutritional deficiencies that are causing pica symptoms. What can make things confusing is that pica is usually related to an underlying issue like anemia or other nutritional deficiencies. In other words, a concrete licking cat may be showing symptoms of pica as a result of anemia or another issue. There’s also quite a bit of overlap between the two and VetInfo.com even lists “licking concrete, eating cat litter or soil” as a symptom of anemia.

While it’s not always clear why nutritional deficiencies lead to eating rocks or licking concrete, the most common argument is that cats are compelled to try and make up for the nutritional deficit any way they can. Our feline friends aren’t the only ones that do this either and when pica is seen in humans it also includes eating similar items like concrete and soil.

Other veterinarians suggest that licking concrete could be related to calcium deficiency. Many cats with chronic kidney disease can have either too much or too little calcium leading to licking concrete, cement, or similar surfaces.

And this is exactly what makes this specific behavior and pica so confusing! There are multiple causes but all of them fit into the big bucket of feline pica.

Because of this, if you’re seeing a sudden behavior change in your cat, like licking concrete or anything else, then it’s best to consult your veterinarian. They can help figure out what’s going on whether or not your cat is licking concrete as a result of pica or for one of the more benign reasons on this list.

But licking concrete or cement doesn’t have to be related to an underlying medical condition and some cats may just enjoy the particular texture or temperature of concrete. We’ve looked at the texture and temperature answer to explain several feline licking behaviors including licking the windows or even the blinds and it also applies here.

Cats don’t need a major reason to occasionally lick something and they may just enjoy the smooth or rough texture. Or they may like the way the concrete seems to hold extra heat or coolness depending on the weather.

Either way, with so much variety to the texture and types of concrete and cement, there’s something for every cat- as weird as that sounds.

Still, after talking to hundreds (and hundreds) of people about their cat’s weird habits it seems that most cats prefer to lick smooth surfaces. Licking can be soothing to cats and while most of the time excessive licking is directed to their own fur, it seems that some cats find licking another object soothing too.

Even though most of us don’t look at a slab of concrete in the sun and think, “Wow, that looks yummy!” our cats just might.

But not without a good reason- it’s possible that concrete really does taste good to our cats.

Many folks have reported cats licking concrete patios or other outdoor seating areas. What happens in these types of areas?

People eat! And when they eat they spill food! There’s a good chance that over time this leads to all kinds of interesting tastes and smells soaking into the concrete. From smokey barbeque to tasty sandwiches your cat is happy to lick up these flavors (and maybe a little food).

If your cat is especially food motivated, it won’t take much to reinforce this behavior. If they’ve licked the concrete once after smelling something interested and were rewarded with an interesting taste then they may just add some concrete licking to their daily rotation. You know, between naps and grooming.

However, this reason also has some potential cause for concern. Cats that lick concrete or cement driveways might be pursuing ethylene glycol which is a major ingredient in antifreeze. Antifreeze is extremely toxic to not only cats but also just about every other living creature. According to PetMD, as little as a single teaspoon can be fatal to cats.

Even worse, cats are attracted to ethylene glycol and will seek it out. While it’s still a little unclear why cats like the taste of antifreeze so much, it’s sadly a common issue. Some suggest that cats like the sweet flavor of it but cats can’t actually taste sweet so there’s likely something else that compels our cats to go after antifreeze.

Whatever the reason, you need to be careful if you notice your cat licking the concrete around a driveway or anywhere else that cars are kept.

This isn’t likely to be the primary reason but you might be surprised at how many cats continue a certain behavior just because they like the attention they get from their cat parent!

Licking concrete or cement is no exception and if everytime your feline friend starts to lick concrete you give them attention by laughing, talking to them, or petting them then your cat will quickly learn that licking concrete leads to attention from their favorite person! As I’ve already mentioned, for some cats it doesn’t take much more than that to reinforce a behavior!

Of course, this wouldn’t be the primary reason for a cat to start licking concrete (which is why it’s an honorable mention) but it could explain why cats continue to keep up the behavior- especially if there is another source of positive reinforcement too. For example, a cat might lick the concrete because of an interesting taste under the table and then be further rewarded when you give them attention after this silly behavior.

That’s enough reason for many cats to keep licking concrete!

Should You Worry About Your Cat Licking Concrete?

While cats lick lots of things, and many times it’s nothing to worry about, licking concrete is a little different.

Not could licking concrete be related to pica caused by anemia or calcium deficiencies but if your cat is licking the concrete of a driveway then there’s a chance they could be attracted to antifreeze.

Neither of these are good situations (to say the least) for you or your feline friend.

So while many licking behaviors can be attributed to our cat just being silly, licking concrete isn’t necessarily one of them. At least not until you’ve done some investigating, along with your veterinarian, about why the behavior is happening in the first place.

How To Stop Your Cat From Licking Concrete?

In most cases, concrete or cement is outside the house. That means one of the easiest ways to prevent your cat from licking concrete is to keep them indoors.

And weird habits aren’t the only reason to keep cats indoors. According to PetMD, “cats who are kept indoors can reach the ripe old age of 17 or more years, whereas outdoor cats live an average of just two to five years.” Not only because cats are kept safe from wild animals, cars, and accidents like licking up antifreeze but cat parents are also able to more quickly notice changes in health and take action.

However, because licking concrete could have underlying medical causes, you’ll need to do more than just remove access. You’ll also want to make sure your cat is healthy which means a trip to the veterinarian.

If your cat leaves with a clean bill of health, then it’s fair to say that your cat has picked up the behavior for more benign reasons like simply enjoying the texture or the taste. If your cat is spending a lot of time outdoors, it’s honestly going to be very difficult to stop them from licking concrete. Your best option is to try and redirect the behavior by making something else more appealing or providing some other kind of entertainment to your cat.

As with many unusual feline behaviors, licking concrete turns out to be more complicated than it might look at first glance. While the behavior might just seem silly, it could actually be related to feline pica and be a symptom of an underlying nutritional deficiency. In other cases, it could be your cat’s confusing and dangerous pursuit of the ethylene glycol found in antifreeze.

Still, it’s not all bad and a handful of cats may simply enjoy the interesting tastes, smells, and textures of the concrete or cement.

But it’s never safe to assume and if your cat suddenly starting licking concrete, it’s a good idea to talk to your veterinarian about what could be going on.