Skip to Content
Written by Logan Michael in General Info last updated April 2022
BetterWithCats.net may earn a small commission when you use one of the links on this page to purchase. 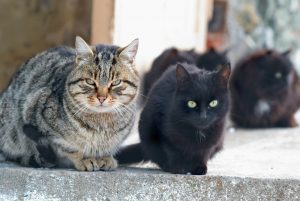 We all know what to call one cat. And two cats are just a pair of felines.

But what do you call a group of cats?

A group of three or more cats can be called a clowder though it is rarely used. Even rarer is a glaring of cats which refers to a group of cats that are more uncertain of each other. A group of kittens may be called a kindle or more commonly a litter.

However, the interesting names don’t end there! Male cats, especially ones that haven’t been neutered, are often referred to as Toms while female cats are called queens.

Where did these strange terms come from and does anyone actually use these words today?

The history and origin of a word is called its etymology. In addition to its origin, a word’s etymology also tells us how the meaning has changed over the years and sometimes the scenario in which it was first used.

That means a good place to start is with the etymology for each of these words.

Etymology of the Word Clowder

According to Wiktionary, the word clowder has been in the English language since 1801 and is considered a variation of the word clutter. The word clutter was derived from the Old English word clott. Before that, it can likely trace its origins to the early German and Dutch languages. Clowder and related words typically referred to lumps or balls.

If you’ve ever seen a group of cats, especially around a food bowl, it should be no surprise that words like ball, clump, or even lump would eventually be used to describe them! The word clutter is also certainly relevant as cats aren’t exactly known for being organized in groups. Some sources also cite “clutter” as another term for a group of cats!

While it’s certainly not used with any frequency, clowder did make an appearance in an episode of the Big Bang Theory. You can check out the clip here:

Etymology of the Word Glaring

In the clip above, Sheldon also mentions the word glaring in addition to clowder.

But that’s not entirely correct.

Most sources suggest that a glaring of cats specifically refers to a group of cats that are somewhat unfamiliar with each other and it seems like Sheldon’s cats are quite comfortable with each other.

However, finding more information on the history of the word glaring (at least when it’s used in reference to cats) is pretty difficult and I can’t track down much more information. Some sources also don’t distinguish how well the cats know each other and still others seem to suggest that it takes at least 4 cats to make a glaring.

So maybe Sheldon was right after all.

However, I do know that the word glaring is more than 700 years old and has origins in early Germanic languages which is a pattern we keep seeing.

Do kittens have a different name when they’re in a group?

Yep, they sure do!

Most of us are probably familiar with the word litter which goes back several hundred years. In fact, you can see this word used as early as 1602 in Aesop’s Fables. However, litter isn’t limited to cats and it’s used for all types of mammals. It’s also specific to animals that have the same mother. In other words, kittens in the same litter are all related and they’ll also sometimes be referred to as littermates.

But that’s not the only word you can use.

What Is A Kindle of Kittens?

Similar to a litter, a kindle describes a group of kittens. I’ve found a few sources that suggest a kindle of kittens is specifically kittens of the same mother but then there are others that suggest this distinction is optional so it seems like it could go either way.

It would actually be useful to have a definition for a group of kittens that aren’t related so maybe we can help kindle catch on with that specific definition!

Like all of the words we’ve looked at so far, kindle appears to have origins in early Germanic languages.

Does Anyone Actually Use These Words?

If you went out on the street and asked about the nearest clowder of cats…would anyone know what the heck you’re talking about?

I worked in the veterinary field for more than a decade and I can count a grand total of zero times that I heard anyone say the words clowder, glaring or kindle. Instead, it was simply 21 cats or 4 cats. Of course, the word litter was used all the time but beyond that, you’d always want to know how many cats were being discussed and not just a general term that described a group.

But I’m certainly not going to stop you from using words like clowder or glaring. You could even use it as a test to figure out if someone is a diehard cat lover (or least avid fact finder)!

What About Big Cats?

But what about big cats?

They’ve got their own entirely different set of terms, in part because they live very differently from the housecat. In the wild, your house cat would typically live a solitary life but lions live in large groups with a distinct hierarchy and their groups are called prides. A pride could have as many as 40 lions! That’s quite a clowder!

Now you’re ready to impress the world with your advanced knowledge of cat terminology!

How are you going to work in the phrase “a clowder of cute cats” into your next conversation?