Skip to Content
Written by Logan Michael in Declawed Cat Questions last updated July 2022
BetterWithCats.net may earn a small commission when you use one of the links on this page to purchase. 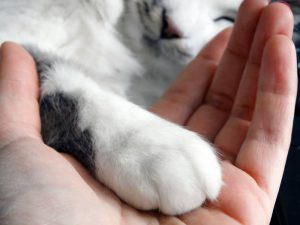 Declawing is steadily decreasing in popularity and in many countries, the practice is completely illegal. But there are still thousands and thousands of cats that have already undergone this procedure.

Is there any chance that these cats could have claws again or is declawing cats permanent? In other words, can declawed cats ever grow their claws back?

Despite the name, declawing is actually the surgical removal of a cat’s last toe bone. It’s very different from a simple nail trim and if done correctly it’s considered a permanent solution with no chance of the claws ever growing back. However, if done incorrectly a rudimentary nail can grow.

Not only does the declaw procedure have a relatively high risk of complication when done correctly, but if done incorrectly painful claw growth could occur. Even in cases of a botched declaw, cats will never regrow their claws like they were before and these situations will typically require even more surgery.

We’re going to look a lot closer at this subject but first, let’s make sure we’re on the same page with the difference between a nail trim and a declaw surgery.

Understanding The Difference Between Nail Trimming and Declaw Surgery

If you take the name “declawing” at face value it sounds like the only thing being removed are the actual nails or claws.

But the reality is much different and the procedure could be more accurately described as a “de-toeing” surgery.

That’s because the last part of each toe is removed as part of the surgery. It’s the equivalent of removing the last knuckle on each of your hands and not only does it remove the claw but it also changes the function of the paw overall.

If you think about your own nails, it makes sense that removing them would require the removal of the last knuckle as well. After all, most folks have experienced or seen an injury where all or part of the nail falls off. It may take a long time to grow back, but it eventually will.

The same is true for cats and the only way to get rid of the claw is to remove the toe which makes this a permanent solution, at least when done correctly.

How Could A Nail Grow Back After A Declaw?

But when a declaw surgery is done incorrectly, a veterinarian may accidentally leave part of the ungual crest behind and only partially remove the last toe of the bone. The ungual crest lies deep within the last toes and is where the claw grows from.

You can think of this area as the nail growth center. However, even when part of the ungual crest is left behind, the anatomy of the nail is changed so significantly that the ungual crest still can’t function normally and you’re left with small, rudimentary, and generally unfunctional nails that can sometimes grow directly out of the paw.

Sadly, the growth of these nails can be quite painful for cats which can lead to additional behavior changes and the need for corrective surgery.

How Often Do Declawed Cats ‘Regrow’ Their Nails?

Despite being considered a permanent solution, we’ve already established that claw regrowth can occur.

But just how often does this happen?

It’s hard to say exactly and the true prevalence will vary greatly depending on the experience level of the veterinarian and the technique used but according to statistics from the AVMA, “Approximately 3% of declawed cats exhibit claw regrowth.” Other studies suggest a regrowth rate as high as 10% in some cases.

In the majority of cases, claw growth is connected to the guillotine method of declawing. This method removes the last third of the toe using guillotine-style nail trimmers or a scalpel.

I wouldn’t consider nail trimmers to be a surgically precise instrument so it’s no surprise that their use in surgery can lead to complications.

Other methods, like the use of lasers, have a much lower risk of claw regrowth, along with other complications, but are just as bad in terms of long-term detriment to the cat.

Can You Reverse A Declaw?

That’s because declawing is the removal of bones and claws. While nails will grow back after trimmed, there’s no way to grow back bones.

What Is A Declaw Repair Surgery?

Part of the confusion around whether or not declaw surgeries can be reversed may stem from something called a declaw repair surgery. This is a surgery where botched or incomplete declaws are surgically repaired.

When the declaw isn’t done correctly, not only are there concerns around nails regrowing but bone fragments can be left behind. This can cause complications in the healing of the surgical site but in many cases, the cat’s body will just heal around these bone fragments which can lead to chronic pain.

There are several groups out there that specifically focused on repairing poorly done declaws and you can get a better idea of what they do in the video below. Just be aware that there are some slightly graphic images of the removed bone fragments and blood.

What Can You Do If Claws Start To Grow Back?

If you notice that your declawed cat is suddenly starting to grow back small nails then you’ll want to visit your veterinarian. In many cases, the growth of claws after a declaw can be quite painful for cats but even if your cat doesn’t seem to mind you’ll still want to have your veterinarian assess the situation.

X-rays can help you get a better idea of what’s going and anticipate any future changes that could cause more problems.

In some cases, declaw repair surgery may be required and in other times it may make more sense to simply leave the tiny claws where they are. Your veterinarian can help you decide.

What If A Claw Is Removed Without Surgery?

What about cases where a claw is removed as a result of an accident or other issue outside of a surgical declaw…will claws grow back in these cases?

Claws that are removed as a result of trauma or an accident will usually grow back on their own, although it will be a slow process. Unless the ungual crest at the very base of the toe is removed, the claw should eventually grow back. But if the accident is bad enough, or removes the last portion of the toe, permanent claw removal can occur just as it would in a declaw surgery.

Are There Alternatives To Declawing?

It’s common to downplay the impact of declaw surgery on cats. Cats are not only very good at hiding pain but they’re also extremely adaptable. Folks will often refer to declawed cats that they’ve seen climb trees or fences as an example of how the procedure doesn’t slow them down. Heck, declawed can even make excellent mousers in some cases but that doesn’t mean they do these things pain-free.

Even though we’ve been focused on the question of whether or not claws can regrow after declawing surgery, you really can’t answer the question without touching on the problems with declaw surgery in the first place.

Not only is the procedure painful for cats, both in the short term and long term, but it frequently leads to behavior problems that are far worse than scratching furniture.

While cats can grow back their claws after a declaw surgery it’s not done in the way that you’d expect.

After the removal of their bone as a result of declaw surgery, cats will never be quite the same and when claws do grow back it’s a problem. In some cases, cats can live with their new tiny claws without issue but in other cases, it will require surgical repair to remove the remaining ungual crest.

Sadly, declaw surgery really is permanent and while repairing a bad declaw can help cats be more comfortable, there’s no way to ever fully reverse the procedure.