Skip to Content
Written by Logan Michael in Health & Happiness last updated January 2022
BetterWithCats.net may earn a small commission when you use one of the links on this page to purchase. 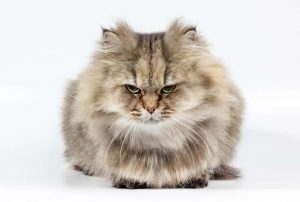 You already know that you need to trim your cat’s nails…or at least keep an eye on them.

But some cats are so resistant to even having their nails looked at, that it can feel impossible to trim them. What’s going on here? Why do so many cats absolutely hate getting their nails cut?

While it’s going to vary between different cats, most just don’t like the restraint required during the nail trimming process. Unless nails are trimmed too close, the process isn’t painful but it’s a weird and usual experience for your cat that they just don’t like.

Let’s look a little closer at the specifics between some of the most common reasons why cats hate trimming time!

Your cat is used to being gently pet on all their favorite spots- the ears, back, and maybe even a few tail pets. Then one day, all of sudden, you decide that the only thing you want to do is take a hold of their toes! Of course, your cat is a little confused by all this!

While anthropomorphizing our cats can be a bad habit, it’s not unreasonable to imagine how this could play out for humans. Imagine if your roommate one day decided that they just had to look at your scalp! Even when you asked them nicely, they just kept following you around trying to look closely at your scalp through your hair. Or even more specifically what if your roommate wanted to trim your toenails!?

That’s an admittedly silly example but the idea here is to highlight how unusual playing with your cat’s feet can be compared to the normal interactions you have. And that’s the first problem to overcome!

Solution: Don’t Make It Weird To Touch Your Cat’s Feet

While that headline out of context is weird, there is a good point here! You can slowly desensitize your cat to having their feet touched, and if you’re patient, this can really make the process of getting their nails trimmed a lot less stressful. Of course, the best time to start was when your cat was a kitten but the second-best time to start is today! The next time you pet your cat, get them used to you just touching their feet for a second or two. They don’t have to love it but rather just not be so surprised by it.

This works especially well if your cat is food motivated and you can give them a treat every time they stick around after you touch their feet. Over time, you can start holding your cat’s feet and messing around with their toes. Eventually, they’ll learn that if they put up with your weird paw touches they get more petting or treats.

You’ll also want to make sure you’re holding the nail trimmers or making sure your cat sees them during this process. You not only want to desensitize them to the process of getting their nails trimmed but also desensitize them to the actual trimmer. If they only see the trimmers right before something they don’t like happens then you’re setting the stage for nail trim anxiety.

After you’ve gotten your cat used to the feet touches (and the presence of the trimmers) the only thing left to do is actually trim! But don’t stop with the treats and rewards!

Reason 2: It Hurt One Time!

Do cats suffer when they get their nails trimmed and does it hurt cats to cut them? When it’s done properly, nail trimming is completely painless and the only discomfort cats face is the experience of being held for the trimming. While that could certainly be considered a form of suffering, the trimming process shouldn’t be a painful one.

Still, when nails are cut too short it can be uncomfortable for cats and in some cases downright painful. That’s because every cat nail has something called the “quick” which is where the nails and blood vessels are located. If cut this will hurt the cat and the nail will bleed. If your cat has had their quick cut in the past then that may be all it takes to make them fear the nail trimming process.

Unfortunately, bad experiences are more likely to stick out in our memory, and the memory of our cats, more than positive ones. That means you’ll have to work extra hard to transform the bad experience your cat had into a good one. You can use the same steps as above but be patient because getting the quick cut can really be an unpleasant experience that your cat won’t soon forget.

How To Avoid Cutting The Quick

Okay, now you might be scared that every nail trim is going to cut the quick. But don’t be worried. Luckily, most cat claws are clear which means you can easily see where the quick starts and where you need to avoid. To make things even easier, I’ve put together this quick (pun intended) picture: 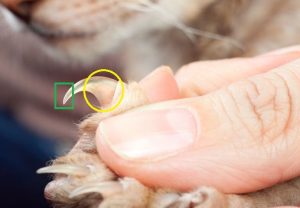 If you look closely inside the yellow circle you’ll see some pinkish stuff inside the nail. That’s the quick, which is what you want to avoid. The green box gives you an idea of where you can trim even if you’re completely inexperienced. You’ll also notice that there is plenty of room between that green box and the quick. In other words, you can keep your cat’s claws comfortable and trimmed without ever having to even get close to the quick!

You can also see more images and a complete nail trimming guide here.

Even your cat has never experienced the uncomfortable experience of having their quick cut, they still may have had some unpleasant experiences with nail trimming.  Dull, old, or generally low-quality trimmers can often make the experience more uncomfortable because dull trimmers will pull on the nail more than they cut. Think of the same effect that cutting hair or paper with dull scissors has- instead of actually cutting it just mangles and pulls whatever you’re trying to trim.

A dull trimmer will have the same effect on the nails. As if that wasn’t enough, they’ll also drag out the entire process since you’ll have to go over the same nail several times over to get the trim done.

Does that mean you need to spend a fortune on fancy-schmancy cat trimmers? Absolutely not, you can get a solid pair off Amazon for the price for a fancy-schmancy Starbucks drink. You can see what I’m talking about here. Not only will sharp trimmers make the process more comfortable for your cat, but they’ll also make it go faster.

While it sometimes seems like each cat is their own island of emotion, our feline friends are definitely taking cues from you- at least some of the time. And if you’re approaching the nail trimming process with a lot of stress and anxiety, you’re cat is going to pick up on that. It’s important to approach the nail trim calmly, even if your cat acts like they’re being kidnapped.

No, it’s not going to instantly make your cat calm down and embrace the nail trim but it can certainly help.

While not trimming your cat’s nails over a long period of time can eventually lead to problems, in most cases, it doesn’t have to happen that second. With that in mind, one of the best things you can do to stay calm is just taking your time. Try to sneak in and get even just one claw trimmed during a petting session and call that success instead of becoming deadset on getting every nail trimmed.

Know That You Aren’t Hurting Your Cat

We love our cats so sometimes it can seem really uncomfortable to see them stressed out- especially when it feels like we’re the root cause of it! But just remember, that even if a cat hates getting their nails trimmed, you’re not hurting them when you do it properly.

Sometimes the best way to destress yourself is to destress your cat. I know that’s easier said than done but along with going for super short nail trimming sessions, you should consider incorporating petting, treats, or even playing. Basically, anything that your cat enjoys

Okay, don’t take it personally but there’s a chance that your overall approach is just a bit…bumpy. That’s completely okay! It takes practice to quickly and efficiently trim a cat’s nails and if your feline friend is an expert at fighting off the nail trimmers then things are even tougher.

Restraining cats and other animals for procedures like nail trimming is a real skill that can take years to develop. When you aren’t efficient with your restraint, cats are more likely to squirm and struggle since not only do they know they can get out but they may not be as comfortable with the way you’re holding them.

But there is one shortcut that can really help the process…

The kitty burrito is a classic restraint technique used by veterinary professionals and groomers. Exactly what it sounds like, you use a towel to wrap your cat into a cute little burrito which limits how much they can run around. I’d highly recommend you do this with a friend with one person handling the burrito and another person doing the trimming. You can see a video of how this works here:

A burrito wrap does more than just keep your cat from squirming as much, there’s also plenty of scient that suggests swaddling animals in a tight wrap can actually reduce stress. While some of the more recent studies are related to canines, it’s reasonable to suspect that cats will experience a similar effect.

Should You Hire A Nail Trimming Professional?

If your cat is really stressed around nail trim time it might make sense to find a professional. Someone with a lot of experience trimming cat claws can get the entire process done in less than 30 seconds- that’s not an exaggeration!

In most cases, a nail trim from your groomer will cost around $10 to $25. However, the big problem with this is that many cats will find the trip to the groomer more stressful than the actual trimming!

While it might seem a little strange, if you call around a few veterinary practices there’s a good chance you’ll be able to find a veterinary technician who’s willing to visit your home for the nail trim. It’s not going to cost much more than the groomer and you still get all the benefits of a professional. I’ve personally visited offered this service to a few folks and there are also quite a few mobile groomers in most larger cities.

The other great benefit here is that you’ll get a chance to see how a professional handles the nail trimming process. You might get even get some validation if you see your combative kitty giving them trouble too!

It shouldn’t exactly surprise us that our cats hate getting their nails trimmed. It’s a weird experience and can pretty far outside the usual interactions that they have with us. But if we address the specific reasons why our cats hate claw trimming and try to address them we’re going to be that much closer to a successful trimming time.