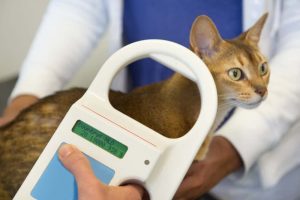 You’re giving your feline friend a nice pet and suddenly you feel something firm between their shoulder blades. You know most veterinarians place the microchip in that area, but can you actually feel the microchip under your cat’s skin?

Yes, you can feel your cat’s microchip! It has the same shape as a long grain of rice and it’s usually easy to find between the shoulder blades, especially if your cat has a healthy body condition. It’s especially easy to find on underweight cats as they have less subcutaneous fat in the way.

After a decade working in the animal welfare field, I’ve scanned thousands of microchips in cats, placed a similar amount, and even x-rayed a couple of dozen. So let’s break down everything you need to know about finding and feeling your cat’s microchip!

What Does a Microchip Feel Like In A Cat?

A microchip feels very similar to a grain of rice but is about 30% larger. It has the same shape and firmness as long grain rice and to get an even better idea check out this picture below: 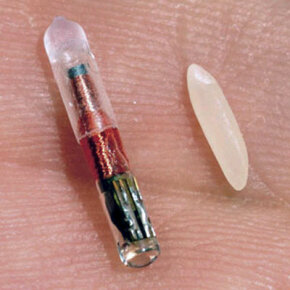 How To Find Your Cat’s Microchip?

The process for finding your cat’s microchip is pretty straightforward. Here’s how to do it:

While this will work the majority of the time, there are some situations where it could be more difficult to track down the microchip.

What If You Can’t Find The Microchip?

First, consider whether or not your cat has a microchip! If you know that there’s one in there then the microchip may have migrated or your cat may be a bit too fat!

Wait, My Cat Can Be Too Fat For Me To Feel The Microchip?

Microchips are places in the subcutaneous layer of your cat’s skin. This area of skin can serve as a sort of reservoir for nutrients including fat. As cats gain weight, there’s a lot more going on in the subcutaneous layer and just as it’s more difficult to feel your cat’s ribs when they’re fat it’s more difficult to feel the microchip.

This is especially noticeable if you’ve ever seen an underweight cat since you can very easily feel the microchip with just normal petting. Cats that are obese also have less loose skin to work with and the process of lightly pinching the loose skin to find the microchip might not work as well.

Can A Cat’s Microchip Move?

Over time, a cat’s microchip can actually move or migrate to a new area. Remember, the microchip is implanted in the subcutaneous layer of skin so it’s not exactly locked in place. While most microchips tend to stay put, some can make their way to the left or right side of your cat’s shoulders. These are by far the most common locations for chips to migrate and it makes sense when you consider the role of gravity! Naturally, chips are more likely to migrate down to your cat’s feet than towards their head or hind end.

Can A Cat’s Microchip Fall Out?

If you can’t feel or find the microchip on your cat, you might worry that it’s fallen out. While it’s possible, this typically only happens at the time of implanting the chip.

In some cases, the needle that houses the microchip won’t fully penetrate the skin and the microchip can slip out or never fully make it through the skin. That’s why it’s typically best practice for veterinary staff to not only rub their hand over the implementation site but also scan the area with a microchip scanner to make sure the chip didn’t slip out without them noticing.

So if your cat has had a confirmed microchip for a few years (or even a few days) it’s pretty unlikely that it’s fallen out.

How To Be Sure It’s A Microchip?

Finding a microchip is all well and good…but what if it’s something else?

If you’re ever unsure the best thing you can do is contact your veterinarian. They will have seen hundreds and hundreds of microchips and they’ll know immediately whether or not you’re feeling a mass or a microchip.

While it’s not medical advice by any means, it’s fair to say that most growths and masses of the skin have a round shape that’s quite different from the oblong rice shape of a microchip.

If you have access to a microchip scanner then things are even easier! Simply use the scanner on the area where you think you found the chip and see if it reads.

But again, if you’re ever worried or unsure, it’s always best to consult your veterinarian.

Other Ways To Find Your Cat’s Microchip

In some cases, a cat is thought to have a microchip (or you’re able to feel it) but it doesn’t scan.

So what can you do?

Veterinarians can actually take an x-ray of a cat to find a microchip! This can be helpful if the chip is malfunctioning or to find a migrated chip.

Check out this migrated microchip in a rabbit (it’s the red circle towards the left of the image):

For a better idea of where the microchip should be, check out this x-ray from a dog below. Can you find the microchip (it’s right where it should be between the shoulder blades)? 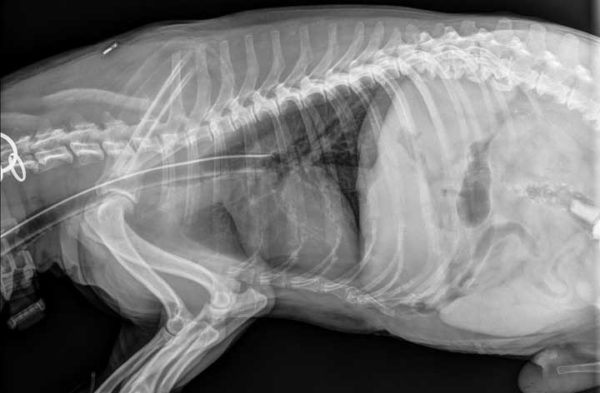 Finding your cat’s microchip is actually pretty fun! It also gives me an extra sense of security knowing that I can actually feel it (just in case). But even if you can feel the microchip it’s still a good idea to make sure your veterinarian is scanning the chip as part of your cat’s check ups. While it’s not common, chips can malfunction and stop sending a signal.

It’s also critical to make sure that the chip is registered with you! Over a 10 year career in animal welfare, I can’t tell you how many times cats came into the shelter with a microchip that wasn’t registered. That means that chip is effectively useless and we have no way of connecting that cat with thier owner.

So just feeling the microchip is not enough! Make sure it’s working AND registered to you and your family.