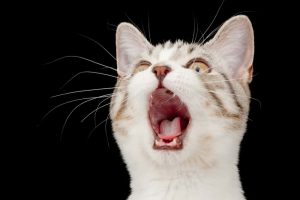 We’re naturally inquisitive about our cats and while most questions revolve around their strange behaviors, we’re often curious about the interesting anatomy of our feline friends.

While you may already know about their powerful tails, amazing whiskers, or unique bone structure…

Do you know whether or not your cat has a uvula? You know, that weird-looking, teardrop-shaped piece of pink tissue that hangs down from the back of your mouth.

So, do cats have uvulas? Cats do not have uvulas. While some species of baboons have something that appears to be underdeveloped uvula, humans are actually the animal animals that have a fully-developed uvula. Uvulas appear to be related to speech as they help lubricate our vocal cords so it’s not too surprising that humans are the only animals to have them.

That’s the quick answer but if you’re interested in learning more then keep reading! We’re going to dive deep into this unusual organ.

The Uvula Is A Bit Of A Mystery

While you might be expecting to get some concrete and simple explanation for everything the uvula does, it’s not exactly that easy. The uvula is one of the many things that we don’t understand fully understand about our bodies and it’s not for lack of trying!

One study looked at all the different proposed purposes for the uvula which range from protecting our nasal passages while eating and drinking to more specifically helping us drink while bent over or to help keep vocal cords lubricated during speech.

Researchers concluded that “Both uvula and speech serve to differentiate human beings from animals. Our conclusion is that the uvula is possibly an accessory organ of speech, and may be another marker of human evolution that differentiates man from other mammals.”

Still, removal of the uvula doesn’t appear to cause any long-term effects and can actually help reduce snoring or irritation where the uvula is especially large or long. So while it may be used in speech, it doesn’t appear to offer a critical function.

Why Don’t Cats Have Uvulas?

Considering that we don’t entirely know the purpose of the uvula, determining exactly why our cats don’t have one can be tricky. From my research, the best guess is that because the uvula appears to be connected to speech our feline friends never developed the need for one.

The uvula produces a ton of salvia which helps keep our vocal cords from drying out when we talk and this just isn’t a problem that other animals, like our cats, need to worry about. The uvula’s connection to speech is further supported by the uvula’s role in making some specific sounds. These are actually called uvular consonants and while they aren’t used very frequently in English, many other languages use them.

So while we can’t say for sure why our cats don’t have uvulas, the best explanation is probably because they can’t talk so they never needed this organ!

As far as we know, it’s just humans. While there haven’t been a massive amount of studies on the uvula across different species, otolaryngologist Yehuda Finklestein of Tel Aviv University looked for uvulas in nine different types of animals. Most animals didn’t have anything even close to a uvula but some baboons did appear to have an underdeveloped uvula.

While this could make things even more confusing, it does suggest that somewhere along the lines of human evolution, the uvula helped set up apart from other primates.

They’re distinctly humans and appear to be related to speech, which is probably why our cats don’t have them, but their true function is also a bit of mystery. Especially when you consider that people can have them removed with little to no long-term impact.

But one thing is clear: our cats definitely do not have uvulas so there’s no need to try and look inside your cat’s mouth to double-check!

I’m sure your cat will much prefer you reading this article to learn more about them instead of exploring the inside of their mouth!