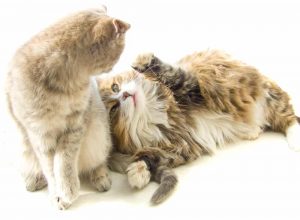 Declawing is steadily decreasing as a practice across the entire globe- which is great! It also means that some households that previously declawed their cats may be adopted new feline friends that have their claws.

But is there any issue here? Can declawed cats and cats with claws live together?

Declawed cats and cats with claws can successfully live together. Instead of claws, the bigger issue is providing a proper introduction and a harmonious household so that cats aren’t driven to fight in the first place.

But let’s take a closer look at everything you need to know about “mixed claws households”.

We’re going to cover all the background information that you’ll need to know about successfully living with a declawed and clawed cat but let me start by sharing some real world experience when it comes to introducing cats.

I worked at one of the largest shelters in the United States for a decade and one of the most common ways of housing cats was in groups called colonies. These weren’t the well-established colonies that you see from cats around the world. Instead, these were several adoptable cats grouped together in a large room with plenty of cat-friendly furniture.

It’s not a perfect or permanent solution but it is the most practical. Fights were extremely rare in these settings and in most cases, it was simply a bunch of noise.

That doesn’t mean there weren’t cats that just weren’t cut out for “colony life” but these felines were few and far between. It also had nothing to do with whether cats were declawed or not and both types of cats successfully lived together.

Of course, it’s not a perfect representation of a home, but it does highlight just how rare dangerous cat fights really are.

While there was a mix of clawed and declawed cats in these colonies, there was one thing that was true about every single cat in these groups: they were all spayed or neutered.

Spay and Neuter Your Cats

In the wild, cats would typically fight over two things: territory and mates.

A proper introduction can help minimize the risk of territory-related conflict and spaying or neutering can eliminate a cat’s desire to fight over mates. When male cats haven’t been neutered, they’re constantly on the hunt for a new mate and when females haven’t been spayed they’ll go through regular heat cycles where it seems like their only goal is to eat and attract a mate.

But this isn’t a girl cat meets boy cat and they live happily ever after kinda story.

Spaying or neutering your cats will eliminate a massive reason for cats to fight and go a long way to creating a fight-free introduction. But the benefits of spaying or neutering go well beyond a harmonious household and you can check them out here.

Simply put, before you introduce a new cat into your home, make sure your cats are spayed or neutered- regardless of whether they’re declawed or not.

If your cat still needs to be spayed or neutered, you can check out Pet Smart’s directory of low-cost options.

Start With A Proper Introduction

Even if cats are spayed or neutered, conflict can still arise. But introducing cats doesn’t have to result in a fight and if cats never scuffle then you’ll never need to worry about which cat has claws and which one doesn’t.

That means our goal is to provide a slow and stress-free introduction for both cats. In order to pull that off, the first thing we need to understand is that cats are naturally territorial creatures and they aren’t always great at sharing anything.

Because of this, introductions can be pretty complex- a lot more complex than introducing a dog to another dog for example.

Cats need to feel secure in their territory and introducing a new feline could quickly be seen as a threat before it’s seen as a friend.

Best practices for proper introductions is a topic that’s big enough to justify its own standalone article so it’s beyond the scope of this one. But to get started, I highly recommend that you check out this video from cat expert Jackson Galaxy for just about everything you need to know:

Armed with this knowledge and spayed or neutered cats, you’re well on your way to a harmonious household regardless of which cats have claws or not!

Do You Need To Introduce Clawed and Declawed Cats Differently?

The introduction video goes into everything you need to know about successfully bringing home a new feline friend but it doesn’t specifically address the declaw vs claw question.

So do you need a different type of introduction in mixed-claw situations?

Nope, everything that applies to a normal feline introduction applies when cats are clawed or declawed too. The dangers of cat fighting are always concerning and there’s not something special that needs to be done specifically for declawed cats or clawed cats.

Most Cats Don’t Want To Fight

While it’s going to vary between individual felines, most cats won’t actually want to engage in a full-on fight which should give you some peace of mind.

If you think of it from a strictly biological and evolutionary perspective, fighting is a dangerous idea for the health of the species. If every time there was conflict it ended in a massive fight, there’s a good chance that species would have a harder time surviving and thriving.

That partially explains why cats have so many distance-increasing and fight preventing behaviors the most famous of which is the hiss. Hissing cats don’t want to fight and you won’t see a cat that’s focused on going on the offensive hiss. Instead, it’s a cat’s way of saying, “Hey! You need to back off because I’m getting mad!”

Unless cats are cornered, which is definitely not a part of a proper introduction, fights can usually be avoided.

What If Cats Still Fight?

Even with the most diligent and patient feline introductions fights can still happen.

So what can you do about cats fighting and should you worry?

Nail caps are usually vinyl covers that go on top of a cat’s claws. There are primarily designed to manage destructive scratching of furniture but they can also be used to prevent cats from scratching people or in this case each other.

Nail caps are one of my favorite alternatives to declawing and not only can they help put cats on a more even footing in terms of claws but they’re also a great way to protect your furniture if you’re introducing a clawed cat to previously declawed only household.

Cat bites are dangerous to both humans and cats. The deep puncturing power combined with a bacteria-filled cat mouth is an extremely dangerous combination. Everything possible should be done to prevent a bite from occurring.

But take some relief knowing that with proper introduction and spaying or neutering the chances of a cat bite occurring are very low.

I know, that might sound like a mixed message here but the point is cats swatting at each other will rarely cause a major injury.

Similar to hissing, swatting is usually considered a distance-increasing behavior as cats stretch their paw out as far as possible to let their perceived threat know that they mean business. But it isn’t a very damaging attack.

Not all cats are going to friends- that’s just the way it is.

But with enough territory, even cats that aren’t exactly friends can still coexist. Your most obvious choice is cat-friendly furniture like cat trees but you already know that cats can make a bed out of just about anything.

Make sure you don’t make the mistake of only thinking about things horizontally and instead you’ll need to consider all the vertical options that cats have as well.

Then there’s the consideration of food and water sources. Not only do cats enjoy multiple locations for water but your declawed cat certainly doesn’t want to compete with their clawed companion for a drink of water.

Okay, so we’ve made it past introductions and now our declawed and clawed cats are living in harmony…at least for the most part.

But what about playtime? Can declawed cats and clawed cats safely play?

Cats are extremely skilled at controlling their power and their claws- they’re also great at telling other cats when they’ve crossed the line. That means there’s really nothing to worry about when declawed and clawed cats play.

Many of the bats and swats you see between cats are actually done completely without claws. Unless claws are allowed to grow too long, cats can easily retract them for playtime.

If you already have declawed cat at home and thinking about bringing home a new cat you should consider adopting a declawed cat!

I’m strongly against declawing cats but I’m 100% for helping them find homes! If you haven’t already picked out your new cat, then you can check out local shelters for declawed cats up for adoption. You may be surprised just how many cats there are that are already declawed but still need homes.

In many cases, shelters will happily let you know not only what cats that currently have in care without claws but also notify you when a declawed cat enters the shelter.

That’s everything you need to know about maintaining a “mixed claw” household.

At the end of the day, it’s typically not a problem, and cats with claws can not only live with but also play with declawed cats safely. Cats that are spayed or neutered have a much better chance of getting along with each other and from there it’s all about setting cats up for success with a proper introduction.

Of course, individual personalities will come into play, and some cats are going to have a hard time living with any cat, but the vast majority of the time you won’t have a problem mixing clawed cats with declawed cats.