Skip to content
Written by Logan Michael in Behavior last updated July 2021
BetterWithCats.net may earn a small commission when you use one of the links on this page to purchase. 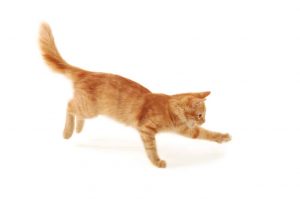 If you’ve done any research on declawing, then you know that the procedure is a lot more than just the removal of a few nails. Instead, it’s a very significant and permanent surgery that can change how cats walk, run and jump.

Still, cats are adaptable and most will find a way to still act like normal cats including hunting mice and even climbing now and again.

But does that include jumping? Can declawed cats still jump?

Declawed cats can still jump but they won’t have the same jumping ability compared to a cat with claws. Front claws will decrease a cat’s jumping ability some but losing back claws as well will make the biggest impact.

There’s a lot more to look at here and the ability for a declawed cat to jump will really depend on the individual feline so let’s look at all the possible factors.

What (Exactly) Is Declaw Surgery?

The first thing to note is that it really is a surgical procedure. Because of the name “declaw” it can almost seem like it’s some kind of really close nail trim.

But in reality, the entire last knuckle of a cat’s toe bone is removed in order to completely excise the claw and the claw bed. That’s the only way to actually remove the claw and in some cases the claw may actually grow back if the entire bone isn’t removed.

For comparison, imagine having the last knuckle of each hand completely removed. Sure, that would take care of your nails but you’re also losing a lot more. That’s not hyperbole either, and that’s an accurate representation of declawing in cats.

It’s no surprise then that the procedure can impact everything a cat does from climbing, hunting, and of course jumping.

But just to be clear, declawed cats can jump however it’s not going to be the same.

Again, imagine you’ve lost the last knuckle on every hand.

Could you still type on a keyboard?

Yes, you probably could but you aren’t going to be very good at it. That same is true for cats and while jumping isn’t as knuckle dependent as something like typing it’s still going to make a big impact.

How High Can A Cat Normally Jump?

Let’s get some perspective by first figuring out how well a cat can normally jump. According to PetFinder, “your average house cat can achieve a vertical jump to a height of five feet or more (without running), which may be as much as seven times her own height.”

That’s pretty impressive, especially when you consider the height of that jump compared to your cat’s height. Imagine if humans could jump as much as seven times their own height!

How High Can A Declawed Cat Jump?

If a clawed cat can jump as much as 5 feet in the air, what can a declawed cat do?

It’s hard to say with certainty since there will be quite a bit of variation between individual cats. There’s also the big difference between cats that are front-only declawed compared to cats that have been declawed on all fours.

While there are some declawed cats that can jump just as well as their clawed counterparts, that won’t be true in every situation or for every cat. In general, it’s fair to say that the average declawed cat is about half as effective at jumping compared to your typical clawed cat.

Why Are Declawed Cats Bad At Jumping?

We’ve talked extensively about how declawed cats are bad at jumping but why exactly is this the case?

Let’s look at the 5 biggest factors that impact a declawed cat’s ability to effectively jump.

1. Declawing Can Be Painful

Not only is declawing painful at the time of surgery, but it can also cause long-lasting pain and behavior problems.

When the last portion of the toe is removed, cats are suddenly forced to walk in a way that they never would have before. If we go back to our comparison of what declawing in humans would look like imagine that you’ve lost the last third of your finger.

Could you still type on a keyboard?

Probably, but you likely wouldn’t be very excited about it. In fact, it may even hurt quite a bit.

The same can be true for cats and even though they can still jump the action is more painful as a result of declawing so they may just be less inclined to do it. Compared to other activities, jumping can be a relatively high-impact activity, and not only is there a lot of force generated when cats leap into the air but they also have to endure the impact of landing.

Because both aspects of jumping will be a lot more uncomfortable if cats are suffering from chronic pain, they may choose to jump less.

Things can be much worse if the declaw was done poorly and the guillotine-style declaw has a reputation for leaving behind bone fragments. Studies have found that the presence of these bone fragments significantly increased evidence of back pain as indicated by changes in x-rays along with other negative behaviors.

That doesn’t mean every declawed cat is in pain all the time. But with what we know about declawing, it’s reasonable to believe that declawed cats are going to be less excited about jumping on their potentially painful paws.

There are dozens of physiological adaptations that help cats jump higher and farther than most animals. From specific muscle insertions and muscle fiber types to improved flexibility in key joints, cats are amazing jumpers.

Even though they may not get as much attention as other adaptions, a cat’s back claws also help with jumping ability.

Imagine you had to jump from a standing position in a grassy field while wearing cleats. Even though grass can be slippery, you’re probably going to feel pretty confident with your cleats on.

Now instead of grass and cleats, imagine you had to do the same jump standing on a smooth floor…that’s also covered in butter. Oh, and you’re missing a few toes as well!

The example is a little over the top but it does highlight the problem. Without back claws and part of their toes, cats don’t have the same ability to grip. With a worse grip comes a decreased ability to produce power.

If you’ve ever had a clawed cat jump off you then you’ve felt this first hand. But you can also see this in action in the video below.  Watch as the cat leaps off the edge and keeps their back claws in place.

Just because declawed cats can jump doesn’t mean they have the confidence to do so. We’ve already seen that as a factor when we look at the potential pain that declawed cats face but the lack of front claws can cause a similar issue with confidence.

Generating enough power to make the jump is critical but a cat also has to land! If they don’t think they can land, they probably won’t make the jump and without front claws controlling your forward movement can suddenly become a lot more difficult.

Not only that, but with the last third of their toes missing, cats will have a harder time gripping the ground during a landing.

I don’t want to turn this into a physics lesson but in most cases a greater surface area or contact area allows for greater production of force. More force means a higher jump.

When you consider that declawed cats have lost roughly 30% of the size of their paw, it’s no surprise that they may have lower surface area compared to fully clawed cats. This particular explanation doesn’t have anything to do with claws specifically but instead, the issue is that in order to remove the claw veterinary surgeons also have to remove a large portion of the toe leaving behind a smaller foot that can generate less force.

Not only does a loss of 30% of the toe result in a decrease in the ability to generate force but it also means that declawed cats will typically have significantly worse balance. It’s the same way that cat trees with a small base are more wobbly.  While cats aren’t as tall as a cat tree, their paws still provide a base of stability.

Claws can also help with balance since they can help cats “lock in” to the ground around them. It’s similar to the way a hand railing can help you from falling down a flight of stairs or how when people fall they tend to reach out and grab whatever they can. Claws can help in the same way and assist cats in quickly finding balance.

But stuck without claws and smaller paws a declawed cat’s balance will suffer which will affect every aspect of jumping from start to finish.

Declawing can really change a lot about a cat. While the name would suggest some kind of super-powered nail trim, the reality is that the removal of the last third of the toes can change a lot.

Everything from increasing the frequency of house soling behavior and biting to of course the ability to jump…declawing is a big deal.

While adaptable declawed cats can still do almost everything that a clawed cat can, from catching mice to climbing trees, it doesn’t mean it’s done pain-free or to the same level as their clawed counterparts.

Thankfully, declawing is decreasing in prevalence, and with so many effective alternatives available there’s really no reason to keep declawing cats!

link to Why Does My Cat Slap Me with Their Tail?

Wondering why cats slap you with their tail? We have 4 simple reasons to explain this cute but confusing cat behavior!

Continue Reading
link to Why Does My Cat Bite My Dog’s Neck?

Wondering why some cats love biting the neck of their canine companion? We have 5 simple reasons to explain this behavior!