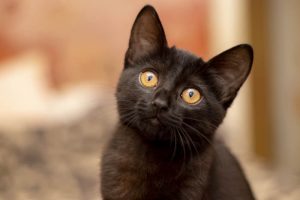 Our cats have some strange habits and most of them are actually pretty cute.

But when it comes to things like urinating on furniture, clothing, or other household items like plastic bags our cat’s habits are anything but cute!

Not only can this habit seem surprising to many cat parents, but the range of items cats will pee on can also be confusing! One of the most popular seems to be plastic bags. Many cats seem to have a fascination with plastic bags whether it’s playing with them, licking them, or unfortunately peeing on them.

But why do cats pee on plastic bags? Assuming there’s not a medical explanation for why a cat is urinating outside the litter box, cats may be attracted to the smell of certain chemicals in the plastic, the texture, and sound of the bag or because it’s simply the best alternative to the box at the moment.

Let’s dig a little deeper into each of the explanations starting with the most important consideration first.

Is There A Medical Issue?

When cats urinate outside the box, whether that’s on a plastic bag or anything else in the house, there may be an underlying medical problem that needs to be addressed. If your cat has suddenly started urinating plastic bags, the first call you make should be to your veterinarian.

While a variety of conditions can cause cats to urinate outside the box and on items like plastic bags, the most common fall under the category of feline lower urinary tract disease or FLUTD. FLUTD is actually a collection of conditions like urinary tract infections and bladder stones. Other diseases that fall under the FLUTD umbrella have no apparent cause and are referred to as idiopathic cystitis cases– which is just a fancy way of saying we don’t know what’s causing these urinary issues.

Once a cat is suffering from FLUTD, all kinds of strange behaviors can take place including urinating on plastic bags. Cats may have a painful experience urinating in the litterbox as a result of a painful stone and decide that a litterbox is no longer a safe place. They’ll then try different surfaces and for the reasons we’ll cover below, plastic bags are often at the top of the list.

In other cases, like a urinary tract infection, cats may have a powerful urge to frequently urinate and might not feel they can make it to the litterbox. Again, the texture and smell of a plastic bag make it a great option.

Of course, there are plenty of behavioral reasons for a cat to urinate outside the box too and that’s what the rest of this article will focus on. But ruling out medical concerns should always be the first step when our cats decide to pee anywhere strange.

Plastics are full of chemicals and compounds that we don’t even notice but our cat’s powerful sense of smell certainly seems to be able to pick them out!

Some chemicals in plastic bags can mimic the smell of pheromones. These pheromones can lead cats to have all kinds of different reactions from simple curiosity to even urinating on them so they can replace their own scent with whatever strange animal smell they associate with the plastic bag. The folks at Canidae explain, “Some plastics have other chemicals in them that have interesting smells which can attract cats. It’s possible that cats detect a smell that mimics pheromones. Licking the plastic could cause a flehmen response, and could also be why a cat will urinate on a plastic bag.”

This isn’t the first time that cats have been fooled by a modern chemical though! Many cats are actually attracted to the smell of ammonia and chlorine because both of these chemicals seem to smell like cat urine to our feline friends. Ammonia makes sense (since it’s in urine) but chlorine is certainly a little strange!

But it’s not only pheromones that could be motivating our cats. Most plastic bags contain animal fats which are used in the manufacturing and production process. According to veterinarian Arnold Plotnick, it’s possible that cats can smell the animal fat in plastic bags which can lead to licking, sitting on plastic bags, or even urinating on it. This can also explain why cats may choose to lick some types of plastic like shower curtains.

It’s possible that cats enjoy the texture and sound of the plastic bag. While it might seem strange to imagine that our cats would enjoy something as unnatural as a plastic bag for such a natural process, it starts to make some sense when you really break it down.

Cats have a natural instinct to bury their poop and litter makes a great choice for this since it’s easily moved around by our cats. While it might seem like a stretch to some folks, it’s not too difficult to see how a plastic bag might have a similar feel to something that cats could use to cover their stool. A plastic bag will certainly move when your cat paws at it.

There’s also a chance that the crinkly noise it makes only further interests our cats- we’ve already talked about why our cats love crinkly noises but consider the sounds of leaves being rustled by your cat to the sound of a plastic bag being pawed at.

Not that different, right?

So it’s possible that cats just prefer the plastic bag as a bathroom compared to other options.

If you’re using litter box liners, or your cat has in the past, they may also associate the smell, sounds, and texture of those plastic lines with their bathroom!

Reason 3: Your Cat Likes The Smell

While it might sound similar to our first reason, it’s possible that plastic bags have interesting smells that have nothing to do with the plastic they’re made of.

Two things are going here: first, plastic has a tendency to hold onto the smell of whatever has been inside it, and second, plastic bags are obviously used to carry things! I know, this isn’t breaking news but when you consider the chemical smell plus the smell of whatever you carried in the bag it shouldn’t be much of a surprise that cats are interested in plastic bags.

In some cases, this may lead them to pee on the bag as they try to cover up the strange combination of smells and claim their territory.

In some cases, your cat may just decide that peeing on the plastic bag is the best option at that moment. While a combination of the reasons above could be a factor if cats have a bad experience at the litterbox they may decide that plastic bags make a better bathroom.

The tricky part is defining a bad bathroom experience for our cats!

There are obvious issues like a conflict with another pet in the house but some cats are also just very sensitive to a dirty litterbox. There are also cases where cats develop a preference for smoother surfaces when it comes time to use the bathroom.

It’s Probably Not Just One Reason

As is often the case with strange cat behavior, there’s probably not just one behavior to explain why our cats do the things they do. It’s often a combination of reasons that all work together to push our cats into a certain direction.

For example, let’s say there was a loud noise the last time your cat was in the litter box. That would make the litterbox a little less appealing. The smell (both chemical and otherwise) of the plastic seems interesting to your cat and they decide to paw at it a few times and find that it doesn’t seem like a bad spot to pee!

Everything comes together to draw our feline friend to take a tinkle on the plastic bag!

How to Stop Cats From Peeing On Plastic Bags

Sadly, behavior problems are the most common reason for pets to be brought to already crowded animal shelters and urination on plastic can certainly count as a behavior problem for many folks. While urinating on plastic bags is generally much less problematic than urinating on clothing or furniture, it’s still an issue and in some cases can lead to further house soiling.

While every case is a little different, there are a few things to consider when trying to break the plastic bag habit. but if you’re having problems with your cat urinating on more than just plastic bags, you should check out this detailed guide to inappropriate urination by VCA Animal Hospitals.

As I said at the start of this article, there are several medical reasons why cats may start urinating in unusual spots and this is almost always the first place to start.

Not only is this important for the overall health of your cat but if left untreated medically-motivated urination can eventually become a behavioral preference. For example, some cats may start urinating on plastic bags as a result of a UTI that’s causing them to urinate frequently but over time they may actually prefer the plastic bag. That means they’ll continue urinating there even after the UTI resolved!

So unless there are extremely obvious behavioral issues (like another pet actively guarding the litterbox), you should always start with your veterinarian.

Yep, it could be that easy and if it is then you’re lucky! If your cat is only peeing on plastic bags, and not other areas of the house, then it’s best to simply ban bags from the house. Go with paper before your cat develops a real habit!

What you don’t want to do is try to punish your cat for urinating in unwanted places. Techniques like spraying your cat with water are ineffective and pretty confusing for your cat. It’s very difficult to get your cat to understand that urinating on the bag is the issue and not urinating itself.

What you definitely don’t want to do is lead your cat to believe that urinating is bad behavior!

Our cats do weird things and while it’s easy to just say that cats pee on plastic bags because they’re cats (and that’s what cats do), it’s fair to assume that there’s a good reason why cats take on this strange behavior.

Of course, the first thing we want to rule out is medical issues. But once we know that our feline friends are healthy and fair to say that a combination of chemicals and other smells are probably the most compelling reason for our cats to pee on plastic. The leaf-like sound and texture don’t hurt either!