Skip to Content
Written by Logan M. in Behavior last updated November 2020
BetterWithCats.net may earn a small commission when you use one of the links on this page to purchase.

Okay, it might seem like a silly question but it’s one I’ve been asked before. Maybe you’re embarrassed to ask but with modern science and the resiliency of nature, almost anything seems possible so many people can’t help but wonder…

Can dogs and cats mate? No, cats and dogs are too different to mate and produce offspring. Even though different species sometimes can produce hybrids (like lions and tigers) they have to be very closely related and it just isn’t possible in the case of cats and dogs.

When it comes to cats and dogs, it’s best if they just stay in the friend-zone but let’s talk about exactly why it isn’t possible for them to mate and reproduce.

Why Can’t Cats and Dogs Make A Hybrid Species?

At first, the question of whether or not cats and dogs can mate might seem a bit out there but if you spend any time looking across the animal kingdom you can see why it might not seem so far fetched.

For example, a liger is a combination of both a tiger and a lion which are two completely different species. Sure, they’re both part of the Felidae family but they’re still different animals with different habits, social structures, and very different environments.

While ligers typically occur in captivity there are many hybrid species that can occur in nature including whale hybrids, grizzly and polar bear combinations, and a hybrid of different Galapagos iguanas.

There have even been hybrid humans when Neanderthals interbred with humans as recently as 40,000 years ago!

So how is all this possible but cats and dogs can’t mate?

Well, without getting too technical, it comes down to the DNA of the two species. Science Direct explains that “hybrid DNA is formed from complementary single DNA strands from two different parental molecules. The parental molecules must be homologous with each other, that is, they have the same sequence of base pairs overall.”

So species that are different but still closely related, like lions and tigers or polar and grizzly bears, have the same sequence of base pairs which means a hybrid is possible. But cats and dogs don’t which means they can’t produce offspring even if they did figure out a way to mate.

People have been intrigued at the idea of cat and dog hybrids for centuries and there have been hundreds of fake stories about cats and dogs suddenly being able to reproduce. But one of my favorites is the April Fool’s joke out from Catster in 2009.

They released a well-written article explaining that Cornell University had finally been able to successfully combine cat and dog using DNA sequencing. Here’s the photo they included with the article: 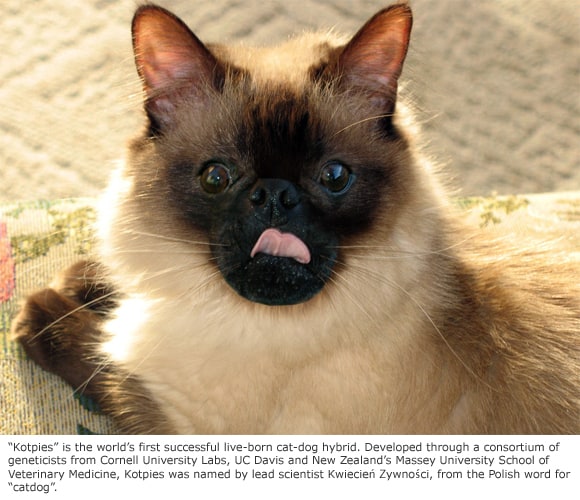 Catster claims that this is a hybrid of a pug dog and a Siamese cat. You’ve got to give up to Catster for going all-in on this joke as they even included some detailed genetic mumbo-jumbo about how they were able to make this made-up hybrid a reality!

Why Do Dogs Try To Hump and Mount Cats?

Okay, if dogs and cats can’t have babies together why do so many dogs try to mount cats? While the act of mounting an unassuming cat might really stand out to us humans let’s not forget that dogs do all kinds of weird things.

I mean, how weird is rolling in poop or smelling every butt they can find? But one thing at a time and let’s start with the mounting.

Why Do Dogs Mount and Hump Anything…Let Alone the Cat!?

While your first thought might be that the dog is trying to mate with the cat, mounting and humping are also done by female dogs. The fact is, dogs mount and hump for a long of reasons. Sometimes they’re just so excited that they don’t know what else to do and that excitement comes out in the form of humping toys, furniture, your leg…or even the cat. In other dogs, it’s a sign of stress, anxiety, or even boredom.

It’s hard to say for sure why dogs hump and mount but one of the most popular theories has to do with dominance. The idea is that when your dog humps the cat, they’re showing a form of dominance but behaviorists aren’t in agreement on this. Peter Borchelt, a Certified Applied Animal Behaviorist explained to The Bark that  “Mounting could be part of a suite of behaviors associated with aggression, such as high posture, resource guarding, direct stares, and threats and standing over. But mounting, in and of itself, doesn’t indicate a status issue. By itself, mounting might not mean a lot”

That means that each dog might have a slightly different reason for mounting and humping the cat and the whole thing might not mean much at all. But we can say for sure that dogs aren’t doing it for the purpose of reproduction and it’s not possible for cats to actually reproduce with dogs.

How To Stop the Behavior

But if your dog is constantly trying to mount and hump the dog it can get more than a little annoying.

The first thing you need to try and figure out is why the dog is trying to hump and mount the cat. The most common reason I see is either boredom or excitement. Luckily, these have the same solution.

You’ll want to redirect your dog’s excitement or satisfy their boredom with a toy. My favorite is this silly-looking sloth toy on Amazon from the folk at BarkBox but any toy that your dog likes will work. The idea is simple: instead of allowing your dog to hump or mount the cat instead redirect their attention to the toy. Just to be clear, we don’t want the dog to hump the toy! Instead, we want to encourage them to play with the toy appropriately.

This technique is called redirecting the behavior because we’re encouraging the dog to engage in more appropriate behavior in favor of a negative one.

What About Cats? Do They Try To Mate With Dogs?

It’s not just dogs that are making people think that cats and dogs might be able to have babies. Cats are at fault as well though it’s typically a lot more subtle than straight out mounting. Hormones are a powerful thing and a female cat in heat will act pretty crazy including trying to “present” themselves in front of a dog.

If you’re wondering what this looks like you can check out this video on YouTube. It’s actually pretty funny because the dog doesn’t want anything to do with this cat and seems like he just wants to peacefully sit on the bed.

Spay and Neuter Your Pets!

Even though cats and dogs can’t reproduce with each other much of the unwanted behavior we’ve talked about has to do with animals that aren’t spayed and neutered. If cats are spayed, they no longer go into heat and that poor dog can enjoy the comfort of the bed in peace. Most dogs will hump and mount less after neutering as well but there are also a long list of other benefits.

If you need to spay or neuter your pet without spending a fortune, PetSmart has an awesome list of low-cost clinics!

While cats and dogs can’t actually mate and reproduce, it’s still fun to think about what a litter of kuppies or pittens would look like!

Would they bark or purr?

We may never know but luckily nature has already provided us with a long list of amazing hybrids to explore and learn about!