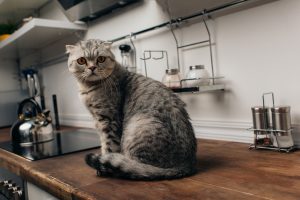 Most folks try to put the litter box as far away from the rest of the house as possible and while that seems like a good solution for humans it’s not always great for cats.

Sure, cats want to use the bathroom where they’re not likely to be disturbed but that doesn’t automatically make the further corner of the garage the best location for a litter box. Because litter box breaks have a lot to do with marking territory, cats may actually prefer that their litter box is in a socially significant location where people are likely to spend some time.

And there are few areas in the home that are more socially significant than the kitchen…but does that make it a good spot for the litter box?

Can you put a litter box in the kitchen?

You can place a litter box in the kitchen but it shouldn’t be your first choice due to the potential for increased risk of food contamination, especially from toxoplasmosis. However, preventing cats from jumping on counters and careful placement within the kitchen can reduce the risk. Still, there are usually better options than the kitchen.

That’s the snapshot answer but let’s look a little closer at the pros and cons of placing one of your cat’s litter boxes in the kitchen along with how to successfully pull this off!

Is It Safe To Keep A Litter Box In The Kitchen?

Before we consider anything else, we first make sure we’re not putting our health at risk by trying to squeeze a litter box into the kitchen. However, please note that I’m not a physician or a veterinarian so nothing in this article is considered medical advice for people or pets.

So what’s the potential risk of placing the litter box in the kitchen?

The biggest concern is the contamination of food with feces from the litter box and for people with a compromised immune system the litter box most certainly shouldn’t be in the kitchen. Cats can carry a wide range of internal parasites in their stool ranging from giardia and coccidia to worms like roundworms and tapeworms.

But the biggest concern is toxoplasmosis which is a disease that affects both cats and people and can cause a wide range of symptoms including fever, lethargy, and loss of appetite. While the disease rarely affects otherwise healthy people, it can be a major risk for immune-compromised people and pregnant women.

The disease is most commonly spread through the ingestion of the toxoplasmosis cysts and while there’s currently no evidence that airborne transmission is possible placing the litter box in the kitchen could increase risk.

On top of that, many of us sleep with our cats, and nighttime cuddling is one of the many ways that we show them our love! But those midnight cuddle sessions could also be spreading toxoplasmosis cysts. Granted, you’re not eating your pillow but I’m only pointing out that the risk is present regardless of where the box is kept.

At the end of the day, you’ll need to decide if you’re comfortable with the potential risks and talk to physical if you’re unsure.

What Are The Benefits Of Placing The Litter Box In The Kitchen?

We’ve already looked at the biggest downside of placing the litter box in the kitchen but is there any upsides to this?

Most definitely, let’s look at a few!

A lot of folks assume that cats want privacy when they use the bathroom but that’s not likely the case. Instead, those are probably just human preferences that we’re pushing onto our cats.

The biggest difference is that for our cats, their bathroom breaks are sending a message. Urine and feces are used to mark territory and while most of our cats don’t need to worry about fending off potential invaders in the safety of our homes that instinct is still active.  That’s partially why some cats choose one box for urine and one box for feces and while that may seem strange to us it’s all part of the plan for cats.

What does this have to do with the kitchen?

Well, cats want to claim good territory with their strategic bathroom breaks. As Jackson Galaxy explains, that means socially significant areas where people spend a lot of time. That definitely doesn’t mean the garage but it does include areas like the living room or kitchen.

So while cats may not enjoy times when the kitchen is particularly busy, they will appreciate the opportunity to claim their turf in a very important part of the home.

It May Be The Only Option

In small spaces, the kitchen could be the best choice and either the only option or at least better than the alternative.

Some cats love to scratch the sides of their box and generally complete a full checklist of digging before they use the bathroom. That can end up making a lot of noise and it’s a good reason to avoid the bedroom for the litter box.

The bathroom is almost always the better choice and you can usually find litter boxes that will fit in even the smallest bathroom apartments but I know that’s not always the case!

So in some situations, you may not have any other choice besides the kitchen.

What Are The Cons Of Keeping A Litter Box In The Kitchen?

We’ve already looked at the biggest and most concerning potential downside to keeping the box in the kitchen which is possible disease transmission. But let’s take a look at a few other concerns.

Litter box smell will always be an issue but the last thing you want right before you finish cooking dinner for 2 hours is to smell your cat’s poop.

While there’s never really a good time to smell a cat poop, it’s probably not right before you eat. Cats often seem to have impeccable timing with their poops and love to hit the box whenever I have company over.

Even if your guest is a committed cat lover, they may not want to experience the mix of cat stool and dinner. There are always ways to reduce smells and some cat litters do better in small spaces than others but with such a central location, it will be hard to completely eliminate them 100% of the time.

Kitchens May Have Too Much Activity

We’ve already talked about how cats prefer an area with some social significance but that doesn’t mean they want to poop surrounded by chaos!

If you’re washing dishes or making a sandwich, it’s unlikely that most cats are going to care much. But if you have kids that are constantly coming in and out of the kitchen,  dogs that are full-time food beggars or you’re trying to make an entire Thanksgiving meal then it could cause problems for your cat.

Cats usually don’t mind a little activity but things can easily cross the line in an active kitchen.

Where In The Kitchen Is Best?

You have a handful of options for where you place the box and let’s look at a few of them.

In The Corner Of The Kitchen

This is the simplest but also my least favorite option. You’ll only want to go this route if you have no other space since not only will the litter box be visible while you’re eating and cooking (which could be a turn-off from a cleanliness perspective) it will also be in the way.

To save space and reduce litter spreading through the kitchen, I highly suggest a top-loading litter box if you need to go this route. I recommend this one from IRIS which has more than 16,000 five-star reviews on Amazon that you can see here. The top-loading design will drastically save space while still preventing litter from spreading.

This is my go-to recommendation if you need to place the litter box in the kitchen assuming you have room to clear out a floor-level cabinet and dedicate it to a litter box. This is similar to my favorite spot for placing a litter box in the bathroom and the idea is to leave the cabinet slightly ajar to allow for 24-hour access.

You can go for a more creative option if you’re crafty but the simplest solution is to use a hinge that doesn’t close automatically like these on Amazon. Not only will that allow you to leave the cabinet door open, but it will also make it easier for cats to open the cabinet on their own.

What’s great about this option is that you can easily add a litter-catching mat or any other system to reduce the spread of litter. The box will also be out of the way and out of sight. You’ll still need to deal with the smell problem but even that will be more under control with the box in an enclosed space.

The big downside here is the risk of accidentally closing the cabinet and leaving your cat without a litter box for any period of time.

Your last option is the pantry. The viability of this option will vary greatly based on the size of your pantry but even the smallest pantries usually have a small space on the floor where a litter box can fit. Often times this spot is intended for a trash can but if you find another spot for the can you can use it for the litter box.

Similar to using the cabinet for the litter box, this strategy keeps the box out of sight and out of the way but you’ll still need to contend with the smell and make sure to keep the door slightly open.

Consider Other Options Before The Kitchen

While placing the box in the kitchen can work, it shouldn’t be your first choice simply because mixing feline bathroom breaks and food preparation is generally a bad idea. It’s the same reason why trying to clean the litter box in the dishwasher is a no-go option.

Of course, there’s a big difference between having the litter box stashed in the kitchen cabinet and adding it into your dishwashing routine but the concerns are the same.

So be sure to consider other options before choosing the kitchen for your feline friend’s litter box.

I know that some people will be completely shocked at the idea of keeping the litter box in the kitchen but it can work. And when it comes to small apartments or studios there’s sometimes no other option.

What do you think? Are you going to use the kitchen as one of your litter box locations or will you opt for a more traditional spot?