Skip to Content
Written by Logan M. in For Behavior last updated November 2020
BetterWithCats.net may earn a small commission when you use one of the links on this page to purchase. 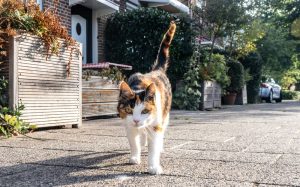 There are lots of things that cats can do that we rarely see them do. And if you’re anything like me, this usually leads to a frantic shower thought when you wonder things like…

Can cats walk backwards?! Yes, they absolutely can but rarely choose to do so. One of the big reasons is that cats are very visually focused and the idea of moving in a direction they can’t see in goes against their basic instincts.

And if you just want to see a cat walk backwards, check out the amazing Didga showing off her backward walk during her world record series of tricks!

While we might think of our cats as little fury apex predators, they also evolved as prey animals that had to constantly be aware of their surroundings. Cats are extremely visual creatures with powerful eyesight but they need to be oriented forward in order to use their amazing vision.

Walking backwards would give up one your cat’s most powerful senses! But it’s not just their eyes that keep them aware of their surroundings. Your cat’s long whiskers are basically a superpower that can help them sense the world around them. Even giving them the ability to feel current changes in the air to locate movement.

Finally, there are your cat’s ears that contain more than 30 muscles to help your cat position the ear perfectly to pick up the sound. If you consider the shape of the ear you can see that it helps funnel sound into your cat’s ear canal.

Everything about your cat’s sense is oriented forward! Ears, eyes and whiskers it’s all focused on being forward-facing to get the most information possible. That means that walking backwards doesn’t leverage any of your cat’s powerful senses and leaves them vulnerable. That’s not something your cat is going to do very often!

When Do Cats Walk Backwards?

But all that doesn’t mean cats don’t ever walk backwards. There are several situations where a cat might be very likely to walk backwards!

Let’s take a look at a few of them.

The Cone of Shame

If your cat has ever had surgery there’s a good chance you’ve had to put on the dreaded cone of shame. Also called an e-collar, the cone helps prevent cats and dogs from scratching, biting and generally irritating their surgery site.

But it can also lead to cats doing some downright weird things, especially when it’s first put on their head. Often times, cats will slowly walk backwards as if they’re hoping they can “walk out” of the cone. After working in the veterinary field for more than a decade and seeing hundreds of cats with e-collars or cones I can say that most will walk backwards the first time they have one on.

As a side note, if you’re in a position where your cat needs to put on an e-collar I highly suggest you check out some of the newer models that get the job done but don’t actually prevent vision. They’re a bit more expensive but it’s generally worth it. I especially like this one on Amazon and even though it has a dog in the image, it’s small enough that it will work for most cats.

There’s another surgery related scenario where a cat might walk backwards and that’s immediately after surgery. When cats are coming out of anaesthesia they’re a little…drunk. Just like anyone else, they can have a hard time keeping their balance as they recover from the anaesthetic drugs. That can lead to some walking backwards as they try to find their footing.

It’s not the most graceful backwards walking and isn’t the elegant movement that you’d usually expect from our feline friends but we can’t blame them for feeling a little wobbly!

When There’s Nowhere Else To Go

Cats are well known for being curious and sometimes this curiosity leads them to try and squeeze into small or narrow spaces. Sometimes that means there’s no other way to get out besides walking backwards! You’ve probably seen this before but didn’t think much of it because you were distracted by whatever silly thing your cat was doing. I know my cat Debbie does this the most when she’s trying to crawl under the covers. Instead of attempting to turn around she just army crawls backwards out of the blankets!

One of my other favourite examples of this is the YouTube famous cat Sparta. There’s a great video of him exploring a narrow ledge and he decides that the only way to get back to where he started is by walking backwards. It’s pretty cute and you tell that cats are just not as skilled at walking backwards as they are walking forwards!

When They’re A Little Afraid or Surprised

We talked about how cats prefer to walk forward since it helps orient all their sense forward but if there’s something that they’re afraid of or particularly interested in they may actually walk backwards in order to the keep their focus on whatever has them interested.

In that case, cats want to keep their powerful whiskers, ears and eyes on whatever has then spooked while still keeping their distance. The most reasonable thing to do then is to walk backwards! I mention that this occurs when cats are a little afraid or surprised because a truly frightened cat wouldn’t hesitate to turn completely around and run.

Some cats have been reported to walk backwards after they’ve had a hind limb amputated. While I hadn’t heard about this before, the experts at Tripawds.com say that it’s pretty in common in cats. Tripawds.com is a website that’s dedicated to helping pet parents of three limbed cats and dogs and includes an active community where people can discuss the challenges (and solutions) for their three-legged furry friends.

They explain that “the backwards walk is an unusual amputation side-effect that sets Tripawd cats apart from dogs. Suddenly from out of nowhere, a new Tripawd cat will literally start walking or scooching backwards. They often flop and squirm on the floor and appear distressed.”

You can see a video of what they’re talking about here:

It’s unclear why cats are doing this and the community has only seen it in rear amputation cats. One theory is that the cat is having muscle spasms in their hind limbs and they’re trying to walk it out. But most pet parents report that cats give up the behaviour about a week or two after surgery.

What About Kittens- Can They Walk Backwards?

Yep, they sure can! Kittens are constantly learning how to move around efficiently and that can often lead to them doing silly things including walking backwards. It’s pretty common to see kitten walk backwards when they see something the surprises or startles them. I wouldn’t say that kittens are constantly scared but they’re pretty frequently surprised since they’re literally seeing everything for the first time.

That often leads to them trying to decide if they should back up or run forward! But either way, they generally keep their eyes focused on whatever has them interested.

So, Can All Animal Walk Backwards?

You might even be a little disappointed that cats can walk backwards. I mean it would be pretty interesting and quite the fun feline fact if they couldn’t walk backwards. But don’t worry, I’ve got a very short list of the two animals that can’t actually walk backwards! It’s a pretty exclusive club and they’re both from Australia!

Alright, so it’s questionable whether or not kangaroos walk at all since they’re well known for hopping everywhere! But whatever we call it, the fact remains that kangaroos can’t walk (or hop) backwards.

Emus are big flightless birds that look a lot like the classic ostrich. They’re well known for their speed and can sprint as fast as 30 MPH. But they’re also unable to walk backwards! It’s not entirely clear why they can’t but the general consensus is it has to do with the joint of their knee.

Should I Worry If My Cat Is Walking Backwards?

In most cases, a backwards walking cat isn’t a problem. But if it’s happening without any explanation then there might be an underlying illness at play. While you should always consult a veterinarian if you have a medical concern, let’s take a look at a few conditions that could lead to disorientation and possibly backwards walking as a result.

This disease can cause cats to become disoriented and engage in many strange behaviours including walking backwards from time to time as they try to find their footing.

The inner ear of cats helps them maintain balance and coordination. It’s the same way in humans and if you’ve ever suffered from vertigo then you know exactly the kind of chaos that problems with your inner ear can cause on coordination.

According to VCA Hospitals, the exact cause of the condition is not known but can sometimes be related to an ear infection. Symptoms can include falling or circling to one side, disorientation and vomiting among other things.

As you can imagine, a disoriented cat suffering from vestibular disease may also walk backwards.

There are also some toxins that can cause disorientation and lead to unstable backward walking. While you might immediately think of it as a toxin, alcohol can cause cats to lose motor function and stumble around. Cats aren’t going to be immediately drawn to the taste or smell of alcohol but if it’s mixed with something fatty like milk or cream there’s a chance a cat might be interested in giving it a try.

Yes! Cats can walk backwards even though they don’t do it very often! But there will always be some silly kitties that make it a habit of walking backwards just because they think it’s fun!

While walking backwards is rarely an issue, if you see your cat moving backwards while acting generally disoriented then it’s time to call your veterinarian.