Skip to content
Written by Logan Michael in Health & Happiness last updated August 2022
BetterWithCats.net may earn a small commission when you use one of the links on this page to purchase. 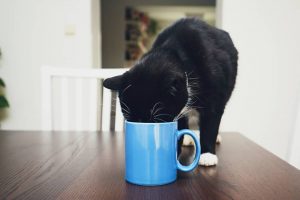 Whether you’re trying to come up with a unique treat for your feline friend or you’re doing some research after you found your cat taste-testing your apple juice if you’ve made it here you’ve probably got one question on your mind:

Yes, cats can drink a small amount of apple juice but because of its high sugar content, it shouldn’t be given to them on purpose. Instead, opt for a healthier liquid treat like bone broth or even tuna juice in small amounts.

But let’s learn more about apple juice and why it isn’t a great option for cats.

Starting with one important fact about your cat…

Your Cat Is A Carnivore

Cats are what’s called obligate carnivores which means they absolutely must eat meat in order to survive. In other words, there’s no such thing as a vegetarian cat and in the wild cats generally wouldn’t eat anything with carbohydrates- including apples and apple juice.

Why is this important?

One really interesting example of your cat’s carnivore past comes in the form of vitamin A. Humans are able to take the beta-Carotene present in carrots and convert that into the essential vitamin A. Cats, on the other hand, aren’t able to do this! Instead, they have to get their vitamin from animal sources like the liver!

So the first thing to realize about apple juice for cats is that it isn’t part of their natural diet or really even close to it. As a result, there’s a good chance apple juice could lead to an upset stomach as your cat isn’t able to effectively process the simple sugars.

But it’s not just stinky stools you have to worry about. Cats (and people) that take in too much sugar can quickly gain weight. Feline obesity is already a major concern for most cats and adding apple juice to your cat’s diet isn’t going to help!

What (Exactly) Is Inside Apple Juice?

Now that we understand what our carnivorous cats would typically eat, let’s take a closer look at what’s inside a typical bottle of apple juice using Tropicana as an example. Here’s a quick snapshot of what’s inside:

As we can see, apple juice is pretty much all sugar! Which is the opposite of what our cats should be eating!

But since a small amount of apple juice is okay, and there’s no way that cat would actually drink 10 oz, you might be thinking that it could still be a tasty treat for our feline friend, right?

This leads us to our next question…

If cats are obligate carnivores why would they even try to drink apple juice in the first place?

And if they do, would they like the sweet taste of it?

Actually, cats lack the needed taste receptors to actually taste sweet flavors! Which makes a lot of sense when you consider that our cats need meat and not sugar to survive and thrive! Nautilus, a magazine dedicated to scientific facts and discoveries, explains that:

“Taste buds have evolved among animal species to lead us toward those things that we need and lead us away from those things we are best off avoiding. For most mammals, the ability to detect carbohydrates is a matter of survival. Simple sugars taste sweet because we need them (or at least we did before we learned how to artificially produce them in abundance). That’s why most mammals experience the taste of sugar as pleasant, but house cats and other felines are indifferent to sweets.”

But we know that some cats do drink apple juice and other sweet treats…so why do they do this?

When it comes to sweet treats like ice cream, cake or similar items your cat is really attracted to the fat content. Most fat is sourced from animals and while your cat doesn’t care about the sweet taste of ice cream they are interested in the fatty flavors that result from the dairy.

But why would a cat drink apple juice that doesn’t contain any fat?

We can’t say for sure but it’s most likely that cats are just interested in trying something new. There may also be a flavor that we can’t actually appreciate that our cats can. However, when you consider that cats simply don’t have the ability to taste sweet flavors it’s safe to say that cats aren’t missing out on much when it comes to not drinking apple juice.

Even though your cat doesn’t need carbohydrates you might be wondering if a little apple juice is healthy for cats. After all, fruits and vegetables are an important part of a healthy human diet, right?

While apples can provide some micronutrients that could be helpful it’s not likely to make a big difference since your cat should be getting these micronutrients from other sources. Instead, the biggest benefit that your cat might get from apple juice (or apples) would be in the form of antioxidants.

Antioxidants are a major health booster because they seek out and destroy cells called free radicals. Free radicals are dangerous because they can damage cells and even DNA.

What About Apples- Are They Safe For Cats?

Apples have all the same problems as the juice with one BIG additional problem: the seed of an apple contain cyanide and are toxic to cats. Luckily, the chances of a cat digging into an apple and eating all the way to the seed are pretty unlikely. But it’s still something to keep in mind especially if you’re considering making your own apple juice which may contain seeds.

So if apple juice isn’t a good option for cats what can our furry feline friend drink (besides water)? The best options are healthy and line up more closely with what your cat might actually eat in the wild.

All of these liquid treats can be mixed in with water or served plain. Let’s take a look!

Bone broth is not only healthy but also lines up perfectly with the kind of foods our carnivore kitties love! Bone broth is made from the bones, connective tissue and other remains of animals. While it’s pretty easy to make it take up to 20+ hours in the crockpot to do it right. I’ll typically only make bone broth around Thanksgiving after a big turkey meal but the rest of the year I take the easy route and just order some from Amazon.

This turkey based bone broth is my favorite (and it has a ton of 5-star reviews so I’m not the only one) and even if you don’t grab that one it’s best to stick with pet-specific bone broths or check the ingredients closely. Many bone broths will mix in onions or garlic both of which should be avoided for cats.

Even though our cats hate water they sure do love fish and tuna is a real feline delicacy!  Because of concerns around mercury poisoning you never want to overdo it with tuna but it will makes an a great occasional treat. Mixing some tuna water in with your cat’s normal water is a great way to not only mix it up at mealtime but also make sure they’re staying extra hydrated.

Just make sure you go for lower sodium options and stick with tuna that’s set in water (not oil). I always go with Wild Planet’s tuna and you click here to see the latest price on Amazon.

Yep, you can feed your cat goat milk and it’s actually becoming more and more popular! Cats are lactose intolerant as adults but goat’s milk has limited lactose and is therefore digestible even by cats. It’s also a great source of probiotics.

Most cats really like the fatty flavors and it makes an awesome treat! My favorite is this one from Amazon and it comes in a powdered form which makes it way more convenient to use as a treat now and then without having to worry about it going bad.

Because of the high sugar and carbohydrate content cats should avoid drinking apple juice. While a little likely won’t be an issue (and your veterinarian is the ultimate authority here) it’s not something you should regularly give your cat.

As a carnivore with a sweet tooth, it’s also not something they need!

Instead, focus on healthy treats that are closer to what your cat would naturally eat!

If you are here, you’re probably a cat owner and a big fan of large cats like the Maine Coon. It is evident that a large cat will eat a looot, and these gentle giants have earned their title as...